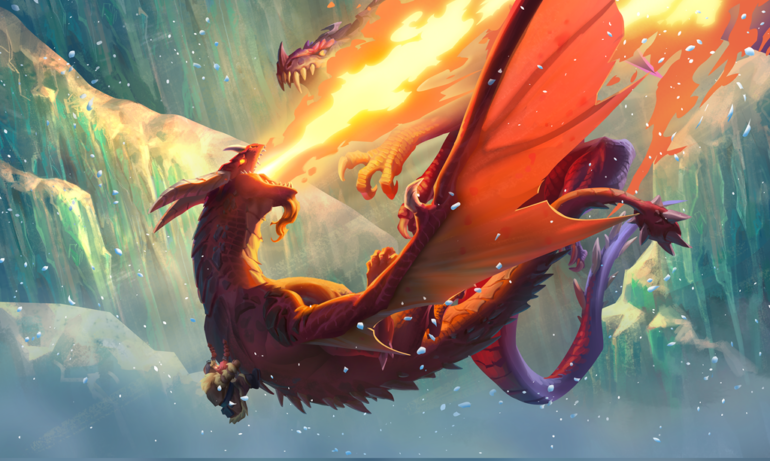 The tyrannical dragon Galakrond is warping the Hearthstone meta in the aftermath of the Descent of Dragons release last week. The powerful new Invoke mechanic, coupled with some of the best Battlecry cards of the past year, has led to a meteoric rise for the dragon lord that began in the first minute of the expansion.

But Galakrond hasn’t crushed every deck in his path just yet. Here are the top five decks in the Hearthstone meta right now.

At time of writing, Galakrond Shaman represents 48 of the top 50 decks by win rate and three of the top five decks by games played, according to HSReplay. It’s the top contender on Hearthstone Top Decks and the sole tier-one deck on HSReplay with a 59.68 percent win rate.

Simply put, the deck and its variants have all of the best cards in the game and it’s extremely difficult to overcome them. Galakrond’s Invoke power, Battlecry cards from the old Shudderwock decks, and other powerful cards like Mogu Fleshshaper put the finishing touches on a terrifying portrait of overwhelming power.

The deck is already slated for nerfs, according to Blizzard community manager Chris Attalus. But until then, Galakrond is the name of the game.

Everyone’s favorite hyper-aggro archetype is back in Descent of Dragons with a 55.02 percent cumulative win rate on HSReplay. A variety of new tools, like Skybarge and the powerful weapon Ancharr, have breathed new life into this aggressive build and allowed it to climb back toward some of its former infamous glory from late 2016 in the days of Patches the Pirate.

Although it isn’t quite as efficient as its older versions, the new edition of Pirate Warrior is expected to remain in tier two until players get a better handle on how to counter its explosive openings.

Hunter has been a major beneficiary of the new Highlander cards of the last few sets. But of the numerous builds using the single-copy format, the Secrets list has earned a 54.51 percent win rate on HSReplay.

A comprehensive suite of Secret-based annoyances chews through enemy resources before bombs like Dragonqueen Alextraza and Zul’jin devastate enemy boards and life totals. The most popular list is expensive, however, so be careful before trying to craft it.

This thematic deck rests at a 52.71 percent win rate on HSReplay and uses most of Rogue’s best mechanics to punishing effect. Classic combo payoff Edwin VanCleef presents a threat at every stage of the game with his stats quickly ballooning thanks to the 10 cards that cost one or less.

Descent of Dragons additions like Necrium Apothecary and Flik Skyshiv also add to the deck’s ability to create value while destroying enemy boards. The wealth of powerful Deathrattles incentivizes Rogue players to use Necrium Blade to double-up on these effects, too. This is another compelling option for players escaping the Galakrond Shaman nerfs.

Another Hunter list rounds out the top five for the first week of Descent of Dragons. Quest Hunter has a 53.72 percent win rate for all those Hearthstone players who just want to swing at their opponent’s face.

Unseal the Vault is a Quest that’s gained a lot of traction since its lackluster reception during Saviors of Uldum. And now, its surprisingly good matchup against Galakrond Shaman means that it’s time to play lots of little creatures. The late-game payoff of Ramkahen Roar turns each one of the small creatures summoned by the player or their Battlecry effects into a game-winning attacker and makes Sea Giant easier to summon. Since it’s popularity has been in part due to its Galakrond matchup, there’s no telling how this deck will perform after the nerfs come in.

It’s been a chaotic first week for the Descent of Dragons expansion, and with incoming balance changes, it’s only going to get more difficult to predict the state of play in the next week—let alone the next month. In the meantime, good luck to all of you sheltering from the Galakrond Shaman storm.