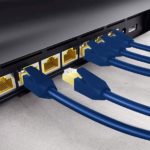 It’s hard to deny how much Wi-Fi has improved since it became available for mainstream usage in 2000. What was once a way to check emails slowly turned into our main gateway to the internet, and many use it to play games.

While Wi-Fi is robust and stable enough to ensure a smooth gaming experience, it just introduces too many variables to a simple equation. The Wi-Fi signal leaves your router’s antenna and makes its way to the receiver located inside your PC, laptop, or console, leaving possible rooms for error. Any malfunction in your router’s Wi-Fi system or your device’s Wi-Fi chip can directly affect your gaming performance by causing connectivity issues and ping. Even thick walls can slow down your connection, and that’s where ethernet cables come into play.

Not only do Ethernet cables assure the fastest and best possible connection quality by eliminating all the signal transferring, they also don’t get blocked out by any obstacles. Though you’ll need some next-level cable management skills to draw a cable from a router placed far away from your room, the results will speak for themselves.

Picking the best Ethernet cable for your needs can be more challenging than one would imagine since there are around four-to-five popular cable types that come in various lengths. You’ll need to do some serious measuring from your router to your gaming devices before pulling the trigger on one of them so you don’t end up with an overly long or short cable in your hands.

Here are the best Ethernet cables for gaming. 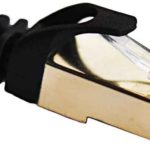 Most Ethernet cables are built to last. Each cat generation improves upon the successful formula and increases these cables’ lifespan alongside the top speeds they can deliver. Cat 7 cables are just one step behind the latest available cable technology, but they should still be more than enough for gaming and home/office usage.

Vandesail’s Cat 7 Ethernet cable features a shielded twisted pair, which increases its durability by a nice margin. The cable’s flat design allows users to get creative with managing their cables and enables under-the-rug setups. This cable supports up to 10 gigabits-per-second (Gbps) of download and upload speeds with transmission speeds of 600MHz. The clipping in the cable ends is an industry standard now, and they make sure the cable doesn’t get pulled off by error.

You can choose from cable lengths ranging from three feet to 82 feet, meaning there’s a version for every setup type. If you’re sitting close to your modem, a 6.5-foot cable should be more than enough, but you should measure to count in all the obstacles that might increase the length you need. 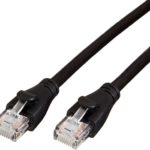 A vast majority of gamers still don’t have access to the type of internet that would require above-Cat 6-grade cables. Though the technology reached those speeds and frequencies, it’s still not commercially available in many parts of the world, and the performance differences at those super high speeds would almost be unnoticeable. An above-Cat 6-grade cable will still future-proof your setup with its life expectancy of nearly 15 years, but choosing to save a couple of bucks right now can also be tempting.

If you’re just looking for a quality cable that’ll let you take full advantage of your home network, then you don’t need to look further than AmazonBasics’ Cat 6 Ethernet cable. Cat 6 cables can handle frequencies up to 250MHz, on average, and support up to 10Gbps in terms of pure speed. The main difference between Cat 6 and 7 cables are their frequencies and the way they were built. While Cat 7 cords tend to have a tiny bit longer lifespan, Cat 6 cables should also be good for at least 10 years unless you have a bit of crushing them with military-grade boots regularly.

The AmazonBasics Cat6 cables come with various customization options, allowing users to choose from length options ranging from three to 50 feet. You can choose to buy them in bundles as well, which reduces the price for each cable, and you can never be sure when you can decide to throw a LAN party with the exact number of people your router has ports for. 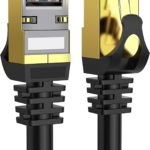 If the sky’s the limit for you, Cat 8 cables should have you set for multiple decades to come. It’s highly unlikely that the speeds and frequencies that these cables can deliver are available in any type of home setup right now. Getting a cable that you can gift to your grandkids someday, hoping they can take full advantage of a Cat 8 cable specs could also be a wholesome idea.

Cat 8 Ethernet cables support a frequency of up to 2,000MHz and can deliver speeds between 35/40Gbps. This means you could download a 40-gigabyte Call of Duty patch in eight seconds if you could match the maximum speeds that a Cat 8 cable offers. Glanics’ Cat 8 Ethernet cable comes in 15 different lengths. Starting from a foot-long option, you can even get a 100-foot-long cord, which would be the equivalent of three buses parked in front of each other.

Like the previous cable on our list, you can opt-in for the two-pack options for a better price for each cable, and there’s also an extra color option. 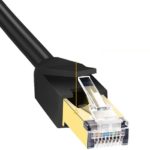 Glanics is another cable manufacturer that excels at Cat 8 cables. Like Dacrown, Glanics also comes with a variety of choices.

Deciding on your Cat 8 cable will also often depend on active discounts since they tend to be relatively expensive compared to Cat 6 and 7 cables. Between Glanics and Dacrown, going with whichever is cheapest at the time will often be a decent choice as both are decently built. 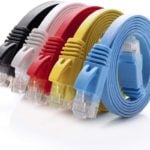 While other cables on our list are all at the top of their respective competition, the prices might still not be low enough for each cord even if you’re shopping in bulk. CableGeeker currently has the best bulk prices and features unique flat cable designs, which makes running cables under rugs a seamless process.

The variety of options looks endless with CableGeeker. You can choose from pack options ranging from three to 10. Cable lengths vary from 1.5 feet to 150 feet when it comes to CableGeeker’s Cat 6 offerings, and each features the core characteristics of a basic Cat 6 Ethernet cable. All can push up to 10GBps in terms of speed with frequencies up to 250MHz. Most packs also come in different colors, and you can choose from blue, yellow, red, white, or black.

Though you can get a pack of five with all different colors, it’s also possible to get a pack consisting of only one of the listed colors.

There are established brands in the Ethernet cable sector, but it’s also relatively easy to get fooled by a third-party seller while shopping in an unknown territory. The current industry standard for gamers is the Cat 6 cables, and it’s always a wise idea to test your speed/ping once you receive your cable to verify its capabilities.

If you’re scoring Cat 5/5e results with a Cat 6 cable or above, we recommend asking for a refund. If you don’t have the internet connection to verify an Ethernet cord’s capabilities, but you’re getting optimal results for your bandwidth, you should have nothing to worry about.

In cases where you aren’t able to use an Ethernet cable due to your router’s placement in the house, you can also try out Wi-Fi extenders which will boost your router’s signal power. This method is especially useful for players that have a weak Wi-Fi signal while gaming.