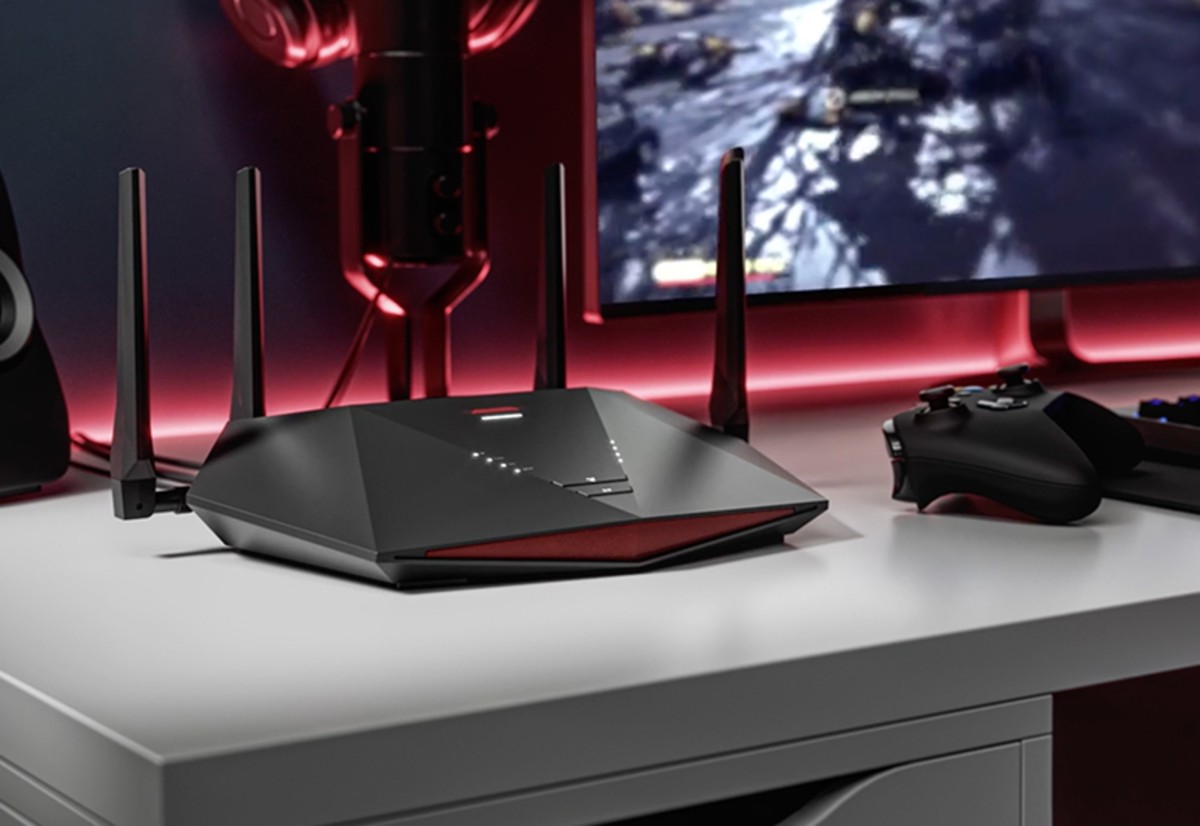 Competitive players who enjoy games like VALORANT and Overwatch know the importance of a fast and stable internet connection. When games are won or lost in milliseconds, players need the fastest speeds to keep up with their opponents.

The best Wi-Fi routers for gaming operate on the latest Wi-Fi standards and broadcast on multiple bands like 2.4GHz and 5GHz. Some routers even have high-speed 2.5Gbps LAN ports for players to connect directly with a LAN cable.

Other standard features include beamforming and MU-MIMO technology. Beamforming focuses the Wi-Fi signal toward certain areas instead of broadcasting in all directions. MU-MIM0 allows multiple devices on the network to send and receive data packets simultaneously. These technologies improve the way network traffic is handled and maintain stable and fast speeds for all devices.

Many of the best gaming routers have built-in software for better connectivity. Some can optimize connections to gaming servers to reduce lag, and others can even dedicate one Wi-Fi band to gaming traffic only.

These are the best gaming routers.

The Asus ROG Rapture GT-AX11000 is a top-of-the-range router designed specifically for gaming. It uses a 1.8GHz quad-core processor with 1GB RAM and 256MB of flash memory and has tri-band capability. Being Tri-band capable means the router broadcasts on three separate bands, including a 2.4GHz band and two 5GHz bands. One of its nifty features is assigning one of those bands as a dedicated gaming network and keeping all the other network traffic on the other bands.

One of the first things people notice about the ROG Rapture GT-AX11000 is its massive size. It measures 9.4 by 9.4 by 2.8 inches (LxWxH) and has a whopping eight antennas, with four for sending and four for receiving data. Users can also connect their devices using the wired ports instead of wirelessly. There are four gigabit LAN ports, a Gigabit WAN port, and a high-speed 2.5Gbps LAN port. Users can also use the two USB 3.1 ports for network devices like printers or storage drives.

Many software features on this router focus on fast-paced gaming. Game Boost monitors network traffic and prioritizes packets from gaming devices. Gamers Private Network improves the connections to gaming servers to reduce lag. The ROG Rapture GT-AX11000 comes with other software features like parental and traffic controls and Alexa compatibility.

Despite its outstanding abilities, the ROG Rapture GT-AX11000 has some drawbacks. It’s complicated to set up, and its 95-foot range might not be adequate for larger homes. This router doesn’t come cheap and is more suited for serious gamers.

Many users are still adapting to Wi-fi 6, but its successor, Wi-Fi 6 E, is already on its way.  This new standard uses a 6GHz wireless band with 1,200MHz of bandwidth. It’s a significant upgrade that offers up to seven 160MHz channels instead of the single 160MHz channel on Wi-Fi 6. Having more bandwidth means it can service more connections with higher data transfer rates.

Netgear’s Nighthawk RAXE500 is one of the first Wi-Fi 6 E routers currently available and is a great choice for users who want the fastest speeds and don’t plan to upgrade again anytime soon. Like the ROG Rapture GT-AX11000, this model uses a 1.8GHz quad-core processor and has 1GB RAM. The flash memory is higher at 513MB.

Compared to most routers, the Nighthawk RAXE500 has a distinctive shape. It has a full-black finish with a square shape, flanked on either side by huge wings with four built-in antennas. Like the ROG Rapture GT-AX11000, it’s fairly bulky, measuring 12.0 by 8.6 by 3.3 inches.

Many of the ports emulate the ROG Rapture GT-AX11000. There are four gigabit LAN ports, a single 2.5-gigabit port, and a gigabit WAN port. There’s also two USB 3.1 port for additional devices.

The Nighthawk RAXE500 features cutting-edge technology, but there aren’t many compatible devices to support it. Until more Wi-Fi 6 E devices are released, its impressive functionality is overkill. Buyers might also be turned off by paying almost double the cost of the ROG Rapture GT-AX11000 for a router that can’t operate at its full potential yet.

A single router might not be enough to cover larger homes. AmpliFi’s Gamer’s Edition is a complete package including a router and two wireless mesh points to extend the range. When the router and nodes are all activated, the system can cover up to 20,000 square feet.

This router covers a wider range, but it has lower hardware specs than the Nighthawk RAXE500 and ROG Rapture GT-AX11000. It has a 750MHz processor, 128MB RAM, and 32MB of flash memory. As expected, the data transfer speeds are also slower, with a maximum speed of 450Mbps on the 2.4GHz band and 1.3Gbps on the 5GHz band.

The AmpliFi Gamer’s Edition has a unique look that makes it stand out. It’s a black cube measuring 2.9 by 3.8 by 3.9 inches with a 1.6-inch LCD touchscreen. By default, the screen displays the time and date but also shows other system information like the IP addresses, port status, and upload and download screens. When it comes to connectivity, there’s a gigabit WAN port and four gigabit LAN ports. There’s also a single USB port and the USB-C power port.

Two satellites are included with the router. They each plug directly into the wall and can swivel up to 270 degrees for better reception. Users can also check the signal strength on each one by checking the LED indicators.

Users looking for wide coverage can benefit from the AmpliFiGamer’s Edition, but it comes with some disadvantages. It’s around the same price as the ROG Rapture GT-AX11000 but offers much slower network speeds. Some standard features on most routers, such as MU-MIMMO and beamforming, are conspicuously absent and might lead to network congestion and slower speed if multiple users are on the network.

Users looking for a Wi-Fi 6 capable router but don’t want to spend a fortune on the Asus ROG Rapture GT-AX11000 can check out the Netgear Nighthawk XR1000. This router has a 1.5GHz processor with 256MB RAM and 512MB of flash memory. As a dual-band router, it broadcasts a single channel on the 2.4GHz and 5GHz bands. It can hit speeds of up to 600Mbps on the 2.4GHz band and up to 4.8Gbps on the 5GHz band.

Like the Nighthawk RAXE500, the XR1000 features Netgear’s all-black design language. It has a flat, angular shape with red accents and four antennas. There’s no high-speed 2.5Gbps port like on the Nighthawk RAXE500 and ROG Rapture GT-AX11000, so users have to make do with four standard gigabit LAN ports and a WAN port. There’s also a single USB 3.0 port instead of dual ports like its rivals on this list.

One of the standout features of the Nighthawk XR1000 is its software. Users can monitor the router’s performance and optimize it for gaming through the Netgear Nighthawk mobile app. The app lets users choose gaming servers with the lowest ping, monitor network speeds, and allocate bandwidth to devices. Netgear includes the Armor anti-malware app, but it’s subscription-based and has a licensing fee.

Netgear’s Nighthawk XR1000 has decent gaming performance despite its drawbacks. This router is fast enough for gaming, and many users won’t mind the dual-band functionality and exclusion of a 2.5Gbps port.

TP-Link’s AX3000 is ideal for gamers looking for an affordable router with Wi-Fi 6 capability. It’s a dual-channel router that comes with the Intel AnyWan GRX350 processor and 256MB RAM. Users can expect speeds of up to 574Mbps on the 2.4GHz band and 2.4Gbps on the 5GHz band.

This router has a black rectangular look with angled V-shaped accents on the top and four antennas. Like the Nighthawk XR1000, there’s no multi-gig port, and users are limited to four gigabit LAN ports, a WAN port, and a single USB 3.0 port.

For a budget-friendly router, the AX3000 has decent software to improve functionality, like a built-in antivirus and QoS. The TrendMicro-powered antivirus stops threats from infiltrating the network, and QoS prioritizes gaming traffic to reduce lag. The router is easy to set up with the TP-Link tether app.

The AX3000 has decent performance considering its price. It costs less than half the price of the Nighthawk RAXE500 and ROG Rapture GT-AX11000, but it still has Wi-Fi 6 capability. Users may forgive the lack of a 2.5Gbps port and the limited range considering the low price.