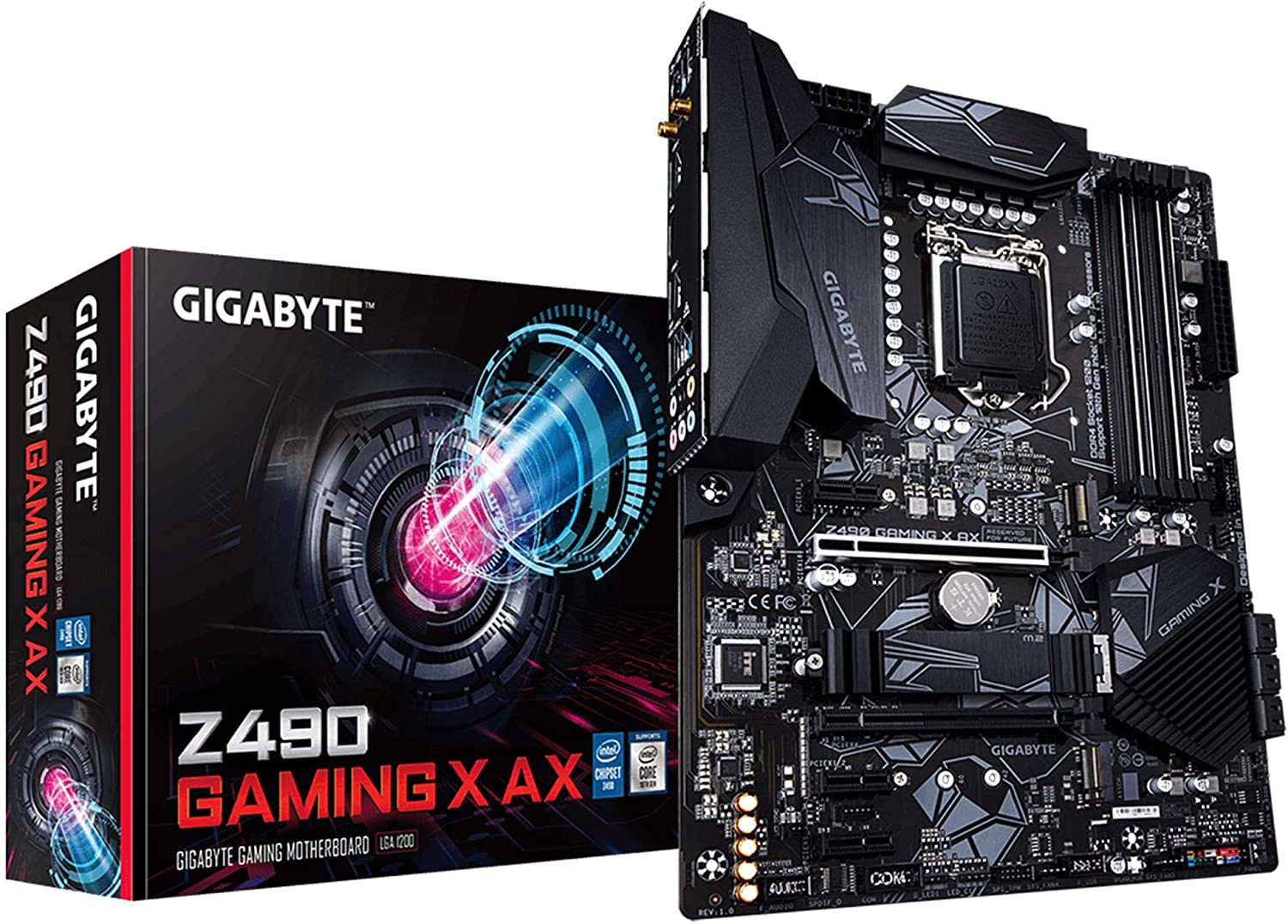 The motherboard is the foundation of any gaming rig, and it brings all the components together on a single interface. Top-of-the-range gaming motherboards offer outstanding performance, but they are expensive and add a significant cost to the build.

Gamers who don’t want to spend a fortune on a high-end motherboard can look at a budget option. Many budget gaming motherboards are available on the market, with many supporting the latest Intel and AMD processors. Buyers looking to save money might also consider previous generation motherboards because they are often cheaper than the latest versions.

These are the best budget gaming motherboards.

Intel recently released its 12th-generation CPUs, which promise more performance and better efficiency than the previous versions. The new CPUs don’t work on the older LGA 1200 socket used by the 10th and 11th-gen processors and instead use the latest LGA 1700 socket. Many companies have already released a range of Z690 motherboards to support the new processors. One of the most affordable gaming motherboards that supports 12th-Gen Intel processors is the Gigabyte Z690 Gaming X.

Since it’s more modern, the Z690 Gaming X has far better performance than the other motherboards on this list. It has a 16+1+2 phase voltage regulator module (VRM). The VRM distributes power efficiently to the processor and other components. When measuring the capacity of the VRM, the numbers before the plus sign indicate the amount of phases reserved for the processor, and the number after the plus sign refers to the phases powering the other components on the motherboard. The number after the second plus sign refers to the phase dedicated to the graphics card.

Apart from its VRM, the Z690 Gaming X shines in other areas. It has an HDMI 2.1 port and a DisplayPort 1.2 that are both capable of 4K resolution. The PCIe slot for the graphics processing unit (GPU) is also capable of the latest 5.0 speeds.

There are a couple of ways Gigabyte keeps the price of the Z690 Gaming X lower than its rivals. The motherboard has no built-in Wi-Fi, so users can either buy an add-on card or dongle. Compared to many Z690 motherboards, the Gaming X uses older DDR4 RAM instead of the latest DDR5 RAM.

Gigabyte’s Z690 Gaming X is one of the most affordable ways to get a Z690 gaming motherboard. While it may be pricey when considering that it needs a compatible processor, the cost is mitigated to an extent by using older DDR4 RAM instead of buying the latest DDR5 options.

Gigabyte’s Z490 Gaming X AX is a budget-friendly motherboard that uses the LGA 1200 socket interface. It isn’t compatible with Intel’s latest 12th-gen processors, but it can support the 10th and 11th-generation versions.

For a budget motherboard, the Z490 Gaming X AX has adequate performance with an 11+1 phase voltage regulator module (VRM). It also has ample slots for memory and other components. The four memory slots support a maximum of 128GB RAM and two M.2 slots for NVMe SSDs. There’s also built-in Wi-Fi 6 and Bluetooth 5 capability for better wireless connectivity.

While the Z490 Gaming X AX isn’t one of the fastest motherboards, it redeems itself in other areas. It’s compatible with 10th and 11th-gen Intel processors so users have more of a choice when deciding which CPU to pick. It also has built-in Wi-Fi and Bluetooth, so users don’t have to worry about purchasing add-on cards. Despite having no USB-C ports, the Z490 Gaming X AX is a solid choice as a budget Z490 motherboard.

As a Micro-ATX motherboard, the Prime Z590M-PLUS is a direct competitor to the MAG B550M Mortar. It has fewer VRM power phases at 8+1 but matches the four RAM slots with a 128GB capacity. Another area where the two motherboards are similar is the two full-length PCIe slots and two smaller PCIe x1 slots. Surprisingly, there are three M.2 slots instead of two, like on most motherboards listed here. The Prime Z590M-PLUS also matches the MAG B550M Mortar by including a USB-C port and a DisplayPort.

Like the MAG B550M, certain features were cut out because of the small form factor and to keep the price down. There’s no RGB lighting, but users can add their own with the pair of Aura-compatible headers. Compared to the MAG B550M, it’s disappointing that the Prime Z590M-PLUS only has a gigabit LAN port instead of a 2.5Gbps port.

While the Prime Z590M-PLUS isn’t a high-end motherboard, it still has enough features to make it appealing. It’s reasonably priced and easy to upgrade because it’s compatible with two generations of Intel processors. Like the MAG B550M, it can work in an ATX case or as part of a dual-system PC.

The Asus ROG Strix B550-F uses the AMD AM4 Socket and is compatible with AMD Zen 2 and 3 processors. This motherboard is slightly more expensive than the Asus Prime Z590M, but it has 12+2 power phases and additional features, like built-in WiFi and RGB lighting.

When it comes to design, the ROG Strix B550-F can match the more expensive Z690 Gaming X in certain areas. It has a built-in Wi-Fi 6 adapter, and it also supports the faster 2.5Gbps LAN speeds. The addition of a USB-C port is also an improvement over the Z490 Gaming X AX.

Another area where the ROG Strix B550-F beats the other boards mentioned so far is RGB lighting. This motherboard has an RGB ROG logo, and it comes with two RGB headers. One is a four-pin RGB header, and the other is a three-pin addressable RGB header.

For a reasonably-priced motherboard, the ROG Strix B550-F has a surprisingly strong feature set. It may cost a bit more than some alternatives, but the price is somewhat mitigated by including a Wi-Fi adapter.

There’s a noticeable difference between the ROG Strix B550-F, and the MPG X570 Gaming  Gaming Edge Wi-Fi when it comes to pricing. While both motherboards support the latest AMD processors, the MPG X570 Gaming Pro is cheaper because it has fewer power phases and a slower LAN port. It’s still a viable option for buyers looking for a budget platform for their AMD build.

Many buyers prefer smaller PCs because they take up less space. MSI’s MAG B550M Mortar is a Micro-ATX motherboard that uses the AMD AM4 Socket and is compatible with Zen 2 and 3 processors.

Most small form factor motherboards forgo certain features because of their smaller size. The MAG B550M Mortar has fewer power phases than any alternatives on this list with an 8+2+1 VRM. While it should be enough for some users, it’s not the best for high-performance rigs.

Despite its smaller size and budget-friendly price, the MAG B550M Mortar can still compete with more expensive motherboards on this list in some areas. It has four RAM slots with a maximum capacity of 128GB. There are also two M.2 slots, two full-length PCIe x16 slots, and two of the shorter PCIe x1 slots. Other surprising features for a budget motherboard include a 2.5Gbps LAN port and built-in DisplayPort.

There’s no doubt that the MAG B550M Mortar punches above its weight with its features. It’s the most affordable motherboard on this list, but it still has a 2.5Gbps LAN port and can handle up to 128GB RAM. Another benefit of this motherboard is that it’s small enough to work in an ATX case or as part of a dual-system rig.