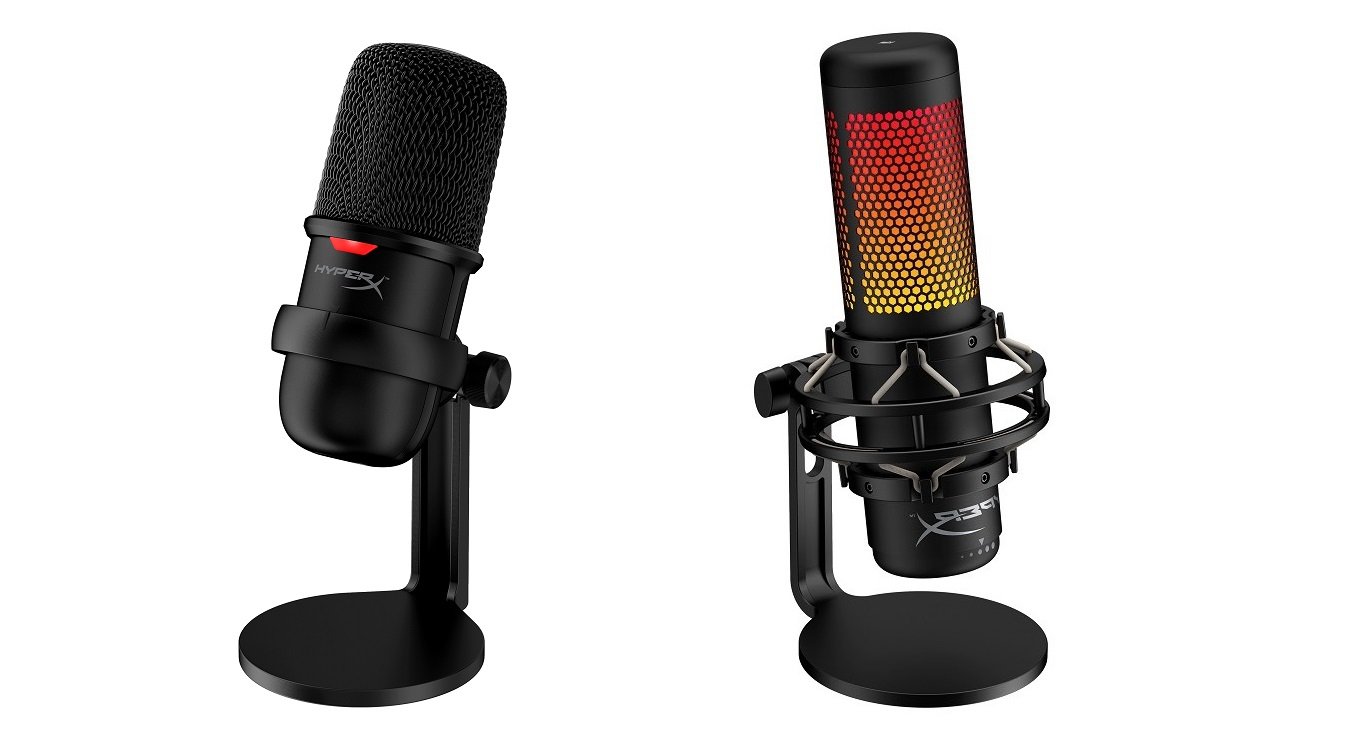 HyperX has gradually stepped its game up throughout 2020 and the company has made some particularly impressive strides in the audio portion of its peripheral lineup.

The SoloCast and Quadcast S are HyperX’s latest offerings to the audio space. And while both have drastically different roles, they provide exceptional value for their respective price points.

The QuadCast S is an electret condenser USB microphone loaded with a substantial list of features that place this microphone in the premium category. Dedicated to streamers, gamers, and the work-from-home crowd, the QuadCast S boasts a uniquely versatile skill set that’s suited for entertainment and beyond.

HyperX gave the QuadCast S a stunning exterior backed by custom two-zone dynamic RGB lighting effects and a built-in pop filter—making the design language of the QuadCast S distinctly HyperX. The microphone is paired with its own anti-vibration shock mount and is outfitted with a tap-to-mute zone function located on top of the microphone itself. While the first thing that will grab any prospective buyer’s eye is the microphone’s appearance, the real selling points of the mic are hiding in plain sight.

At the bottom of the QuadCast S, users will find a giant knob that serves as the microphone’s built-in gain control. This feature adds substantial value since there won’t be any need to Alt+Tab into Discord or TeamSpeak to adjust gain settings. The gain control knob will also be of interest to users who don’t wish to upgrade to a more advanced audio setup that includes a DAC/AMP combo. The adjustability and ease of access provided by the gain control knob add to the utility any type of user will experience with the QuadCast S.

Of course, the bread and butter of this release are the four types of polar patterns (pickup patterns) from which the microphone derives its name. These aforementioned patterns dictate how the microphone operates in terms of picking up sound. The four patterns that the QuadCast S can switch to on the fly are Omnidirectional, Stereo, Bidirectional, and Cardioid.

Omnidirectional will pick up sound from all directions and may be best suited for meetings or beginner podcasts with multiple hosts. Stereo will pick up sound coming from the left, right, and center, but not the back of the microphone. Bidirectional will pick up sound coming from directly in front and back of the microphone, making it an ideal pattern for two users sitting across from one another. Perhaps the most useful mode, in our reviewer’s experience, is the Cardioid pattern that takes in sound when speaking directly into the front of the microphone. The Cardioid mode provided our reviewer with the best overall quality and clarity. HyperX includes a visual guide to each pattern within the manual so that users will be able to visualize the best option for their current needs.

The company is also keeping up with the times by adopting USB-C as its connection type of choice. USB-C provides more power flow and transfers data a bit quicker than other types of connection. It’s also just less of a pain to plug in given its symmetrical design. Another forward-thinking addition is the inclusion of the tap-to-mute function that uses the built-in RGB lighting to indicate when the microphone is muted. While this type of niche feature seems like one more thing to go wrong, it feels right on the QuadCast S. Our reviewer has used lesser microphone stands in the past and it’s easy to tip over a microphone when pushing a mute toggle button without supporting it with another hand. Tap-to-mute just makes more sense when thinking of who this product is aimed at and feels like a feature that should be standard on products in this class.

One smaller but appreciated feature of the QuadCast S is the 3.5-millimeter headphone monitoring jack located on the back of the mic below the polar pattern knob. We’ve seen this feature on several other microphones from companies like Razer and Audio Technica, so it’s certainly not unique to HyperX’s products. The monitoring jack only adds to the ever-growing mound of value the QuadCast S provides buyers. In keeping with the smaller but appreciated features, HyperX also includes a mounting adapter. The adapter is compatible with both three-eighth inch and five-eighth inch connections. Be sure to double-check your mounting arms measurements before buying.

Lastly, the QuadCast is compatible with HyperX’s proprietary NGenuity software. Our reviewer has had some strong feelings about this software in the past but the QuadCast S takes nicely to the software and all the changes made were saved to the microphone with zero resistance from NGenuity. Users can adjust the headphone monitoring volume through the software. NGenuity also provides users with explanations of each polar pattern just in case users don’t feel like pulling out the manual to get reacquainted with the various patterns.

Being able to switch polar patterns on the fly with the twist of a knob provides substantial value. The QuadCast S costs $159.99, and while that’s quite the price tag, it’s worth every penny for users looking for a versatile microphone that dances well in any environment they might like to explore. Products like the QuadCast S indulge in creativity and may inspire users to try their hand at something new. Whether you’re starting a podcast, in a Zoom call, or streaming, the QuadCast S allows for greater freedom of movement between spaces and is a great option for those who see themselves doing a bit more than the average gamer.

The SoloCast is the more budget-friendly option of the pair, but it’s easily one of the best plug-and-play peripherals on the market. There’s nothing to the SoloCast’s setup and the quality out of the box is stunning, making the SoloCast an easy recommendation for beginners or anyone on a budget this holiday season.

Despite being a budget microphone, the SoloCast is also an electret condenser microphone similar to its older sibling but is limited to a Cardioid polar pattern. Another shared feature is the USB-C type connection, which isn’t too common among microphones in this price range. Prospective buyers may find other cheaper, non-name brand USB-C microphones, but the performance will likely be lacking. HyperX’s decision to outfit its budget-tier microphone with a USB-C connection makes the SoloCast stand out among some of the other quality budget options like the Razer Seiren Mini, which uses a recessed USB Mini cable.

Another carryover from the QuadCast S is the tap-to-mute function located at the top of the microphone. The front-facing red light indicates whether the mic is hot. A solid red light means the mic is hot and a blinking red light means the user is muted. As we mentioned in the QuadCast S review, the tap-to-mute function feels like the way forward in terms of mic muting.

On the bottom of the microphone, users will find a threaded connection for a three-eighth inch and five-eighth inch mount. Unlike the QuadCast S, the SoloCast doesn’t include the actual adapter to mount the microphone. While it would have been nice to have the mounting adapter included, it would have also been above and beyond what’s fair at this price point.

HyperX’s banger of a budget microphone includes a solid mount that offers a healthy level of flexibility. Users can turn the microphone from the upright position to both left and right horizontal positions. The included mount also offers the ability to angle the microphone up and down, allowing for better pickup. Having several points of opposability makes it extremely easy to adjust the microphone on the fly and makes the SoloCast feel like a premium product. In fact, the SoloCast is so impressive that if the QuadCast S wasn’t so decked out with features, this could pass as a mid-tier option.

The bottom line is that the SoloCast is one of the best budget microphones from a leading PC peripheral company. At $59.99, HyperX’s budget option oozes value that’s illustrated by its robust set of features and strong out-of-the-box performance. While each feature on its own may not be the most groundbreaking, the combination of USB-C, adjustable stand, tap-to-mute function, and true to form plug-and-play make the SoloCast one of the easiest products to recommend.