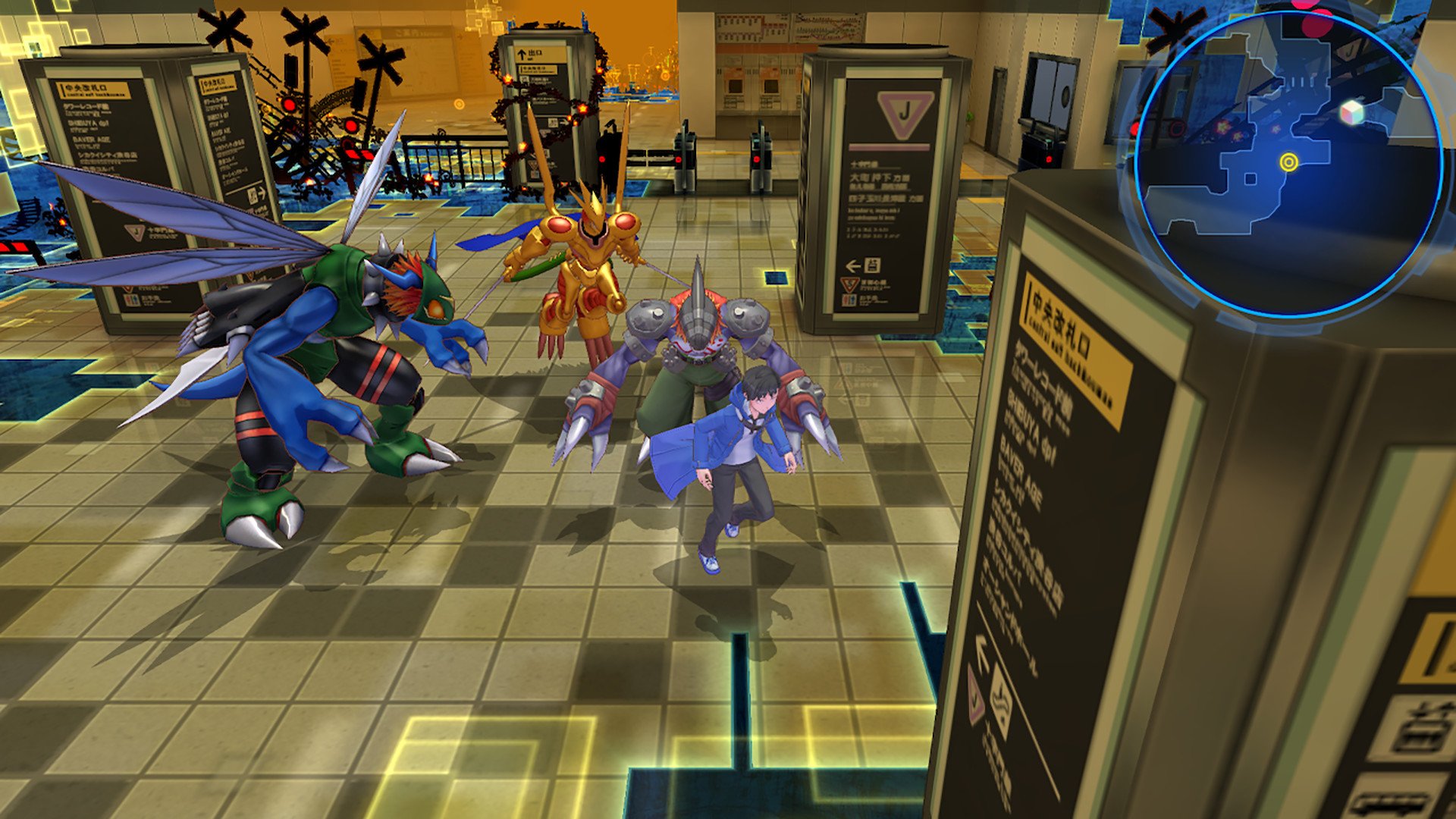 Unlike other gaming series, Digimon isn’t as straightforward in its storylines. Instead of the chronological order of one story, the Digimon series has two stories you can play through, both of which are still getting games added to their timelines.

If you are looking for a game that is more focused on story than gameplay, check out Digimon Stories, but Digimon Worlds raises the bar regarding world lore and gameplay. Without knowing the story, you wouldn’t know that you were not playing a different game series based on the gameplay. This can make it very hard to tell what game to start with or what to play next. They have only one major difference: their storylines. Both games usually share similar gameplay elements, but they follow different timelines.

Over two decades, these series gained a large fanbase. We’ve outlined where to begin the series and what to play next to make things easier. We’ll start with Digimon World and then move on to Digimon Stories.

How to play the Digimon World games in order

Digimon World starts the series with a staple of Digimon: Raising a Digimon from its egg form and making it a battle buddy. Players will be asked questions that determine whether they get an Agumon or Gabumon.

The objective is to locate all of the feral Digimon in File City, bring them back, and raise Digimon partners along the way. To fill the once-populated city with different Digimon from throughout Digimon World, you must train your Digimon and fight your way through all of Digimon World. With Digimon populating your world, they will start working for the city, making training Digimon easier; some even offer minigames for rewards.

Digimon World 2 takes a step back from its predecessor by being more of a dungeon crawler than a city builder. Digimon are not treated like pets in this game but more like Pokémon used to fight for the player character. Players must clear different dungeons of evil Digimon and trainers wanting to make the Digimon world worse.

Digimon evolve into stronger and newer forms as they grow in level. DNA Digivolution can also be used to fuse two Digimon and create a new one with higher stats and its parents’ techniques. Each Digimon has a level cap after which they can no longer gain experience, so the player must use DNA Digivolution to increase their level caps.

Digimon World 3 made a change in gameplay, just like the previous game, where it is now closer to a JRPG than before. Players are again forced to spend all their time in the Digimon world because they are trapped there. It’s supposed to be an online game, but a glitch won’t let the player character out.

The game has two primary modes of play: the overworld map and the battle screens. In this game, the player character navigates a 3D world map using sprites representing their character and their party of monsters. Each party consists of up to three monsters, which the player controls. In battle, players control their party, which fights with the opposing party.

In Digimon World 4, the series strayed the furthest from its original lore. Instead of using their powers, Digimon use swords and guns in this game. A virus has taken over the Digimon World and the player and three friends must save it. In this game, players could invite their friends to play with them, allowing for a co-op aspect of gameplay. Players unlock more Digimon as they play through the game’s levels, but you can beat the game with the starter Digimon.

This game did worse than any other Digimon World game in its time. Fans had difficulty keeping up with the constant changes in gameplay, and it wasn’t fun to be unable to use Digimon powers. The series revamped itself from here on out.

Digimon World came to mobile and went back to its roots. Once again, players would need to raise Digimon and care for them. Thanks to the improvement in graphics and gameplay, it was an entertaining game and really brought back the core aspect that fans of Digimon loved: raising Digimon as pets.

The Digimon were able to grow up, get sick, and be customized with accessories. Players can also wear accessories, which help them immerse themselves in the game. There was a pretty big world, and Digimon powers and Digivolutions were used in combat. All these things helped players fall in love with the Digimon World games again.

Digimon World: Next Order takes the gameplay even further than the previous game. There is now the possibility of having two Digimon at once and Digimon dying. If you fail to raise a Digimon correctly, such as meeting milestones for aging, it will collapse and turn into an egg. As a result, the Digimon will be stronger the next time it hatches, making it more of a rebirth.

Digimon World: Next Order is technically a sequel to Digimon World, but it doesn’t play like one, so it’s safe to play it last. It’s like trying to reboot a franchise with some established lore, and it’s better to play all of them than ignore them.

How to play the Digimon Story games in order

Even though Digimon Survive follows a similar focus on a storyline, it is still a standalone game and will not be on this list.

Digimon World DS is completely separate from any Digimon World title. This series focuses on the player’s story over the raising and taming of Digimon as pets. Players are Digimon tamers who discover, tame, raise, and train various Digimon. The player can build a Digi-Farm to raise, evolve, and communicate with Digimon.

This is a game based on the Digimon Data Squad anime (known in Japan as Digimon Savers) characters and settings appear in the game. As the player character, you will go to the Digimon World and fight an evil entity called unknown-D.

The Pokémon games have a hard-to-explain storyline that is separated in each game, and there is a bit more to it than having different legendary Pokémon. As Pokémon does, Digimon decided to do the same, but the change in the story is a whole lot bigger. To get the full experience, you’ll need both games.

Digimon from the Sunshine and Darkmoon districts mysteriously degenerate into Digi-Eggs due to a strange virus that damages access points to the Digital World. During the Dusk game, players take on the role of a Night Crow tamer from Darkmoon City, while during the Dawn game, they take on the role of a Light Fang tamer from Sunshine City. In both games, players are tasked with finding out where the viruses originated. The Digimon World title is irrelevant to the series and would be changed to reflect the new story focus.

Players will either be Shu or Kizuna based on their gender choice. They are Japanese fifth-graders who have just moved to a new district. A luminous object falls into the mountains during a fireworks ceremony, and a handful of kids see this. They are transported to the Digimon World along with Hiroyuki, Asuka, Yui, and Takuto, their classmates. Upon arrival, they meet their Digimon partners and are tasked with saving the world. Their goal is to help their Digimon companions beat a group of villains named Uno, Dos, and Tres.

It has an interesting storyline, and it leans away from the raising pets aspect of Digimon World.

In Super Xros Wars, many of the Digimon introduced in the Digimon Fusion anime are featured as part of a similar system to the previous Digimon Story games. Mikey Kudo is the player character, and many fans of the series will recognize him as a main character in the Digimon anime. You essentially unite the Digimon world by battling Digimon and bringing them to your cause. Depending on which game you buy, there is a different antagonist. Red’s antagonist is Nene, and Blue’s antagonist is Kiriha.

While Digimon Story: Cyber Sleuth – Hackers Memory sounds like an expansion, it is technically a sequel. Most storefronts sell the games in a complete edition, which sells the original and this sequel, but they play the same. There is only one change in the story, which takes place years after the original. To prove his innocence and clear his name, Keisuke Amazawa goes into the digital world to protect his loved ones.