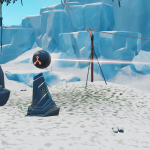 Three pedestals with a spherical rune on each have just appeared on the Fortnite: Battle Royale island. All of them are emitting a beam of light to different areas and are in different regions of the map. They appeared at the same time, about 24 hours after the second Loot Lake rune was spotted. The three spheres have the fidget spinner rune engraved on them in different colors: Purple, red, and green.

Trying to hit these pedestals will cause 50 damage to their shield, but no health bar appears. Hitting these runes seemingly causes them to rotate, and the goal is to probably make them all go toward the same spot.

The first sphere is the purple one on a hill north of Pleasant Park. Its beam points toward the west and stops on the Haunted Hills mountain. The second one is red and is on a small hill east of Polar Peak—and just like the first one, it also points west and stops on the huge iceberg where the Ice Castle is. The last one is on top of the volcano, and its beam points to the west as well toward the horizon.

These three spheres are most likely related to the activation of the second rune at Loot Lake. Once all of the beams connect, they’ll probably make the second rune activate and unveil the third rune on the metal plate over the hatch. The first rune already connected to the structure yesterday after traveling around the island.

Players have yet to discover what will happen once all five runes are active. This is probably related to the season eight ending, and activating all runes might lead to the opening of the hatch and reveal what’s hidden in it. We expect new developments from the runes and the season eight finale within the next couple of days.