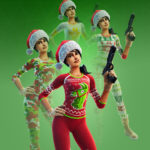 Epic Games adds new skins to the game with almost every patch. As well as new additions, existing skins also get shuffled into the in-game shop. This allows players to pick up skins that were available in the past but haven’t been accessible for a long time.

While some returning skins are welcomed by the player base, others typically don’t draw much attention. Most players will be familiar with the best someskins in Fortnite but not as many know about the worst.

Though everyone’s taste in Fortnite skins differs, some skins have been voted out and marked as the least popular skins in the game by the community. Fans voted on Fortnite skins via popular gaming site ProGameGuides.

The following skins averaged the worst ratings out of five stars. Here are the least popular Fortnite skins.

The Cozy Command set features some of the base Fortnite characters in Christmas-themed pajamas. While the concept is cool with different skins styles, most skin line entries average subpar ratings.

One of the main reasons behind this could be the red color scheme used in the base version of the skin, making them easier to notice in matches. 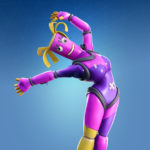 The Hot Air set includes two air dancers called Twistie and Bendie. Twistie comes in pink while Bendie rocks a green-blue color set. Both of these skins are at the bottom of the barrel when it comes to popularity.

Considering how advanced Fortnite skins have become over time with particle effects and well-designed outfits, Twistie and Bendie have just been outclassed by their competition. The design doesn’t feel special, and the eyes look a little bit scary as well.

Soccer skins were a welcomed addition to Fortnite—they quickly became one of the prime choices for sweaty players.

Combining zombies with soccer skins may not have been the best call, though, since skins from the Dead Ball skin set average a low rating across the board. While they feature a nice shade of grey, zombie footballers don’t make a whole lot of sense.

The Dominator skin is one of the original skins released during the first season of Fortnite. Due to their rarity, the community often likes skins around this period. But Dominator must have missed the memo.

For a season one skin, it has a low rating. The skin hasn’t returned to the in-game shop since 2019, but before that, it was a frequent visitor. The fact that the skin was regularly available in the shop may have decreased its rankings since it was quite a common skin to run into during the early days of the game.

Most of the skins on our list don’t cost much since they’re around the uncommon-rare price range. Flytrap, on the other hand, is a legendary skin, and it costs 2,000 V-Bucks. Considering the skin goes for a premium price, the absence of a backbling and harvesting tool has made players think twice about picking it up.

Players can purchase multiple bundles for the price or unlock a legendary skin that has more to offer, making Flytrap one of the least popular skins in Fortnite.

With an alternative style, Cutiepie is a rare skin that first became available in 2019. The base version of the skin has a cool look, but that quickly changes when the alternative style is equipped.

The masked version of the skin is on the creepy side. The skin still frequently visits the in-game shop, so collectors will still be able to add this one to their collection if they wish.

Epic has come up with some awesome skins, but that wasn’t always the case during the game’s early days. Skins, back then, didn’t feature special effects and didn’t include distinctive looks.

Most skins were just alternate versions of the base Fortnite characters. It probably didn’t make sense to pick up skins that were almost identical to the base characters, which could explain the low rating of Scout. 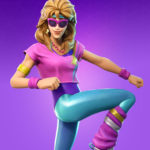 Aerobic Assassin and Mullet Marauder belong to the Spandex Squad set. Both of these skins average low ratings.

They come with a backbling and a harvesting tool, so they aren’t quite at the bottom of the barrel. One valid argument would be the average age of Fortnite players not understanding the reference the skins are trying to make.

Youngsters may simply struggle to appreciate their goofy looks.