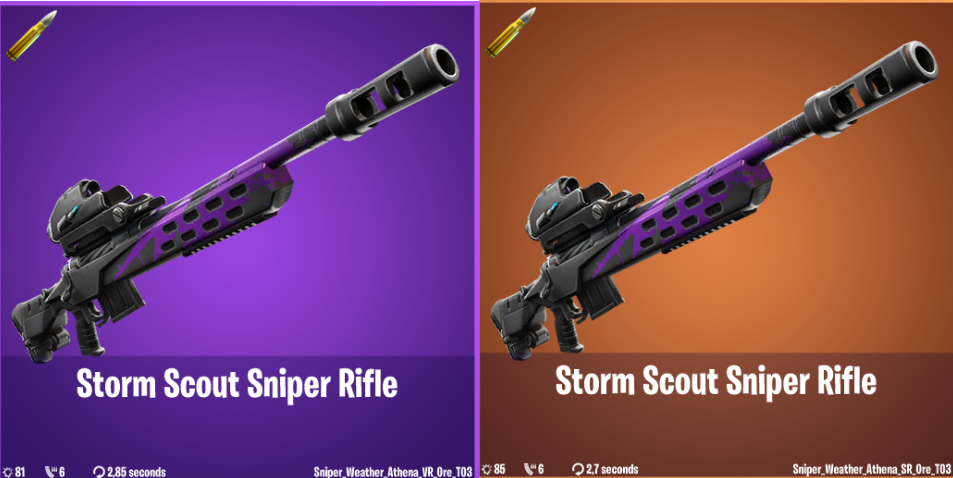 For Epic Games, there will never be enough Sniper Rifles in Fortnite: Battle Royale.

Dataminers found a new one hidden in the game files after today’s v9.40 update, the Storm Scout Sniper Rifle. Though we have yet to learn when (or if) this gun will be added to the game, we have some of its stats.

It will come in Epic and Legendary variants that will deal 81 and 85 damage per shot respectively. Both can carry six shots per magazine, so it’s probably a semi-automatic sniper rifle that allows players to shoot more than a single bullet before reloading. Its reload time is 2.85 and 2.7 seconds depending on the variant, which is almost the same as that of the Bolt-Action Sniper Rifle.

This snipers’ stats are not that great, but we might have a hint at what’s special about it from its name and color. Though the weapon’s functionalities are far from confirmed by either Epic or dataminers who found the gun, there’s a chance the Storm Scout Sniper Rifle will let players see through the storm when scoped. Currently, players who are inside the safe zone can scope to try to see players who are outside, but their sight is blurred by the purple effect of the storm. If the Storm Scout lets players see through it, it would become a great tool to punish players who are rotating late.

Assuming that’s what’s special about the Storm Scout, it would probably be a strong weapon for the early and mid-game at most. Players in late-game scenarios rarely stay in the storm or are caught by it, so a gun that sees opponents through the safe zone border would be nearly useless at this point. It could still be used as a rifle to simply deal damage to opponents who are in the safe zone, though.

This was the only weapon data miners found in the Fortnite v9.40 update files. Then, if it’s ever added to the game, it could come as soon as the next update drops next week.