Destiny 2’s Tracing the Stars questline sends players hunting for Atlas Skews in the Dreaming City each week. The search began on the Divalian Mists and advanced to the Strand and the Gardens of Esila. And now, it’s time for players to hunt the next Atlas Skews in Rheasilvia and inside Harbinger’s Seclude.

Like the previous weeks, the tooltips give players a good idea of where to find each Atlas Skew, though getting to some of them could be troublesome. Here are all the Atlas Skews in Tracing the Stars week three, in the easiest order to get them.

From the entrance to Rheasilvia, make a right and drop down on the right side of the bridge. You’ll find a cave and the Atlas Skew not far from you. Alternatively, you can go to the entrance of the Chamber of Starlight Lost Sector and head forward from there to see it on your left. 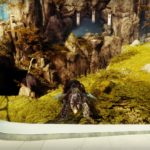 From the Atlas Skew in the lower level, look a bit to your right and you’ll spot a ledge in the distance. An Awoken Corsair is usually there, so holding out your Ghost and following the Patrol icon will give you an idea of where to go. 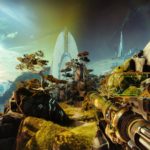 From this spot, head toward the entrance to Harbinger’s Seclude, but don’t jump in just yet. You’ll find the edge of a rock sitting near a bridge and it’s not a coincidence that it’s big enough for Guardians to jump onto it. We recommend bringing a sword for this part if you need a little boost and the third-person view is also helpful.

Hop onto the first stone, then jump to the rock in front of you (there’s a ledge on the left if you can’t make it). Jump across the gap and keep following the path until you get to another isolated big rock. From there, head toward the platform on the right, then jump on the seemingly slanted rock. Face left and you’ll see a ledge that leads to the secluded statue where this Atlas Skew is. 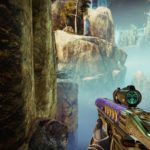 A Warlock with Heat Rises can make short work of this by heading to another statue from the end of Rheasilvia, close to the passageway to The Strand, and then making their way to the secluded statue.

Keep going into Harbinger’s Seclude until you get to the first wide area. Look to the long building on your right and head inside for an Atlas Skew right in front of a statue. 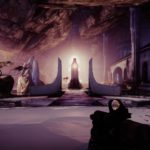 Follow the path to the last Atlas Skew and head inside. Instead of going toward the statue, however, turn around and head inside the corridor on the lower level. You’ll see an elevator shaft without the elevator. Jump down and break your fall, then follow the path to end in an open area. This is where you fight the final boss during the first Curse week and defeated the High Celebrant during Season of the Hunt. 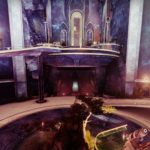 The last Atlas Skew stands on an altar between the two Ahamkara Skulls, where the final relic for the Broken Courier quest is on weak Curse weeks.