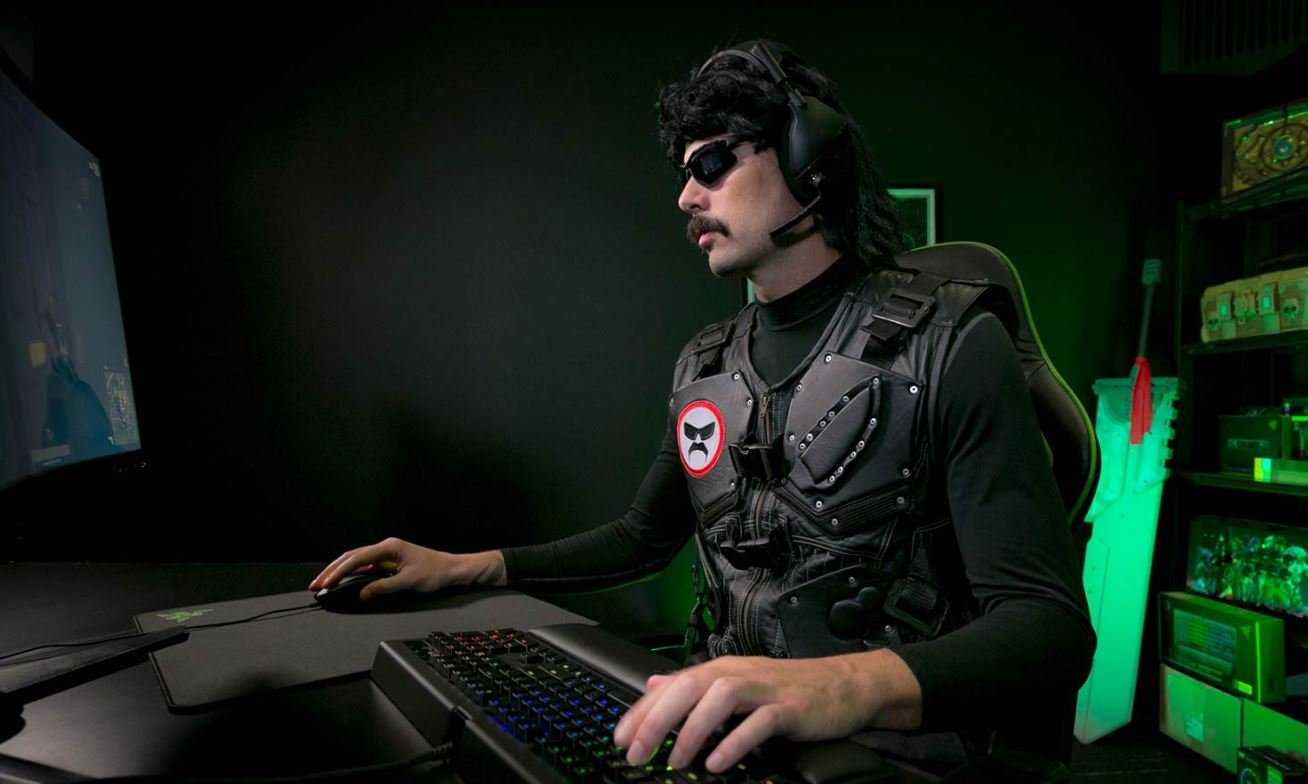 Originating from Encinitas, California, Herschel “Guy” Beahm IV is one of the most unique streamers on Twitch, but you probably don’t know him by that name. Using ridiculous amounts of violence, speed, and momentum, Beahm rose to Twitch stardom under the guise of Dr Disrespect and has been one of the faces of Twitch since the day he began streaming in 2016.

If you’re a regular viewer, then you may be familiar with the mantra of violence, speed, and momentum. The Doc repeats this relentlessly and seems to live by it, too. The 38-year-old uses a variety of streaming props that allow him to look like he’s riding a motorcycle, parachuting, ziplining, or flying in a helicopter. All of these visuals replicate mechanics from games that he streams.

What games does Dr Disrespect play?

In the early days of his streaming career, Doc’s go-to game was H1Z1 King of the Kill. After H1Z1 declined in popularity and PUBG came along, the “Two-Time” naturally jumped onto the PUBG bandwagon.

As new battle royales got introduced over time, Doc realized that he could never play the same game all the time and turned his stream into a battle royale compilation.

He even introduced a new challenge for himself, the “Triple Threat.” His triple threat challenge streams usually feature him playing PUBG, Fortnite, Apex Legends or Call of Duty: Warzone. He doesn’t move on to the other game unless he gets a win and ensures variety while doing so. This essentially reduces any burnout and satisfies all the viewers who want to see Doc playing their favorite game.

When does Dr Disrespect stream?

Dr Disrespect streams five days a week, with Saturday and Sunday being his off days. His streams usually last for eight to 10 hours and start around 12pm CT every weekday. If you’re thinking about tuning in, get your supplies ready since Doc hardly takes breaks and gets fed with a bayonet by his wife, Mrs. Assassin.

How much money does Dr Disrespect make?

Even though this is rather impossible to know since Doc doesn’t share his income with the public, we can still make some estimates.

As of March 18, 2020, the Champions’ Club has around 30,000 active subscribers. If we were to assume his subscription split is at $4, Doc probably earns around $120,000 monthly from subscriptions only. Keep in mind that this is also the minimum he earns, with his current number of subscribers. Not the mention that there are also three tiers of subscription levels.

On top of all that, he also has a successful YouTube channel with more than 1.4 million subscribers and big-name sponsors like ASUS, Roccat, and GFUEL.

Plus, Doc recently signed a contract with Twitch, which made him an exclusive streamer for the platform. Considering Ninja was offered somewhere between $20 to 30 million by Mixer, it’s fair to assume the Doc also shook hands on something even better with Twitch.

Who is Dr Disrespect’s editor?

During his streams, the Doc often refers to his editor as Alex, who gets yelled at and fired on a regular basis.

Alex actually goes by the name ThePeacePigeon. He was a former content specialist at Riot Games and an economics teacher before that. He’s known for his next-level video editing skills and gained the respect of Doc’s community in no time.

Why does Dr Disrespect wear a vest, wig, and glasses?

While streaming as Dr Disrespect, Beahm sports a black mullet wig, dark sunglasses, a tactical vest, and a mustache dubbed slick daddy that would put actor Tom Selleck to shame. Dr Disrespect, as a character, is similar to a pro wrestling gimmick.

In wrestling, a gimmick is a wrestler’s over the top, out of this world character. Dr Disrespect is essentially an excessive caricature of how male gamers see themselves. Besides the costume and his behavior, Beahm supports the character through unique set design and synth-wave techno music. All of this, combined with his over-the-top attitude and the fact that he’s actually a skilled gamer, makes for an incredibly entertaining stream.

Who is Dr Disrespect in real life?

Beahm wasn’t always a Twitch superstar, however. For most of his life, Beahm was focused on sports. His love for basketball led him to California State Polytechnic University where he played Division II NCAA basketball.

How tall is Dr Disrespect?

On his stream, the Doc regularly references being “the two-time champ,” alluding to the 93-94 Blockbuster Video Game Championships he won back in the days. He also reminds his audience that he’s 6 feet 8 inches tall on a regular basis, something that no doubt helped his basketball career.

How did Dr Disrespect get famous?

During college, Beahm was introduced to Halo and Halo 2. He discovered that he was incredibly skilled at shooter games and eventually fell in love with the genre. Beahm also discovered his love for talking smack online. Using Halo’s proximity voice chat, he quickly became a legend in the community for his hilarious trash talk. Operating under the gamertag “Diarrhea Panic,” Beahm spent hours refining his FPS skills and cutting promos on opponents in-game.

Eventually, Beahm changed his gamertag to Dr Disrespect. Although he probably didn’t know at the time, this was more than likely the best idea of his life. Beahm discovered a genre of videos gaining popularity where gamers would give commentary over their Call of Duty: Modern Warfare 2 matches. He loved the concept and decided that he had to take a swing at it.

Beahm went to a costume shop and purchased his signature wig, mustache, and glasses. He then made the first video of Dr Disrespect in character. The video was a play on the montage genre, which showed him talking smack over his Call of Duty gameplay—but it also cut to real-life video of him in costume. The video was a huge success and Beahm eventually signed a contract with Machinima, making him a partnered creator.

Machinima was one of the biggest gaming channels on YouTube and its content regularly included comedic gaming-based videos. Beahm’s YouTube career didn’t last long, however. In February 2011, he announced that he’d be taking a hiatus from YouTube to become the community manager at Sledgehammer Games.

Around the end of 2015, Beahm announced his departure from Sledgehammer. Shortly after that, the Dr Disrespect character resurfaced. Beahm began streaming in character, playing battle royale games. In the battle royale genre, players are grouped into an area with a high amount of weapons and the last person or team standing wins. This was the perfect game type for Beahm to showcase his skills, including his trash talk.

By the end of 2016, Beahm had driven the Doc character into superstardom. He was one of the most-viewed streamers on Twitch and had one of the largest subscriber bases, which he referred to as The Slick Daddy Club.

Does Dr Disrespect ever break character?

On rare occasions, the Doc does break character. These situations are either too funny for him to keep a straight face during or serious enough that he needs to make a statement about them from the heart.

In December 2017, he went live on Twitch not wearing his signature costume for the first time. He was noticeably upset and told his viewers that he had an announcement and needed to be completely transparent with them. Over the course of the two-minute broadcast, Beahm explained that he had been unfaithful in his marriage and he’d be taking some time off from streaming as a result.

While many fans were understandably unable to forgive Beahm for his actions, most stuck by his side. Then, in January 2018, like a phoenix rising from the ashes, Beahm uploaded a video to Twitter. In costume, with his wife, Mrs. Assassin, sitting on his shoulders holding a knife to his neck, Beahm announced the Doc would be returning on Feb. 5.

Moments after going live on Feb. 5, Dr Disrespect’s audience climbed to over 200,000 concurrent viewers. The Doc began to play PUBG, and as the game ticked on, so did his viewer count. Doc eventually peaked at around 388,000 viewers and even won his first game back on stream.

Who is Dr Disrespect’s wife?

Dr Disrespect’s wife goes by the name Mrs. Assassin and can be spotted on the stream quite regularly. She has an Instagram account that features the Doc’s adventures outside of his stream.

The Doc often receives calls from her on his flip phone and she sometimes feeds him snacks with her bayonet knife. Occasionally, their kid, “Baby Assassin,” also makes appearances on the stream.

If we put the deals worth millions of dollars aside, he’s just a man who deeply loves what he’s doing. It can just be seen on his face in the events he gets invited to and everything he does. At the 2017 Esports Industry Awards, Beahm explained how he constantly gets messages from fans who have been through real-life hardships, such as depression or war, and talked about how they say he helps get them through the chaos. While mentioning this, Beahm was noticeably touched.

It’s obvious Beahm enjoys his job for more reasons than just the money. Because of this, it’s safe to assume that the Doc won’t be going anywhere in 2020 unless he accidentally streams from a bathroom again.

After all, even though it may look like he’s reached the top of the mountain, he’s really only halfway up. Think about it.