Just a couple of days before VCT Champions kicks off, Riot Games has revealed a limited-edition set of apparel now for sale to celebrate the first official VALORANT world championship. 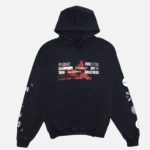 The items are all available now from the Riot Games merch store. But like any limited-edition drop, they’ll only be available as long as stock lasts—and Riot’s merch publisher confirmed that the items won’t be restocked when they sell out.

The items range from $85 for the hoodies, $45 for the long-sleeve T-shirt, $35 for the short-sleeve T-shirt, and $30 for the dad hats. The announcement video included the official VCT Champions anthem “Die For You” by Grabbitz.

Riot has made other limited-edition collections for esports events in the past, including the most recent Worlds 2021. On that collection page of the store, you can see that a majority of those items are now listed as “Retired,” meaning that their stock has sold out and won’t be restocked.

Some fans are already replying to the tweet with order confirmation screengrabs, so move fast if you want to grab a piece of the “Art of Greatness” VCT Champions set for yourself. VCT Champions kicks off on Dec. 1.