There aren’t many details just yet regarding the schedule. The majority of the Overwatch League’s matches will be played at Blizzard Arena Los Angeles, with some road matches thrown in throughout the season to test out the city-based structure.

“We’re going to play a handful of matches in a few home cities this year,” Overwatch League commissioner Nate Nanzer said. The Overwatch League is expected to be fully city-based in 2020. Nanzer said the league will have more information to share about the road schedule next week.

Other schedule changes include a decrease of matches, down from 40 to 28 per team. Nanzer also said the Blizzard team will try patch Overwatch during Overwatch League breaks so that the league’s on the same patch as the live game—nothing can be guaranteed, however, Nanzer stressed. 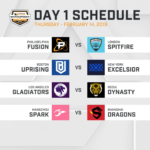 The Overwatch League’s All-Star weekend will also be pushed up between stage two, as announced in October.

A grand finals re-match will be held as the Overwatch League’s 2019 season opener. The match will begin at 6pm CT on Feb. 14. Both teams have made adjustments in the league’s off-season, but each roster has kept a core basis of players for 2019.

Boston Uprising vs. New York Excelsior will follow on day one at 7:30pm CT. Los Angeles Gladiators vs. Seoul Dynasty will be held at 9pm CT, followed by Hangzhou Spark vs. Shanghai Dragons at 10pm CT. On Feb. 15, Toronto Defiant will take on Houston Outlaws at 6pm CT, followed by Atlanta Reign, Florida Mayhem, Dallas Duel vs. San Francisco Shock, and Guangzhou Charge vs. Chengdu Hunters.