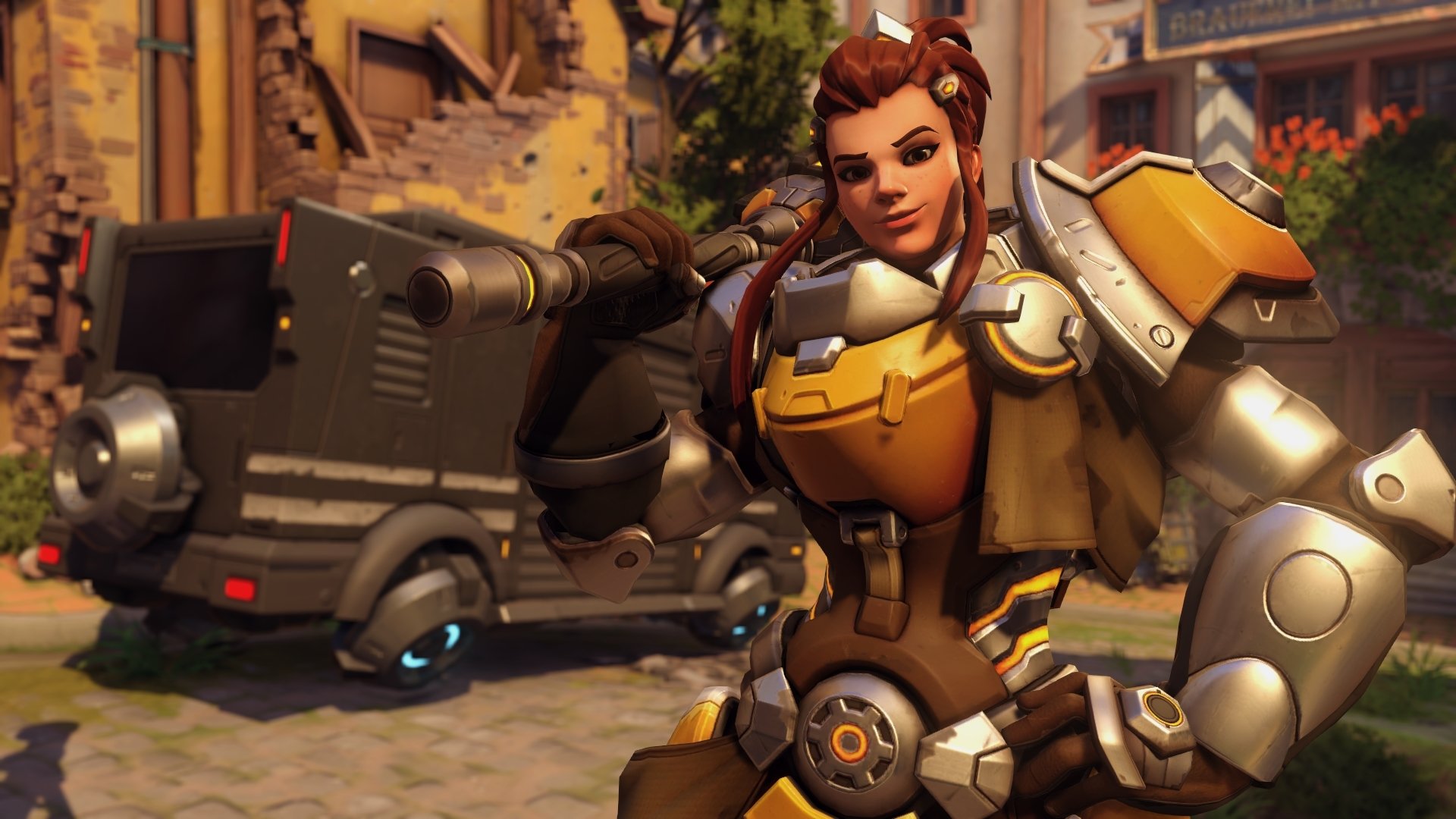 Imagine being born into Overwatch royalty. That’s exactly what happened to Brigitte Lindholm, as she’s the youngest daughter of Torbjörn, and goddaughter of his friend and fellow Overwatch member, Reinhardt Wilhelm.

Brigitte was the first of Torbjörn’s children to show an interest in mechanical engineering, spending much of her time in her father’s workshop. She was expected to follow in his footsteps, until things changed when she became inspired by her godfather Reinhardt’s tales of heroism and chivalry.

Before Reinhardt left on his adventures after the fall of Overwatch, she asked to become his squire. He accepted, and she soon became the 27th hero in Overwatch.

“The best offense is a good defense!”

Brigitte is a support hero, and her kit actually borrows a little bit from both Torbjörn and Reinhardt in a way. She is a good healer and can protect herself very well, especially considering her 250 health pool of 200 HP and 50 armor. Her offense and her defense go hand in hand in multiple ways.

Her primary attack is with her Rocket Flail, a melee weapon that does damage in a circular area in front of her. The flail has a range of about six meters and does 35 attack per hit, meaning it will take six hits minimum to kill a 200 HP hero.

The chain’s attack speed is a bit faster than Reinhardt’s hammer, but way weaker compared to his 70 damage per hit. She can protect herself with the flail, but it’s not a strong source of damage by any means. The rest of her kit, though, more than makes up for it.

On top of defending herself with the Rocket Flail, hitting enemies also creates an area-of-effect heal of seven meters that will heal herself and her teammates over time. This passive ability, called Inspire, is her main source of constant healing and heals 80 health total over five seconds.

“You won’t be disappointed.”

Just like her godfather, Brigitte utilizes a Barrier Shield. While Reinhardt’s protects his team, this one is more about keeping herself safe, as it’s barely bigger than her body frame. This is her main source of staying safe from oncoming damage, as it has 600 HP to protect her from all incoming frontal damage.

While holding up her shield, Brigitte can attack enemies with a Shield Bash that deals 50 damage. This is an incredibly useful ability for its stun effect, as it will knock enemies out of multiple attacks and abilities, as well as push them back a bit. This move is also very useful for traveling a short distance, like across gaps or to quickly move from out of spawn.

Teams will want to form up around her and protect her while she deals damage with the Flail in order to receive healing, or they’ll have to wait for one of her other abilities, Repair Pack. This is a direct heal where Brigitte will throw a Repair Pack at an ally to heal them for up to 150 HP. If the target is overhealed past their max HP, they’ll receive up to 75 armor for about five seconds.

The range on the heal is insane at 30 meters, so Brigitte can sit back a little bit and deploy the pack to flankers like Genji and Tracer to heal them up or give them an armor boost before they go in for an attack. The ability’s cooldown is six seconds.

Brigitte’s final primary ability is Whip Shot, a long-range attack of up to 20 meters. Brigitte will throw her flail a long distance to deal 75 damage and knock an enemy away from her. It’s an excellent way to push away flankers trying to come in for a kill, or to open up a push by throwing an oncoming tank backwards.

“I will prove myself!”

Brigitte’s Ultimate ability is Rally. When triggered, Rally gives Brigitte a speed boost, but more importantly, it begins to generate armor for all nearby allies within its seven meter range at a clip of 45 armor per 0.5 seconds, up to a max of 150 armor total. The armor won’t disappear until the ally takes damage again.

This ability will undoubtedly be used as a defensive maneuver, like as an answer to an enemy using their Ultimate. But it can also be used in concert with other hero Ultimates to help push an objective aggressively thanks to the armor and boost of speed it gives her.

The fact that the armor doesn’t disappear like it does with Repair Pack is huge, as the effects can be felt after a teamfight is won. Enemy players will return to the fight against enemies who potentially have a ton of armor to shred through, making Rally doubly effective.

She’s fairly strong at defending herself from flankers like Genji and Tracer thanks to both Whip Shot and Shield Bash, but good players will keep their distance and try to use agility to chip away at Brigitte from the sides of her small frontal shield.

Her ability to dole out armor will also be huge, as her Ultimate is an awesome anti-dive. Armor effectively halves incoming damage, so it’ll be a chore for some heroes to chip through that while also having to deal with her healing prowess.