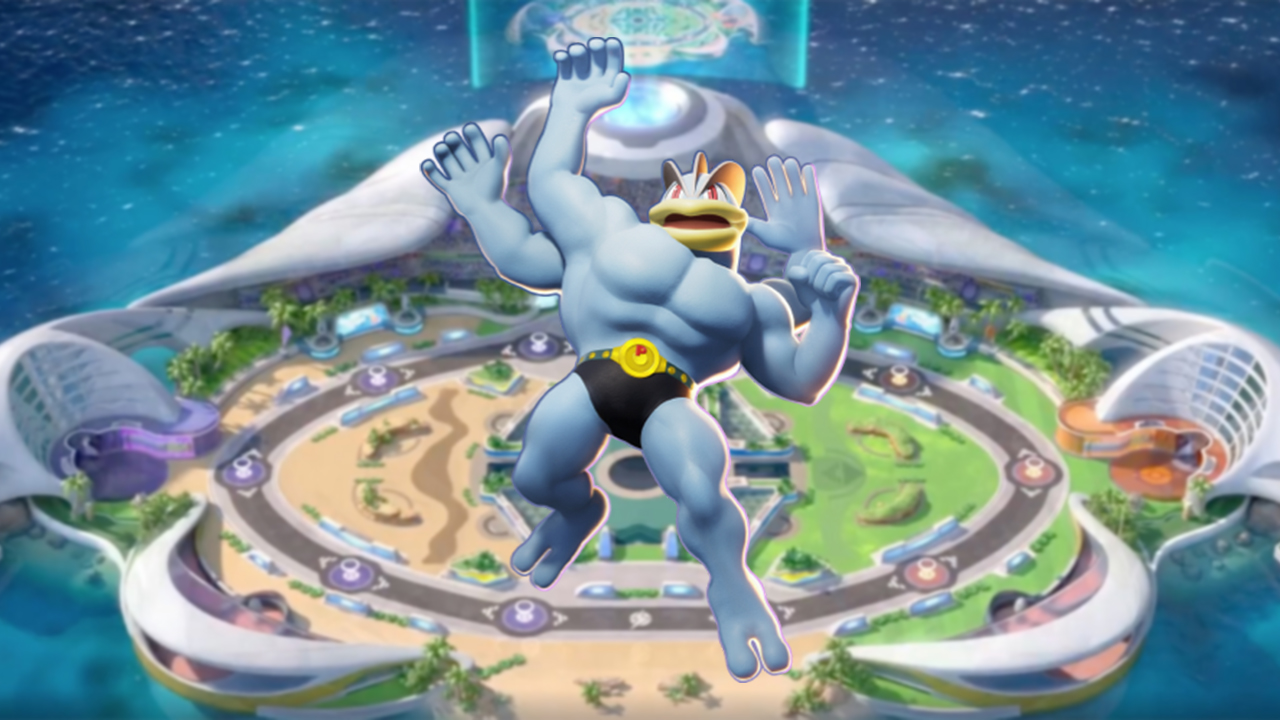 When people think of the term “well-rounded,” they may think it means being good (or at least decent) at multiple different things. And if that’s the case, don’t show them Pokémon UNITE’s version of Machamp, a Pokémon that excels in the right circumstances.

That’s not to say that Machamp isn’t a good choice, but getting the most out of the Pokémon requires the right player or team composition due to his limited, yet overwhelming, moveset.

As an All-Rounder, Machamp is meant to supplement its teammates, providing the ultimate option to swing a teamfight. The Fighting-type shines brightest when it can engage and clean up teamfights or catch other Pokémon on rotation in combination with a ranged attacker backing it up.

Machamp can be a force to reckon with if you can pair it with the right partner and let it loose. Players can unlock the brawler for 8,000 Aeos Coins or 460 Aeos Gems, adding a powerful option to their UNITE roster. If you like challenging yourself to thrive in a specific, yet key role, here is the best build you can default to for Machamp.

Regardless of what build you want to use for Machamp, the Muscle Band is a must because it gives an incredible boost to the Pokémon’s most important stat. Its Attack stat will get a buff, and its Basic Attacks will come out even more quickly, making it an even bigger threat.

Most players like to play with fire, running a Scope Lens to give Machamp a boost to its critical hit damage. This helps pile on as much damage as possible while pinning down opposing Pokémon, but it can melt even the bulkiest of walls when in tandem with the move Cross Chop.

If you don’t care about upping the crit chances, you could also swap this out for Leftovers or an Assault Vest to try and give yourself a bit more survivability.

A boost to movement speed and the Attack stat? Machamp players who love to rush down their opponents and throw them back to their teammates are already queueing up for this.

It seems most Machamp players like having the Eject Button equipped to keep a little bit of utility in their back pocket. The item can serve as another way to get in on tricky enemies, or as an escape tool when a push or teamfight is going poorly.

Most Pokémon simply go with their first offensive option once the game starts. Karate Chop is a simple, yet effective way to dismiss wild Pokémon and unlucky enemies that aren’t smart enough to stay away from an incoming Machop. It’s also better than Bulk Up.

This move slot is where Machamp really starts to show its potential. Cross Chop deals a massive amount of damage with a rushing motion and has a high chance to crit. Close Combat is also good, but most players like the more direct use for Cross Chop and the fact that it is harder to dodge.

Upgrade (Level 11): Increases Attack with each Basic Attack, up to a set max.

Your opponent is hardly safe when a Machamp has Submission because you can ignore basically everything, displace your target, deal damage, and stun them—all while boosting the next Basic Attack and increasing the speed of moves for a short time.

Seeing a Machamp use its Unite move and rush you down might be one of the scariest things in the game, because there is little you can do to stop it. The move increases the user’s movement speed, Attack, Defense, and Special Defense for a short time, and unleashes a powerful combo attack when used again.