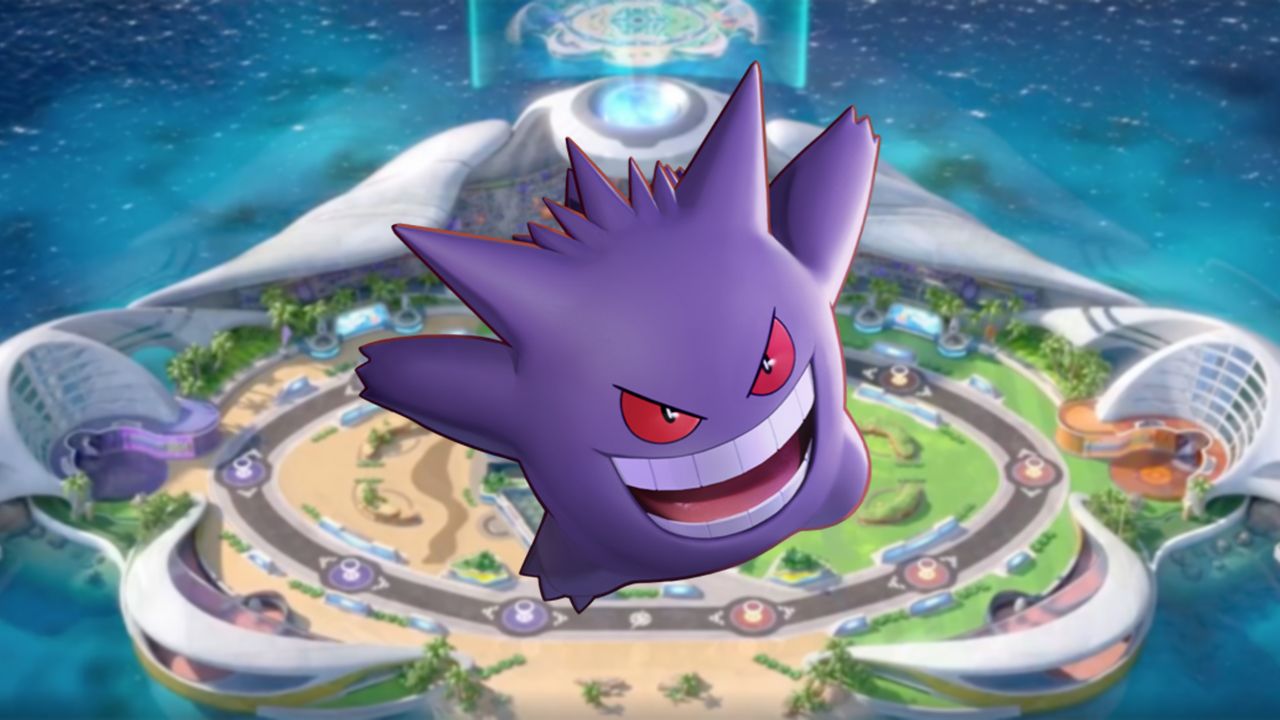 None of Gengar’s stats may look too overwhelming, but beware: the scariest part of this tricky Pokémon is its combo potential that will leave you looking at a respawn timer within seconds.

The Kanto region’s spooky ghosts, Gastly, Haunter, and Gengar, join the starting lineup of Pokémon in Pokémon UNITE and bring with them the tricks that made the trio some of the most popular Pokémon in the series. Holding true to their main series’ appearances, these Pokémon are quite frail but can deal massive damage if left unchecked.

These Pokémon are fittingly classified as expert-level Speedsters. Players just getting used to this line may often find themselves in bad situations due to the trio’s inability to survive in most fights, since they have one of the lowest defensive statlines in the game. With that poor defense comes an incredible potential for offense—though, as their expert-level classification implies, none of these Pokémon is easy to master.

Purchasing a Gengar Unite License will set players back a whopping 10,000 Aeos coins. To be sure that Gengar will be worth the purchase, players should try out Gengar and its pre-evolutions in the Practice Area.

With some of the best combos in the game, Gengar thrives within the jungle and being a constant nuisance to opponents all over the map. Here’s the best build for the Shadow Pokémon that takes advantage of its glass cannon potential:

Gengar’s attack power is high, but it could be higher. In Pokémon UNITE, all of Gengar’s moves are classified as special attacks, which makes the Wise Glasses the best choice to boost this type of damage. Even a small increase to its special attack can make a huge difference in its game-defining Sludge Bomb + Hex combo, so players looking to utilize Gengar should level up the Wise Glasses as much as they can.

Like other junglers in UNITE, Gengar struggles with self-sustain. While this isn’t a huge issue due to the sheer damage output that Gengar has, this lack of sustain may stop combos before they’re completed. Thankfully, this game’s version of the Shell Bell rewards Gengar for dishing out constant special attacks, granting it a little HP back each time one of its moves successfully strikes an opponent. And with the resets that Gengar gets with its kit, the Shell Bell will certainly be in effect often.

Since Gengar thrives within the jungle, it’s best to ensure that it can do so freely. The Float Stone passively provides Gengar with the additional speed it needs to venture from camp to camp and invade opponents in the side lanes. The Float Stone also boosts Gengar’s Attack stat in the process, but the increase will mostly go to waste since the brunt of its firepower comes from special attacks.

Gengar has very few problems clearing camps, but there’s always room to do so more quickly. With its vital stun and damage increase to Wild Pokémon, the Fluffy Tail is exceptionally helpful while Gengar is still a Gastly or Haunter and can’t use Gengar’s big combos. The item even pays off in the late game, since it will affect Drednaw and Rotom camps, and can even give you and your team an edge against Zapdos.

Gengar’s inability to open situations where the rest of its team can engage is another one of its flaws. If it doesn’t defeat an enemy quickly, Gengar may be on the receiving end of some unexpected visitors ready to take advantage of its low defenses. One way that Gengar can be a team player is by taking the Slow Smoke, which slows opponents in an area for a short duration. The item lets Gengar set up beneficial situations for itself that allow it to escape if needed and lets teammates capitalize easily on it as well.

The name of UNITE’s early game in the jungle is fast clears. While Gastly struggles a bit in early clearing, Will-O-Wisp provides additional chip damage with its burn on top of the damage the move already does to handily take down Ludicolo and Bouffalant camps. Should an opponent venture too far into your territory, it will also do enough damage to scare them away.

Gastly gains access to the powerful move Sludge Bomb when it evolves into Haunter. That takes away Will-O-Wisp’s burn chip damage and replaces it with Sludge Bomb’s poison. The change may not seem substantial at first, but it can unleash the true power of these Pokémon when combined with the next optimal move.

With access to both Sludge Bomb and Hex, Haunter and Gengar become unstoppable. Like in the main series titles, Hex deals extra damage to Pokémon inflicted by status conditions like poison. Since Sludge Bomb poisons opponents on each use, Hex will always do tremendous damage. In addition to this increased damage, Hex allows Haunter and Gengar to teleport to a targeted location and reduces its own cooldown after a successful attack—which makes this powerful combo available for use once more almost instantly.

Gengar’s Unite Move, Phantom Ambush, doesn’t do damage on its first use. Instead, it gives the Shadow Pokémon a dash and increased movement speed. If used again, however, it deals massive damage to Pokémon in an area-of-effect and slows their movement speed, which opens them up for further damage from the Sludge Bomb + Hex combo and ensures that Gengar is fast enough to catch its prey.