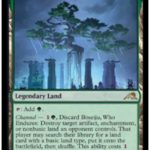 The release of Kamigawa: Neon Dynasty has generated a large amount of hype within the Magic: The Gathering community, showcasing several booster fun cards worth over $100.

The Kamigawa: Neon Dynasty (NEO) set taps into a blend of modernity and tradition via a large number of Artifact and Enchantment cards. Revisiting the beloved MTG plane of Kamigawa sees the return of Ninjutsu to Standard, as well as two new planeswalkers. Several booster fun cards from the set are worth over $100, featuring Showcase, foil-etched, Phyrexian, borderless, and extended-art versions.

Here are the Kamigawa: Neon Dynasty cards worth money, according to prices from MTGGoldfish, Card Kingdom, and MTGStocks.

Arguably one of the best cards and planeswalkers in NEO, The Wandering Emperor is a low-cost Mono-White planeswalker with Flash that doesn’t have an ultimate. The Emporer of Kamigawa slots into multiple Standard decks, from Orzhov Control and Midrange to Azorius Control and even Mono-White tempo. The Wandering Emperor shot up in value heading into the NEO Championship, increasing over 90 percent in just a week.

One of a cycle of five legendary NEO lands, Boseiju, Who Endures is expected to have a major impact on multiple Magic formats, especially Commander. The Rare land comes into the battlefield untapped and has the Channel mechanic.

Kaito Shizuki is another new MTG planeswalker within the NEO set who supports Ninjutsu shenanigans across multiple Magic formats. He has a home via multiple Commander decks and is seeing gameplay in the Modern format as well. There are four collector versions of Kaito Shizuki worth money.

Tamiyo, Compleated Sage is one of four NEO planeswalkers that was expected to have an impact on Standard, Limited, and other Magic formats. Her mana cost is unique, containing a hybrid/Phyrexian mana symbol. The planeswalker has a foil-etched Phyrexian version that is valued at around $50, with the non-foil version priced at $17. Tamiyo also has a borderless foil version priced at $28, and her regular NEO version is only worth $3.

Farewell is a solid wrath spell within the NEO set that is played in Commander, Standard, and Pioneer formats. The showcase foil-etched version of Farewell is priced at around $24 and the extended-art foil version is worth $17. Other versions range from $5 to $15.