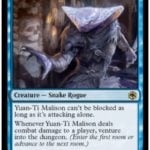 The second day of Dungeons & Dragons: Adventures in the Forgotten Realms spoilers revealed cards supporting the Venture mechanic, along with uniquely named and powerful creatures.

Around another 40 Dungeons & Dragons: Adventures in the Forgotten Realms (AFR) spoilers were revealed today. A few stand out from the crowd while others may become bombs within specific archetypes and formats. Dot Esports revealed its exclusive preview card, Dungeon Map, a three-drop mana rock with a paid ability to Venture repeatable times.

Questing Beast flashbacks came with the reveal of Froghemoth, and a trio of Legendary Rare creatures that support the Venture mechanic was revealed. Even the flavor mechanic “Pack Attack” showed promise via a number of AFR spoilers today.

Flying under the radar, Fly is a one-drop Blue Aura that supports the new AFR Venture mechanic. The Aura is similar to Curious Obsession and Flight and occurs at Sorcery speed. What sets Fly apart is that every time it deals combat damage to an opponent, the controller will Venture (either enter or advance a room within a dungeon).

Put Fly on another creature, like Yuan-Ti Malison, and combat damage to the player will reap two Venture triggers. At a pace like that, a player can complete an AFR dungeon, like Lost Mine of Phandelver, in just two turns.

Yuan-Ti Malison is a two-drop Blue Rogue who can’t be blocked when it’s attacking alone. As an added benefit, the 2/1 snake triggers Venture when Yuan-Ti Malison deals combat damage to an opponent.

Zariel, Archduke of Avernus is the third of five planeswalkers within the AFR set. The fallen angel will likely shine within Aggro builds that like to go wide, like Goblins. Zariel pumps the board with her plus-one while defends herself with a zero option. And the Archduke of Avernus creates an extra combat phase with her ultimate.

With a starting loyalty of four, it only takes two plus-one turns to hit Zariel’s’ ultimate.

Having Pyre of Heroes vibes, Oswald Fiddlebender sacrifices an Artifact to fetch an Artifact with a mana value equal to one plus the sacrificed Artifact’s mana value and then puts it on the battlefield. It operates as a Sorcery spell and is somewhat similar to Prime Speaker Vannifar. Likely not a strong card in Standard (looking at you Bonecrusher Giant), but it should perform well in MTG formats like Historic and Modern.

Unique and flavorful AFR names like Dragon Turtle continue to intrigue the MTG community. The three-drop Blue Rare has 3/5 stats and the keyword Flash. When Dragon Turtle enters the battlefield it taps and one target creature an opponent controls taps. They don’t untap during their controllers’ next untap steps.

Dragon Turtle will not set Standard on fire, but it should perform above average in Limited.

You Come to the Gnoll Camp

Modal reaction Instant spells continued to drop during today’s AFR spoilers with You Come to the Gnoll Camp, a solid two-drop in Red Aggro builds. Each response modal Instant spell contains two options, titled with a “flavor ability.” These abilities would normally exist on the card anyway and the name has no impact on Magic as a whole.

You Come to the Gnoll Camp allows a player to either prevent up to two target creatures from blocking that turn or pumping a creature +3/+1 until the end of the turn.

It turns out that Treasure Chest isn’t the only AFR card with a d20 roll mechanic. Several creatures were revealed today, including Chaos Channeler. Whenever the four-drop Mono-Red human shaman attacks with his 4/3 stats, his controller rolls a d20.

Grim Wanderer is a solid two-drop 5/3 that can get played as early as turn two. Able to enter the battlefield with Flash, it can only get cast if a creature died that turn. The goblin warlock is a solid card to have early on, especially in Limited, whose value drops the longer the game goes on.