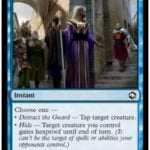 Scheduled to release digitally on July 8, the Dungeons & Dragons: Adventures in the Forgotten Realms (AFR) set will contain 10 “you” reaction Instant spells. Packed with D&D flavor, the Instant spells provide players with two choices upon casting. With titles like You See a Pair of Goblins or You See a Guard Approach, the two choices available on each Instant include options like pump counters, direct damage, Hexproof, and return a target creature to hand.

The You See A Guard Approach spell stands out from the other AFR reaction modal Instants revealed today. It’s a one-drop Blue Instant that can either tap a target creature or provide Hexproof for a target creature you control.

The other Blue reaction modal is You Come to a River. It should slot nicely into Control builds by providing players with the option of returning a target nonland permanent back to its owner’s hand or pumping a creature +1/+0 and preventing it from getting blocked until the end of turn.

White has a potential bomb reaction modal Instant via You Hear Something on Watch. The spell is a two-drop that can pump all creatures +1/+1 until the end of turn or deal five damage to a target attacking creature. And the Red reaction modal Instant revealed during today’s AFR spoilers taps into Goblin go-wide strategies. No Black and Green spells have been previewed yet at time of writing.

All images provided by WotC, Magic: The Gathering.