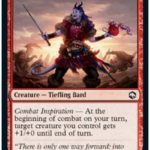 Normally, a powerful Magic: The Gathering color to build around in the Limited format, Red within Dungeons & Dragons: Adventures into the Forgotten Realms appears weaker than it has in past sets.

Red synergizes with Aggro archetypes within AFR, but with a few twists. The d20 roll and Treasure tokens are the two main mechanics within Red. Treasure matters decks might become a solid archetype in AFR Limited, Cards such as Jaded Sell-Sword and Price of Loyalty synergize well with the mechanic. And d20 also has potential, incorporating RNG for high and low rolls.

Treasure shells will likely work best with Black while Aggro synergizes with best with White. From a bard who pumps a target creature every turn to Pack Tactics shenanigans, here are the best AFR Limited Red Uncommon and Common cards.

Chaos Channerler is a unique four-drop that has potential within the AFR Limited format. The human shaman’s attack on turn five, and every attack thereafter, triggers a d20 die roll. Any roll exiles the top card and allows you to play it this turn. The roll number determines how many cards are exiled and can get played that turn.

The shaman is on the slow side with a toughness of three, leaving it susceptible to removal while reducing its chances of attacking multiple times. One attack and a high roll could have a major impact on a match, though.

Pump a target creature +1/+0 at the beginning of every turn with Valor Singer. The bard is a three-drop 2/3 who can chump block Aggro token builds while pumping up a creature with Flying or Trample on your attack phase.

Valor Singer is versatile enough that just about any color combination using Red should include the bard.

Hulking Bugbear is an ideal three-drop in Red Aggro. The goblin synergizes with Pact Tactics, an AFR flavor word mechanic, and is a good holder for Goblin Morningstar. In a goblin tribal shell, Hulking Bugbear becomes a solid threat when paired with Hob Boss and should work well in RG and WR builds.

Red gains ramp in AFR via Unexpected Windfall, a four-drop Instant. The Instants cost to cast includes sacrificing a creature and discarding a card—resulting in the cantrip of two cards and two Treasure tokens. Unexpected Windfall isn’t a top-four pick in Draft but will fit into a variety of archetypes due to its overall value.

Pairing well with Unexpected Windfallis is Red Dragon, a six-drop 4/4 Uncommon dragon. The Red Dragon has Flying and an ETB effect that deals four damage to each opponent. Slotting in as an alternative finisher, Red Dragon is a solid top-end card in RG creature builds.

Fitting into AFR Limited Aggro builds via the two-drop spot is Hobgoblin Captain. The barbarian has 3/1 stats and utilizes the flavor word mechanic, Pact Tactics. Decent as a two-drop, Hobgoblin Captain can become your opponent’s nightmare with Pact Tactics—gaining First Strike until the end of the turn.

Utilizing d20 roll upon entering the battlefield, Earth-Cult Elemental is a solid six-drop 6/6 finisher that disrupts an opponent’s board state. Rolling a one to nine results in all players sacrificing a creature while anything higher targets only opponents. High roll a 20 and each opponent sacrifices two permanents. 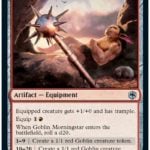 The color Red in AFR has two solid Equipment cards: Goblin Morningstar and Dueling Rapier. Utilizing the keyword Flash, Dueling Rapier attaches to its target creature upon entering the battlefield. Dueling Raper pumps for +2/+0 and has a downside of costing four when re-equipping on another target.

You See a Pair of Goblins

Swarming Goblins is significantly better when paired with Barbarian Class, along with Goblin Morningstar. Until AFR releases digitally on July 8, the verdict is still out on whether the d20 mechanic will be worth playing.