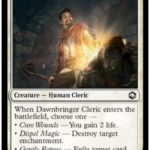 Get ready to take adventures into a dungeon while stacking the board against an opponent with the Magic: The Gathering color White in the Forgotten Realms Limited format.

Scheduled to release digitally on July 8, the Dungeons & Dragons: Adventures in the Forgotten Realms (AFR) set contains a number of playable White cards within the MTG Limited format. The color White synergizes with Venture, a new AFR mechanic, along with life gain builds, Aggro go-wide strategies, dragons, and dungeon hate. It also pairs best with Red, Green, and Blue.

From a half-elf cleric to multi-option combat tricks, here are the best Common and Uncommon White AFR cards in the MTG Limited format.

Aggro and go-wide builds will want Devoted Paladin, providing a solid secondary win condition with her enters-the-battlefield (ETB) effect. The orc knight is a five-drop 4/4 who pumps the whole team +1/+1 and grants Vigilance to them upon entering the battlefield.

Devoted Paladin has a rarity of Common and won’t impact the board state beyond her ETB. The orc knights 4/4 stats won’t break through blockers without some form of evasion or combat trick, reducing her value should Devoted Paladin’s ETB effect fail to hit for lethal.

White has at least 10 cards that support the AFR Venture mechanic and Cloister Gargoyle will be a solid addition within a WU deck. The gargoyle slows down Aggro decks as a three-drop chump blocker and can become quite problematic upon its controller completing a dungeon.

Cleric Class synergizes with WG Lifegain Aggro and Midrange builds. The Enchantment is a sub-type introduced in AFR called Class. Level one and two provide solid early and mid-game support while level three helps keep Aggro builds from running out of gas.

Dawnbringer Cleric slots into Lifelink White builds while also providing removal against decks using enchantments. The human cleric is a two-drop 1/3 with a rarity of Common. Upon entering the battlefield, its controller has three option abilities to choose from. Dawnbringer Cleric synergizes with Cleric Class and Celstrial Unicorn.

Rally Maneuver may be one of the best combat tricks in AFR, pumping one target creature while increasing the defense of another. The Uncommon rarity Instant spell also grants First Strike to the target creature getting pumped +2/+0 and Lifelink to the +0/+2 target. The only downfall to Rally Maneuver is its three-drop casting cost within a White Aggro build that wants cheaper combat tricks.

White Dragon is a six-drop 4/4 Flyer, equipped with an ETB effect that taps an opponent’s creature. A 4/4 Flyer for six mana is an average card at Uncommon. White Dragon’s value stems from its “Cold Breath,” an enter-the-battlefield effect that taps an opponent’s creature that won’t untap during its controller’s next untap step. It’s a solid AFR finisher that can pave the way for a go-wide board to attack for lethal.

You Hear Something on Watch

You Hear Something on Watch is another White Instant combat trick that can either pump the party +1/+1 until the end of the turn or deal five damage to a targeted attacking creature. It’s a two-cost multichoice spell that’s a solid main deck fifth pick if you’re playing White Aggro and a sideboard Instant in Control.

Triggering Venture as an ETB effect, Veteran Dungeoneer is a solid four-drop in White. The human warrior can block against Aggro while synergizing with other Venture AFR White cards. Veteran Dungeoneer also combos nicely with Teleportation Circle, an Enchantment that can blink Vertan Dungeoneer at the beginning of its controller’s end step.

Protect dragons with Ward with Dragon’s Disciple. The two-drop human monk in White has 1/3 stats and an ETB effect that pumps it +1/+1 if its controller reveals a dragon in their hand. Dragon’s Disciple is a solid two-drop in a shell built around dragons, providing protection via Ward and its toughness of four (with the counter).

Divine Smite is a two-drop White Instant that phases out a creature or planeswalker that an opponent controls. If that permanent is an MTG Black card, it gets exiled instead. Phasing completely erases a target and anything attached to it until its controller’s next turn. Divine Smite is a solid combat trick that can end games and prevent a beatdown.

Moon-Blessed Cleric is a solid three-drop within archetypes using AFR Class cards or other types of important Enchantments. Upon entering the battlefield, the 3/2 half-elf cleric fetches an Enchantment from its controller’s library, putting it on top.

Keen-Eared Sentry is an honorable mention two-drop in White dungeon hate. The 2/1 human soldier has Hexproof and prevents each opponent from venturing into the dungeon more than once each turn. Most likely a sideboard card in Draft, Keen-Eared Sentry could also have a major impact on the AFR Limited meta.

Update June 6 10am CT: This article was updated to include all AFR spoilers in the color White.