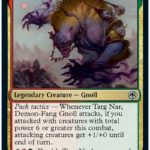 The colors Red and Green within Dungeons & Dragons: Adventures in the Forgotten Realms gang up for fast and wide attack strategies with the Magic: The Gathering flavor mechanic Pack Tactics.

Similar to the Boast mechanic introduced in Kaldheim, Pack Tactics synergizes with Aggro strategies, granting abilities when the creatures attacking have a total power of six or greater during that turn. Scheduled to release digitally on July 8 and globally on July 23, Pack Tactics has the potential to make RG Aggro a powerful archetype in AFR Limited and may even impact Standard after fall rotation.

Pack Tactics is only found on Red and Green MTG creatures, at a variety of rarities and creature types. From an Orc Ranger with Reach to a Legendary Draft signpost, here’s every AFR creature with the flavor word Pack Tactics.

Pack Tactics only appears in the MTG colors Red and Green, and Targ Nar, Demon-Fang Gnoll is the Legendary RG signpost for AFR Limited. With an Uncommon rarity, the Gnoll won’t be too hard to acquire in a Draft.

As a two-drop with 2/2 stats, Targ Nar is susceptible to a good amount of removal in Standard. Even in Limited, creatures with a defense of two don’t last long with a bullseye on their back. The Gnolls 2RG paid ability makes it viable, doubling Targ Nar’s power and toughness until the end of turn.

Possibly one of the most well-rounded creatures with Pack Tactics, Intrepid Outlander is a two-drop in Green with Reach and 2/3 stats. The orc ranger can block a number of pesky Flyers in Limited, and, as an added bonus, triggers Venture as its Pack Tactics ability.

Lost Mine of Phandelver synergizes nicely with the RG Aggro archetype, creating a Goblin token or Treasure tokens, adding +1/+1 counters or -4/-0 to a target creature, and drawing a card upon completion. Every attack made by Intrepid Outlander with Pack Tactics enabled triggers Venture.

Minion of the Mighty

See Minion of The Mighty on Amazon+

Several dragons have the potential to win games quickly upon entering the battlefield early courtesy of Minion of the Mighty. Old Gnawbone is a seven-drop Green Mythic Rare that produces mass amounts of Treasure tokens. Red Dragon is an Uncommon six-drop that deals four damage to each opponent upon entering the battlefield. And Green Dragon is a six-drop 4/4 that destroys chump blockers as an ETB effect. All three AFR dragons have the keyword Flying.

Aggro decks can run out of gas quickly, but with Werewolf Pack Leader, Pack Tactics triggers card draw. The human werewolf is a Mono-Green two-drop with 3/3 stats, making it a little harder to remove in Limited.

Gnoll Hunter is a solid two-drop in Green with 2/2 stats. With Pack Tactics enabled, the gnoll gains a +1/+1 counter. Within an Aggro build, Gnoll Hunter has the potential to attack with Pact Tactics enabled by turn three, potentially scaling to dangerous levels.

Synergizing with goblin tribal, Battle Cry Goblin is a two-drop in Red with 2/2 stats. It has a paid 1R ability that pumps all goblins +1/+0 until the end of a turn (synergizing with Gnoll Hunter). With Pack Tactics enabled, the goblin creates a 1/1 Red goblin creature token that tapped and attacking.

Tiger-Tribe Hunter is a finisher in the five-drop spot. The human barbarian has 4/4 stats and Trample. Tiger-Tribe Hunter likely synergizes best with goblin builds. Its Pack Tactics ability lets its controller sacrifice a creature to deal that card’s power to another target creature. Sacrificing goblin tokens that are pumped can take out a pesky chump blocker, creating room for a lethal attack in conjunction with Tiger-tribe Hunter’s Trample.