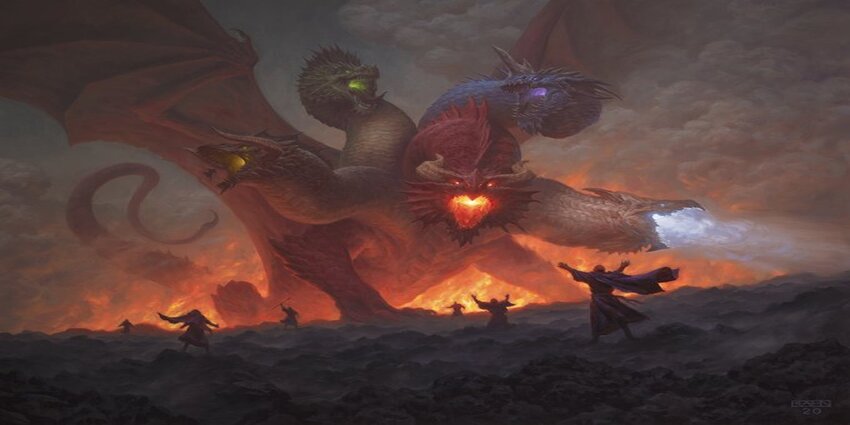 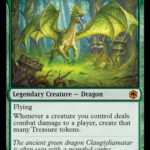 The upcoming crossover Magic set Adventures in the Forgotten Realms is filled with Dragon-tribal synergies to support Limited and Constructed strategies.

The third day of spoilers revealed two Mythic Rare Dragon cards that will dominate Limited games and be key finishers in a handful of Constructed decks.

Mono-Blue Tempo lists could use Lymrith as a top-end finisher. A Flying 5/5 threat with Ward 4 is hard to deal with in combat or with removal spells. It draws cards through combat damage, which is what most tempo strategies want. Lymrith is a Limited bomb with interesting Constructed implications. Jordan Uhl revealed this creature.

If a player resolves and untaps with Old Gnawbone, chances are they’ll win the game. The amount of mana this card generates is a massive advantage. Old Gnawbone is a 7/7 evasive threat that demands removal. Seven mana isn’t a lot for dedicated ramp decks. This spell was revealed by Mayuko Wakatsuki.

The key to Old Gnawbone is the ability triggers whenever a creature deals combat damage. This creature doesn’t need to attack to generate game-winning value. Look for Old Gnawbone to be a top-end win condition in Green ramp decks.

Adventures in the Forgotten Realms releases digitally on Magic Online and Magic Arena on July 8. A full tabletop launch is scheduled for July 23.