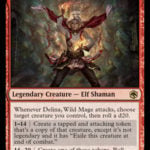 Dice rolling is a key part of Dungeons & Dragons gameplay but has only appeared in Magic: The Gathering through -Un sets, which are white-bordered “fun” sets. But in the D&D crossover Adventures in the Forgotten Realms, rolling a d20 is now in black-bordered Magic.

The inherent randomness of rolling dice is an adjustment non-Red players will have to get used to. Red is full of random mechanics, but other colors typically give you more information on the actions you’re about to take.

The cards in Adventures in the Forgotten Realms reward a variety of effects based on the number you roll. Some cards trigger on attack while others trigger with an activated ability.

The third day of Adventures in the Forgotten Realms spoilers revealed several dice-rolling cards that have Constructed implications. Here are some of the best d20 cards from today’s spoilers.

Delina is receiving an errata from the spoiled card’s text. On the current card, the third ability says “Roll again” but the card players will find in print says “You may roll again.” This change was announced by principal Magic editor Matt Takab on Twitter.

Delina will generate value if she can attack. Whatever you roll, the effect is productive. Most of the time, you’ll attack and get a token copy of another attacking creature. Combine this ability with good enter-the-battlefield abilities and you’ll generate a lot of value. Terror of the Peaks is a great creature to pair with Delina.

Rolling a 15 to 20 is less likely, but if you can create two more tokens from Delina’s attack trigger, you should win the game.

The Deck of Many Things

There’s so much going on with The Deck of Many Things. This card immediately pops out as a solid one or two of in Rakdos discard decks. Whether it’s Madness or regular reanimation, you’ll want your deck to be fine with the downside of potentially discarding your hand.

Unearth and Flashback spells will be good inclusions in a deck looking to run The Deck of Many Things. The one to 19 d20 abilities are good. Getting a card from your graveyard at random can be effective if you’re filling your graveyard with a purpose. Drawing two cards is fine.

Rolling a natural 20 is difficult to pull off, but if you do, it’s a game-winning effect. To roll a 20, you need to have an empty hand. If you can fulfill that condition and roll a 20, you can snatch a creature from a graveyard.

You’ll want to take a creature from your opponent’s graveyard because when that creature dies, its owner loses the game.

Blue players hate random effects. In a control deck, it’s important to have a plan and tilt the game in your favor. Contact Other Plane won’t be played in Standard until rotation, but it could be experimented with in several months.

This spell works because it’s an Instant. Half the time, it will draw two cards or Scry two then draw two cards. That seems fine for Standard, especially with the power level coming down with rotation.