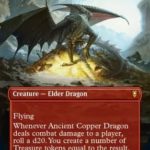 Tapping into the realms of Dungeons & Dragons, Wizards of the Coast has created a second Commander Legends set, Battle for Baldur’s Gate, containing several infamous Forgotten Realms characters who have been transformed into Magic: The Gathering cards worth money.

Officially released on June 10, Commander Legends: Battle for Baldur’s Gate (CLB) set had a prerelease Draft event take place prior to its launch that had initially valued what some of the cards were worth. Following the Baldur’s Gate official release, several major changes have taken place.

Here’s every MTG Commander Legends: Battle for Baldur’s Gate card worth money on the secondary market. Updates will take place on a monthly basis. All CLB card prices via MTGGoldfish, TCGPlayer, and MTGStocks. 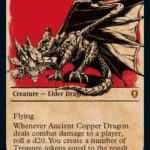 A cycle of elder dragons was included in the MTG Baldur’s Gate set, with several of those dragons worth over $100. Taking over the top spot of Baldur’s Gate cards to pull is the Ancient Copper Dragon. The elder dragon has a total of three versions, with the borderless foil version of Copper Dragon worth between $140 and $200. And the non-foil is valued at around $68.

The rule book Showcase version price dropped slightly since the CLB launch, priced at around $54. And the regular version of Ancient Copper Dragon has increased in value valued, worth around $54 as well. 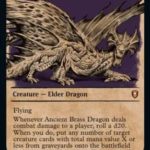 Ancient Brass Dragon was a the top of the singles secondary market chart list prior to Copper Dragon bumping the Ancient from the number one spot. The CLB dragon also has three versions, with its borderless foil valued between $55 and $200.

All other versions of Ancient Brass Dragon dropped significantly since the release of MTG Baldur’s Gate. The Showcase foil is priced at around $27 and the borderless non-foil is worth around $25, while the regular version is valued at around $15.

Rising in value since the release of CLB is the Ancient Silver Dragon. Its borderless foil version was once worth around $50 and is now valued at between $70 and $130. Seeing gameplay in a variety of Commander decks, prices for the other versions of elder dragon also increased since launch.

Champion of the poor Nalia de’Arnise has morphed into an MTG legendary creature within the CLB set. Supporting cleric, rogue, warrior, and wizard spells off the top of the library, the human rogue has only one version worth money. Regular versions of Nalia de’Arnise are only worth around $1, but her extended art foil is valued at $100.

Supporting attacking dragons via Goad while scaling in power, Firkraag, Cunning Instigator is in the colors Blue and Red. Similar to Nalia de’Arnise, the legendary dragon has a regular version worth around $3. But the extended art foil is valued at between $80 and $100.

Captain N’ghathrod of the Scavenger is all about milling your opponent’s stuff and then stealing it, like a true pirate. The legendary CLB continues the trend of having an extended art foil version worth around $100, while its regular version is only priced at between $4 and $5.

Supporting Party synergies within Commander decks is the legendary Orc Burakos, Party Leader. Since the release of CLB, the party leader has had its extended art foil version skyrocket to around $55. The regular version of Burakos, Party Leader is only valued at around $3.

Minsc and Boo first made their appearance within AFR, on a legendary card with Boo pulling sidekick status. Now they are both featured as a planeswalker card within CLB. The cuteness factor attached to the infamous duo was short-lived, though, with prices of the Baldur’s Gate planeswalker dropping significantly following the launch of the set.

The foil borderless planeswalker version of the pair was once valued at over $100 and is now worth between $30 and $45. Japanese versions are priced at around $20 and the regular versions of Minsc & Boo, Timeless heroes are worth around $10.

Dropping slightly since the launch of CLB but maintaining its value due to seeing gameplay in expensive Commander decks like Rocco, Cabaretti Caterer, Archivist of Oghma has an extended foil version worth between $40 and $50. Regular versions of the halfling cleric are priced at around $18 and its foil is $22.

Tasha, the Witch Queen’s extended art foil has fallen in price from around $50 to $27. Her non-foil borderless is priced at $13 and the regular version of Tasha is $6.