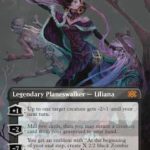 The Magic: The Gathering Double Masters 2022 set contains many reprints, including popular planeswalkers like Wren and Six, while giving older cards like Imperial Seal a first-time reprint.

The Double Masters 2022 (2×2) set was specifically designed to reprint powerful Magic cards, providing cards to formats like Commander, Modern, Vintage, Pioneer, and Legacy at a more reasonable price. It was also meant to have a playable set full of older cards that can get drafted via Limited 2×2 Draft events. Over 300 cards are contained within the MTG set showcasing new art via booster fun treatments, first-time reprints, and rarity changes.

From planeswalkers to spells and Enchantments, here are the best Double Masters 2022 cards to pull from a booster pack worth money. 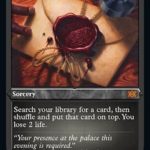 Rarely seen played in competitive or casual MTG games, Imperial Seal was first printed in the Portal Three Kings set. Getting its first reprint in the Double Masters 2022 set, Commander players are creating a wide variety of decks to slot in the Black Sorcery speed spell.

Several textured foil Double Masters 2022 Mythic Rare cards are worth money, including the planeswalker Liliana, the Last Hope. The Guilds of Ravnica Masterpieces foil version is worth around $100 while the 2×2 textured foiled version is valued at around $630 at the time of the MTG set’s release. A foil-etched version of Liliana, the Last Hope is worth around $60 and the regular is priced at about $20. 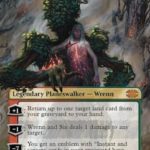 Six has officially retired to the afterlife within the Magic Multiverse, but the planeswalker duo is alive and well in the Modern format. A new booster fun treatment called textured-foil was used on the Wrenn and Six within Double Masters 2022, giving the planeswalker a projected value between $400 and $600.

Wrenn and Six also has a foil-etched version valued at around $150 and a borderless worth about $140. The regular version of the infamous planeswalker is priced at approximately $65.

The Eldrazi return in Double Masters 2022 with deep pockets via Kozilek, Butcher of Truth. Sporting the new textured foil look, the Eldrazi is valued at between $300 and $350. A foil-etched version is also over $100 at around $105 while the borderless is around $70. 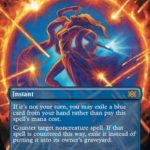 Initially printed in Modern Horizons 2, Force of Negation is getting new art and treatments within the Double Masters 2022 set. The Instant spell is popular within the MTG Legacy, Modern, Vintage, and Commander formats but has never had a borderless version until now.

A borderless foil version of Force of Negation has a projected worth of between $90 and $100. Its foil-etched version is valued at around $70 to $100, and the regular version of the Instant spell is priced at about $45. 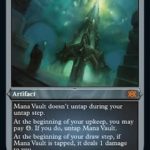 Mana Vault is a popular MTG Artifact often played within the Commander and Vintage formats. The Artifact has seen dozen of reprints over the years, ranging in price from $50 to $300. Mana Vault will get a foil-etched treatment in Double Masters 2022 with an expected value between $100 and $150, along with a borderless version that is projected to be around $150 as well. The regular version of Mana Vault will likely remain at approximately $50 to $55. 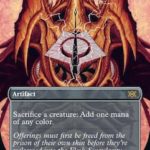 Similar to Mana Vault, Phytrexian Altar is a popular mana rock Artifact that’s seen fewer reprints. The Double Masters 2022 set contains a foil-etched Phyrexian Altar and a borderless version, with both having a projected value between $60 and $100. The regular version of the Phyrexian Altar Artifact is worth around $45. 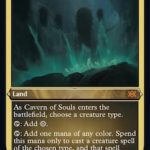 Played in the MTG Commander, Modern, and Legacy formats, Cavern of Souls is a popular land that has been reprinted several times. The land within Double Masters 2022 will undergo the etched-foil treatment, pricing it between $80 and $90. There’s also a borderless version of Cavern of Souls with a projected worth of around $90. And the regular version of Caven of Souls is priced at around $55. 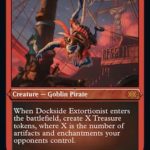 Sensei’s Divining Top is an Artifact that hasn’t seen a reprint in many moons. Within Double Masters 2022, Sensei’s Divining Top has a foil-etched version that players will want to pull, valued at around $100. There’s a borderless and regular version, worth approximately $40 for both versions.

Update July 7 11am CT: All Double Masters 2022 prices were updated for the official release.