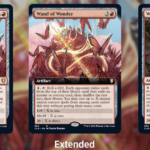 The release introduced several new mechanics to Magic, from dice rolling to class Enchantments. It featured key spells, characters, and monsters from Dungeons & Dragons, but there was plenty of room for expansion with how rich the universe is.

Magic returns to this setting with Battle for Baldur’s Gate, set for release on June 10. On Weekly MTG, Wizards of the Coast revealed several reprints and new cards that will be included in the set. Official spoiler season is still over a month away, with the start being on May 16.

Here are all the new cards revealed during Weekly MTG.

Minsc & Boo return after an appearance in Adventures in the Forgotten Realms. Some creative deck builders will look to forge a Hamster-tribal list and godspeed to them. The natural strategy that Minsc & Boo, Timeless Heroes supports is an aggressive Gruul list that looks to run Creatures with trample and haste. There are plenty of great options from Questing Beast to End-Raze Forerunners.

The -2 ability is a solid way to get that last bit of damage through to close out the game.

Dice rolling is back and Ancient Brass Dragon makes use of the mechanic in a unique way. This seven-mana Creature can hit hard and help rebuild your battlefield after opponents use their removal. It’s an expensive piece, but the potential rewards can greatly outweigh the seven mana cost.

Getting 10 or more mana value worth of Creatures back from any graveyard can completely flip the game into your favor. Look for Ancient Brass Dragon to make its way into Black decks from controlling to more aggro-focused builds.

Battle for Baldur’s Gate’s Buy-a-Box Promo is a seven-mana card that steals the opponent’s spells. The much-maligned Tergrid, God of Fright and Sen Triplets decks are going to love this card that can steal a player’s entire hand from them. The trigger is on attack, which gives players the chance to kill it before it generates any value, however, if the ability goes off the card advantage it generates is astronomical.

Decks that want to run Elder Brain will generally have information on what’s in the hands of each opponent. It’ll give you a good idea of who to attack with Elder Brain to steal the most effective spells for your purposes.

Wand of Wonder is solid, but gets better based on what kind of decks your opponents are running. If you’re facing a low-cost spellslinger list, it might only yield an Opt, which wouldn’t be worth the effort. However, some decks selectively run Instants and Sorceries and only include game-changing spells like Rise of the Dark Realms that, if you can cast it for free, can win you the game.

Any outcome of the dice roll seems to provide enough value to justify the four-mana activation cost. It’s a good card that can become great in the right matchups.