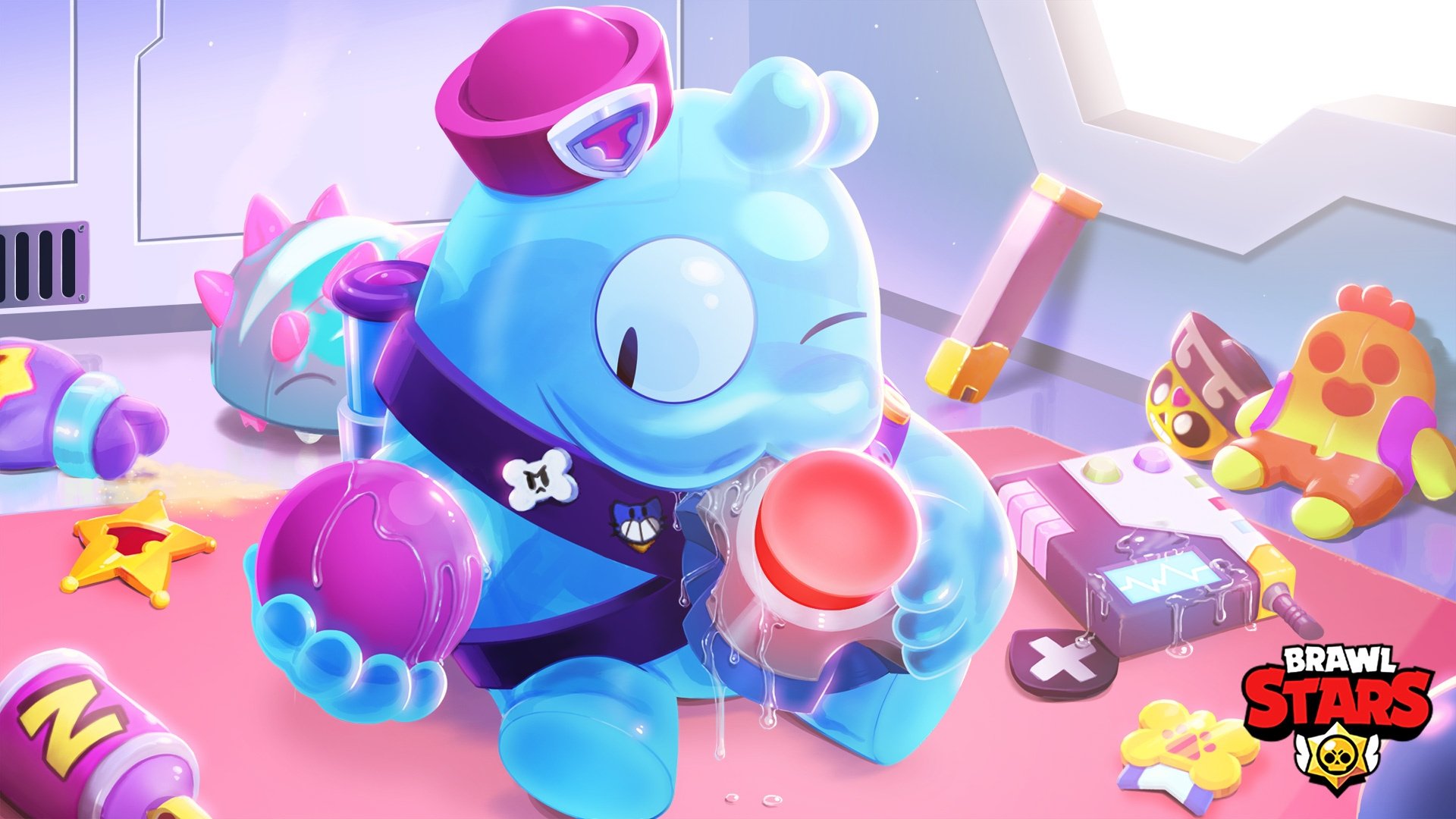 Squeak was introduced to Brawl Stars earlier today and will be available in the shop for a few days. After that, the Mythic-rarity Brawler will be only up for grabs in random boxes. Players who like throwers and bouncing projectiles should feel right at home with Squeak.

“As Colonel Ruff’s accidental creation, Squeak was born to play fetch,” his description reads. His pet equipment is reminiscent of Colonel Ruff’s style, including his purple hat and ball. He’s cute but also dangerous and players will have to watch out for his blobs in games.

His basic attack is called Sticky Blomb. It launches a “blob of goo” that sticks to the ground or to the target it hits, whether it’s an enemy or a wall. Then, it explodes after a short delay, dealing damage to a whole area. Enemies can also pick up the projectile if they get close to the blob, thus taking damage. It can result in their team’s demise if enemies with a blob stuck on them go near their allies.

After four hits, Squeak’s super “Big Blob” is charged up. It unleashes a bomb that explodes and divides into multiple small bombs that also deal damage after a short delay.

Squeak was released with one gadget and one star power. His gadget, Windup, increases the range of his next attack, while his star power, Chain Reaction, increases the damage of the attacks according to the number of enemies hit (10 percent per target hit).

Here’s what you need to know about how to play Squeak in Brawl Stars.

How to play Squeak

Squeak is an offensively oriented Brawler with medium range who can control zones and use environmental elements to deal AoE damage. He’s incredibly fun at all levels of play, so there’s no doubt that he’ll be picked by many players after his release. Players will have to get used to his playstyle, however, because the delays of his attacks require you to anticipate or predict rather than react.

Here are some basic tips and tricks on how to play Squeak.

Focus the enemies trapped in a corner

Like other Brawlers who have bouncing attacks, Squeak is the strongest on maps with a lot of environmental elements to play with. If an enemy is stuck in a small corner or path, he won’t be able to dodge Squeak’s AoE blobs and will receive heavy damage.

This can be a strong (and fun) strategy on other Brawlers, but not on Squeak. His attacks have a slow reload speed and he requires four successful hits to charge his super. If you don’t take the time to aim and anticipate where your blob will stick, you can miss every shot and become dangerously vulnerable to rushing opponents. It’s also mandatory to have an idea of his bombs’ delay of explosion to figure out if an enemy will have a chance to dodge his projectiles before launching them.

Choose your strategy carefully on how to use your super

Squeak’s super won’t be able to be spammed in one round because it requires four hits to be charged. You have to use it carefully. It can be used to finish cornered opponents, to control a zone in a game mode such as Hot Zone or Siege, or to defend yourself before dying to an opponent by throwing it on your path. It’s a versatile ultimate that can deal massive amounts of damage in the right situation.

One of Squeak’s main strengths is that he can confuse opponents with all of his AoE attacks, even more than some throwers. Opponents might panic when they see bombs that are about to explode on opposite sides or when their ally is approaching them with a bomb stuck on them. Take advantage of this confusion by taking control of the game. If you’re not playing Squeak but have one on your team, you’ll know you can rush your opponents when he’s about to unleash his super to fill an area with multiple bombs. Squeak can set the pace of a game, but he has to be played carefully to be useful to the team.

It’s still unclear if Squeak will quickly become prominent in the meta, like Stu and Belle did after they were released. His damage already received a nerf between his test period and his official release in the game. But Brawl Stars players will determine how much he’s used over the next few weeks. He’ll also receive one more gadget and star power in the future, which will likely give him more versatility.