Clash of Clans remains one of the highest-grossing mobile games of all time. Once Clash of Clans’ addicting gameplay gets combined with a sense of unity as you join a clan, it becomes tougher to resist the urge to log in daily.

While a funny name may have helped you put a smile on a few players’ faces when you were just starting to build your empire, you may prefer a more serious tag as you make your way toward the leaderboards. After all, your in-game name will essentially be your first impression on other players, so it may be a decent idea to pick a name that’ll strike fear into the hearts of your foes.

You won’t be able to change your name immediately after you start playing the game, however, since it requires a little bit of progression. If you’ve changed your name before, you’ll also need Gems, the in-game currency players can purchase with real-life money.

Here’s how you can change your name in Clash of Clans. 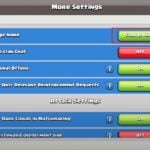 How can you get Gems in Clash of Clans?

If you don’t have enough Gems to change your name, you’ll be out of luck until you acquire some. Though the easiest way of getting Gems will always be buying them through the in-game store, you can also accumulate some by playing the game.

Harvest and open up the map

Getting rid of obstacles around the map will cost you gold, but you’ll get Gems in return. New obstacles tend to spawn every four hours, and you should be able to earn 40 Gems from approximately 12 obstacles.

Considering you can destroy a maximum of 21 obstacles every week, you can easily net yourself 40 Gems by doing this.

You may notice a box filled with gems as you’re doing your daily tasks around the map. Opening it up will grant your 25 Gems, and you’ll get a new box every week.

Despite being a small amount, this will add up over time, and the Gem box itself can help you change your name for the second time in 20 weeks.

As you play more Clash of Clans, you may forget about checking your achievements. Most of them reward gold and experience, but some will also give you Gems.

Go through your attachments and see if there are any you missed to collect its rewards for.

Build and upgrade your Gem Mine

Gem Mines may look less than ideal since they’re gradually slow at digging out Gems, but it’s another passive Gem income that should increase your overall Gem count in the long run.

Upgrading your Gem Mine should be at the bottom of your list, however, since there will be more substantial buildings you’ll need to upgrade first.

After you upgrade your Town Hall to level size, you’ll be able to participate in Clan Games. They usually take place from the 22 to 28 of every month.

The prizes can include Gems, or you’ll also have the option to trade in your winnings for Gems.

Social media platforms are filled with accounts that claim to be giving away free Gems. Almost all of these attempts will be scams that will try to phish your username and password. If you want free Gems, stick to the known methods and refrain from clicking any suspicious links.

Before you change your name, make sure that your new tag doesn’t violate any rules set by Supercell. Offensive names can get you banned, and repeated occurrences can result in permanent actions.