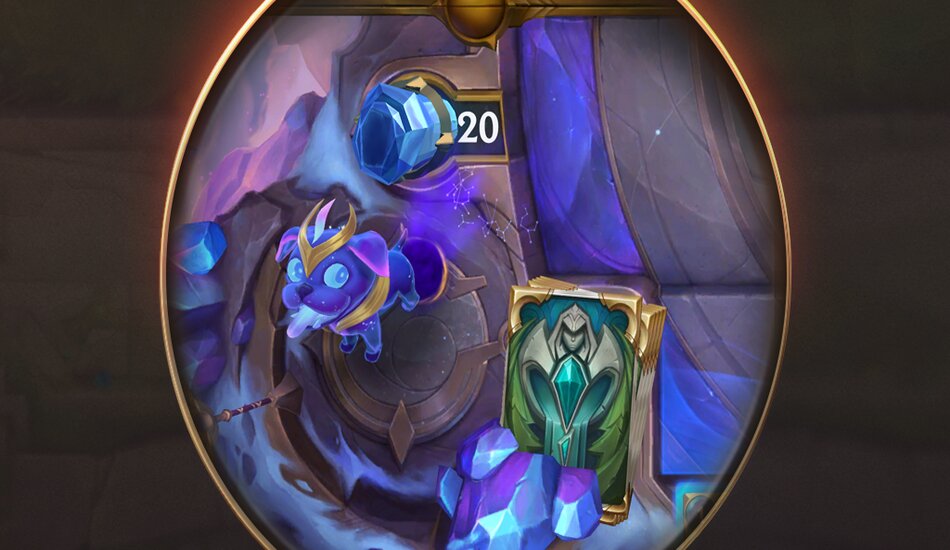 A total of seven champions and 89 new cards go live via the new Call of the Mountain expansion tomorrow, Aug. 26. And with its launch, Riot is also adding new Targon-themed personalizations to the LoR store. Players can purchase Cosmo the guardian, a Celestrial Summit Targon-themed game board, four emotes, and two card backs with the launch of CoM on Aug. 26

Cosmo the celestial dog has a weak spot for star clusters in the shape of a bone. But he’s incredibly loyal—and adorable—with a tongue made for sloppy wet kisses. Cosmo is also The Messenger, a two-drop Celestial in CoM. Players can pick up Cosmo in the guardian section of the LoR store for 590 coins.

A full preconstructed deck using Targon cards, Celestial Radiance, can be purchased in the LoR store for 2,016 coins. The deck features champions Leona and Aurelion Sol, using Daybreak and Invoke keywords. Celestial Radiance is a midrange deck that can assist players in getting used to what the Targon region has to offer.

Four new emotes are arriving with the CoM launch that feature LoR champions Diana, Taric, Lulu, and Nocturne. Diana clearly doesn’t like Leona and her “sun” breathing down her neck, while Lulu doesn’t have a care in the world. Each of the new Tagon emotes are priced at 190 coins.

Grab all of the Targon personalizations or just the cosmetics that tickle your fancy when the CoM set goes live in LoR on Aug. 26.