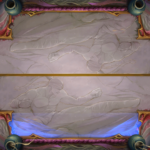 Riot revealed a number of new personalizations coming to Legends of Runeterra within the 1.4 Season of Fortune update.

There aren’t any new cards being added to LoR during the Season of Fortune, but there are several cosmetics that include a new Lee Sin gameboard, Von Yipp guardian, three card backs, three emotes, and a bundle for the first time since the digital card game’s release.

Lee Sin’s Iron Will gameboard highlights many details found in the Ionian region and items from Lee Sin’s training area. The new game board is available in the LoR store for 990 Coin.

Von Yipp is a devious experimenter who has the potential to wreak havoc. The mysterious cat is also apparently easily distracted by a laser pointer. The Von Yipp guardian is priced at 590 Coin.

There are three new card backs arriving within the Season of Fortune 1.4 update. The Blind Monk (Lee Sin), The Tidal Trickster (Fizz), and The Bounty Hunter (Miss Fortune). Each card back is priced at 490 Coin.

Vi, Fizz, and Cithria are also being added to the 21 existing emote’s found within LoR. Emotes are priced at 190 Coin each.

The Lee Sin bundle includes his Iron Will game board, the Blind Monk card back, and an exclusive Lee Sin icon for a total price of 1,332 Coin. This is the first, but hardly the last bundle that will get featured in the LoR store.

Each of the new personalizations will become available within LoR on June 24 with the 1.4 update.