Legends of Runeterra’s next event after Monuments of Power’s release will center around League of Legends’ popular skin line K/DA. The crossover event that will be celebrated in LoR, League, and Teamfight Tactics is starting at the end of the month on Oct. 28.

Within LoR, players that sign in are given a free event pass which containing a set of Epic Spells that prominently feature all of the members of the group: Ahri, Akali, Evelynn, Kai’Sa, and their newest member, Seraphine. Players can upgrade the event pass to obtain even more guardians and cosmetic items, all inspired by the K/DA universe. 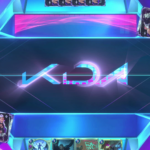 A new game mode named K/DA Star Power—which is presumed to be a Lab Experiment—gives players the chance to try five decks which feature the K/DA unique spells. In addition to these preconstructed decks, based on whichever character-inspired deck the player chooses, an ongoing persistent effect will empower that player’s board to keep the gameplay refreshing.

Outside of the event pass and the new game mode, there is also another cosmetic item that players have the chance to buy in the K/DA board. The board itself is built with special instrumental versions of different iconic K/DA tracks. Players are given the ability to swap the music in the middle of each game to create their own perfect mix.

The K/DA Crossover event starts on LoR Oct. 28. LoR: Monuments of Power officially releases on PC and mobile on Oct. 14.