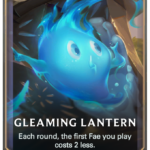 A total of 10 Legends of Runeterra cards kicked off spoiler season today for the upcoming A Curious Journey expansion, containing four units and six spells supporting the Bandle City region and Fae.

Yummi is joining the LoR roster of champions via the new expansion, A Curious Journey, which is scheduled to release on Feb. 16 via Patch 3.2. Supporting Yummi, along with her Fae and Yordle companions, are a total of 10 cards that were revealed today by Riot Games.

Depending on how many Fae cards are released within the upcoming LoR expansion, the follower Gleaming Lantern might be one of the best units revealed today. The Fae is a three-drop unit with 3/3 stats that reduces the cost of the first Fae you play by two each round. The potentially busted Gleaming Lantern is supported by Fae Sprout, a Burst speed spell that manifests a Fae and grants it +1/+1.

The LoR Fae card type will likely be similar to Yordles, promoting go-wide strategies with spells that increase the power levels on the low-costing units. Spirit Portal supports this theme as a Focus spell that grants all allies +1/+1 for four mana and discarding a card from hand. Yordle Portal, on the other hand, manifests and summons a Yordle that costs three or less at Burst speed, costing three mana with an additional cost of discarding a card.

Grandfather Fae and Blastcone Seedling are both low-cost units that have multi-region synergy and have the Fae type. Fae Aid is a three-cost Burst speed spell that creates a Hungry Owlcast in hand and grants Fae allies in hand +1/+1.

Transposition is a unique LoR Bandle City spell that recalls an ally and has the next ally you cast with a cost equal or less of that recalled ally costs zero. And Heroic Refrain is a Burst spell that pumps two allies with +2/+1 stats for that round.

Players can test out all the new Fae and Yordle LoR cards when A Curious Journey launches on Feb. 16.