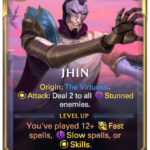 Riot Games has changed up the Legends of Runeterra regions with a group of champions within the Worldwalker expansion that have their own unique region rules.

Jhin was the first LoR champion revealed for the Worldwalker expansion, packing stun synergy and a unique Origin called the Virtuoso. There are three others that have rule-breaking regions as well. All Legends of Runeterra Champions leading up to the Wordwalker expansion either had a single region attached to them or multiple regions (introduced via Beyond the Bandlewood), for a total of 10 regions. The Origin attached to Jhin and the other new champions is essentially a region mechanic, acting as a region without adding more regions to LoR.

When crafting a deck, players can only include up to two regions. Jhin has an Origin called The Virtuoso, a regional mechanic that allows players to add cards with Skills from any region into a deck with Jhin. The Skill cards can be from any region, but they all fall under one region in a deck that has Jhin as a champion via The Virtuoso Origin.

A visual of all the Skill cards that can get added to Jhin’s region at the time of his reveal, created by Lor.GG, shows the variety and limitations behind Jhin’s The Virtuoso regional mechanic.

Jhin may have his own region due to The Virtuoso, but the rest of his card functions like any other LoR champion. The level one version of Jhin deals two damage to all Stunned enemies upon attacking, showcasing a strong synergy with the Stunned mechanic. It costs four mana gems to cast Jhin and his baseline stats are 4/4.

Leveling up Jhin takes a little work, requiring his controller to have played 12 or more Fast spells, Slow spells, or Skills. Upon leveling up, Jhin acquires the keyword Quick Attack and upon attacking, deals four damage to all Stunned enemies while also dealing four damage to the enemy Nexus. Jhin’s baseline stats remain at 4/4.

Jhin also has a unique passive ability. “For every three Fast spells, Slow spells, or Skills you play while you Behold Jhin, play a Lotus Trap,” its description reads.

A Lotus Trap is a Skill, meaning it contributes towards Jhin’s level up. It deals one damage to the enemy Nexus, and if Jhin is on the battlefield, it also stuns the weakest enemy, setting up an attack from Jhin that will deal two damage to that Stunned enemy unit. 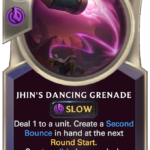 Jhin’s spell has value once the LoR champion has leveled up, but can work pre-level-up under the right circumstances. Also included in Jhin’s spoiler package was the spell Gruesome Theater. It’s a two-cost Ionia spell at Fast speed that will Recall a unit with three or less health. 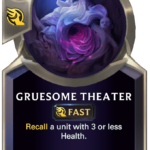 The Gruesome Theater spell ties into Jhin’s cinematic trailer. It has the former Ionian prisoner bowing to The Maker, a three-cost unit with a Skill that will Recall a unit with less power than her upon getting entering the battlefield. This is likely a tip from the LoR devs, showcasing that Jhin can have synergies with other champions outside of ones that capitalize on Stun.