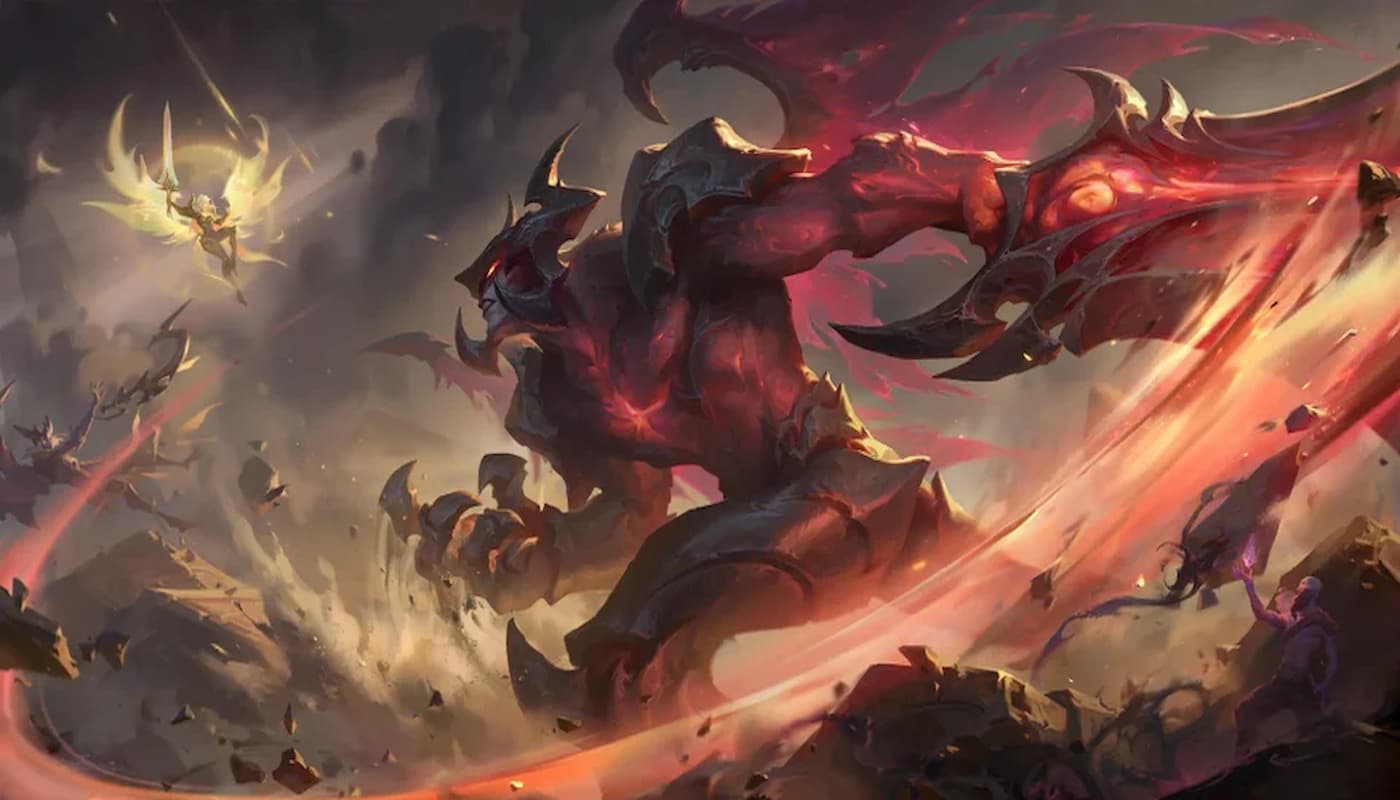 Riot Games has made Aatrox the face of the World Ender expansion in Legends of Runeterra, completing the Darkin Saga.

A total of 68 LoR spoilers for the World Ender expansion were released at the same time today, breaking tradition for Worlds. The cards were spoiled early to avoid leaks, according to game designer Steve Rubin.

All players who are qualified for the Legends of Runeterra World Championship finals have been provided with two scrim accounts that they can share, allowing them to play test the World Ender cards ahead of Worlds. And the champion that might get the most playtesting is Aatrox, with the Pentakill Worlds remix playing in the background.

Aatrox is an LoR champion that has its own regional Origin. The Origin states that players may add any non-champion Darkin to the deck and Aatrox is automatically summoned upon playing three or more Darkin units. 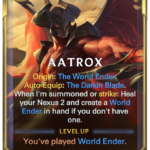 At level one, Aatrox is a six-drop 5/5 that auto-equips The Darkin Blade upon entering the battlefield. The Darkin Equipment gives Aatrox regeneration and +1/+1 stats, making him a 6/6 at level one. He also heals your Nexus by two and creates a World Ender in hand upon getting summoned or Striking.

Using the power of Darkin units and the spell World Ender, Aatrox can level up to a 9/9 champion that reduces the cost of other Darkin allies by five. He still heals your Nexus upon summoning and Strike.

The World Ender is a Slow spell that has its cost reduced by one for each time an Equipped or Darkin ally has struck during that game. There’s also a new keyword called Assimilate that transforms allies Equipped with Darkin Equipment into their Darkin unit forms, according to senior designer Riot Durdle. If a champion has Assimilate, they level up.

A Darkin Lodestone, for example, turns into Horazi through Assimilate while still keeping the Darkin Loadstone. The Assimilate keyword can also level up Kayn and Varus while Aatrox levels up as the spell is played.

Players can watch the World Ender meta unfold during the Legends of Runeterra World Championship and begin building their own decks on Dec. 7.

Update Nov. 29 5pm CT: The definition of Assimilate was added.