During the the second Southeast Asia Seasonal Tournament yesterday, Riot Games revealed the next set of card teasers for Legends of Runeterra’s upcoming expansion, Empires of the Ascended.

The six cards from Noxus are: 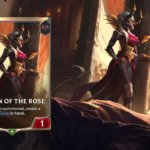 Sigil of Malice is a Common four-mana Fast spell that deals two damage to anything. The mana cost for this spell is reduced to one if you triggered Reputation earlier during the game.

Thorn of the Rose is a Common three-mana 5/1 unit that creates a Guile in your hand when summoned. Guile is the one-mana Slow spell from Foundations that Stuns an enemy of your choice.

Bloody Business is a Common four-mana Fast spell that has an allied unit with five or more power Strike an enemy of your choice.

Whispered Words is a Rare four-mana Burst spell that draws you two cards. If you activated your Reputation requirements, the mana cost of Whispered Words becomes two.

Black Rose Spy is an Epic two-mana 3/2 unit with a summon ability that triggers if you successfully attained Reputation this round. Upon being summoned, the Spy transforms into an exact copy of the strongest allied unit that struck this round, whether it be a follower or a champion.

Mimic is a Rare three-mana spell that has a unique ability that has you select a Spell that’s either in your hand or on the stack, and then you gain a Fleeting copy of that card in your hand. The cost of Mimic is reduced to one if Reputation was successfully triggered.

Sigil of Malice can draw immediate comparisons to Mystic Shot from Piltover and Zaun. While Mystic Shot is immediately better due to its low original mana cost, if you can achieve Reputation, Sigil of Malice will become the better card due to the three-mana discount.

Out of all of the cards revealed in the past few days, Bloody Business can help you achieve Reputation while retaining board control at a reliable speed. Since you spend only four mana to strike an enemy, you can usually remove most threats during the earlier stages of the game. Due to its cheaper cost and faster spell speed, you can use it in response to an opponent’s powerful card to gain an upper hand.

While your opponent can interact with your unit, either by reducing its power to be below five or destroying it outright, Bloody Business serves as even more potent removal for Noxus.

Whispered Words is the first unconditional non-tutor card draw for the region that does not have a discard cost associated with it. In similar fashion to Salvage, Whispered Words can be cast for four mana to draw two cards from your deck.

The main difference from the two that makes the new card stand out is that Whispered Words can reduce its cost by two if you achieved Reputation, making it a mana-efficient card draw.

Black Rose Spy has a peculiar transformation ability that can transform into one of your allies even after it leaves the board. Since the Spy tracks each strike individually and transforms into your strongest battling unit, you can potentially get duplicates of your strong champions.

While morphing into cards with strong summon effects sounds enticing, transforming into cards with abilities that trigger when summoned will not activate them. This means if Black Rose Spy becomes an Avarosan Hearthguard or Trifarian Assessor, you will not get the stat boost for your deck or card draw respectively.

In this batch of revealed cards, Mimic has the most interesting and skill-testing applications to find success with it. Since Mimic can copy spells on the stack, you can copy either enemy Slow or Fast spells and turn their power against them, like Deny or Nopeify. In addition to this, Mimic can be used with your Burst spells you have in your hand, or duplicate potential damage cards for surprise lethal opportunities against your opponent.