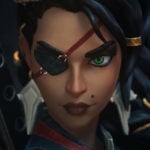 League of Legends is halfway through its champion roadmap. Riot Games shared its plans of introducing six new champions throughout 2020 with the fans. Sett, Lillia, and Yone have all been colorful additions to the game in terms of lore and spice up the metagame.

Though it felt like Riot deserved some time off after releasing two back-to-back champions in a short time frame in July and August, leaks suggested that the developer was planning to come back in style. A Brazilian content creator, Streamie, leaked the core design of Samira shortly after Yone’s release, and the hype levels for the new ADC champion went through the roof.

The Noxian markswoman looks like a dangerous nomad and uses a blade in combat in addition to her guns. Her spell-kit takes advantage of both her dagger and gun. Her unique ultimate can only be used when she reaches a Style rating of S, which she can increase by using her attacks.

Samira will be the third ADC champion who’ll have joined Summoner’s Rift in the last nine months, but there’s also a chance that League enthusiasts can find her a different place in the meta since Samira looks like a rewarding character when it comes to playing aggressively.

When does Samira release in League?

Though Riot released Samira’s official teaser on Aug. 30, the developer didn’t comment on when the champion would hit the live servers. Leaks and guesstimates suggest that she could arrive as early as Sept. 2 with Patch 10.18, but considering she was just introduced to PBE with Patch 10.19, she’s more likely to become available on Sept. 16.

Riot hasn’t confirmed both dates, however, and the developer has a history of delaying a champion’s release by a patch or two if it runs into unexpected bugs.

Patch 10.19 will also introduce a new skin line, PsyOps, alongside many longly anticipated royalty skins. Prestige True Damage Yasuo and Championship LeBlanc are expected to release with the patch as well, topping off the patch’s cosmetics.

Considering there is still time before the potential release dates, Riot can add even more skins or changes to compliment the new champion’s release. This article will be updated as more information becomes available regarding Samira’s release date.