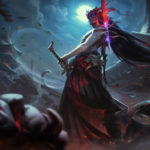 League of Legends started 2020 with the introduction of Sett, the first champion on a list of new characters that will join the game. Following his release, Riot confirmed in a Champion Roadmap that it was getting ready to release two more champions in a “big” summer event named Spirit Blossom.

If Yone is confirmed, the second champion that will accompany him on the Rift is Lillia. Despite not being mentioned in the lore, Lillia has stolen the spotlight with a number of leaks and an official teaser. Yone was finally leaked alongside other skins in the Spirit Blossom line.

Here’s everything we know about Yone so far. 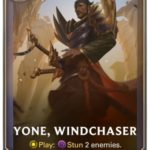 Yasuo’s biography introduced Yone to the Runeterra universe. Yone and Yasuo were half-brothers living in a small village. Yone, as the older brother, was the first to join the swordsmanship school. Inspired by his brother, Yasuo followed suit. A talented but arrogant Yasuo caught the attention of Elder Souma, the last master of the wind technique.

Yone gifted his brother with a maple seed, a symbol of humility, and begged him to change his ways. Yasuo left his rebel nature behind and started to learn the wind technique.

When the Noxians invaded, the village tasked Yasuo with the protection of Elder Souma. In a moment of stubbornness, Yasuo abandoned his post. When he returned, he found himself being accused of the murder of Elder Souma. Yasuo ran away and the members of the village swore to chase him. One of his hunters was Yone, his own brother.

Yone and Yasuo met again, but it wasn’t a happy reunion. The brothers fought and Yone was no match for Yasuo. He cut Yone down almost immediately. Yasuo begged Yone for forgiveness, but the absolution never came.

Yasuo continued to run and met characters like Taliyah along the way. Yasuo gifted Taliyah the same maple seed his brother gave him as a token of their partnership.

It was later revealed that Riven killed Elder Souma. Yasuo was found innocent of the crime, but he still felt guilty for the death of Elder Souma and Yone.

In the lore, Yasuo believes that his brother is dead. Whether Yone is, in fact, dead is another question altogether, however. This wouldn’t be the first time Riot brought a character back to life. Senna lived inside of Thresh’s lamp for years, but now she’s alive and thriving on Summoner’s Rift.

Voice lines between Yone and Spirit Blossom Thresh indicate that Yone will potentially rise from the dead.

“Worry not Yone,” says the first line. “Your little brother is safe with me, too.”

The second line tries to get under Yone’s skin by mentioning how he could rest in peace while being overshadowed by Yasuo.

Riot officially released all of Yone’s abilities on July 24, showing off champion’s kit prior to his release on live servers.

“Yone thrusts forward, dealing physical damage to opponents. On hit, he gains a stack of Gathering Storm. At two stacks, Yone can dash forward with a wave that makes enemies airborne.”

“Yone cleaves forward in a massive arc, dealing a portion of the target’s maximum health. After successfully hitting an enemy, Yone also gains a temporary shield. The shield’s power increases per champion struck.”

“Yone can enter his Spirit Form, gaining movement speed and leaving his body behind. When Yone’s Spirit Form expires, he’ll snap back into his body and deal a percentage of all the damage he dealt while in Spirit Form.”

“Yone strikes all enemies in his path, blinking behind the last enemy hit and knocking everyone airborne towards him.”

When does Yone release on the live servers?

Though Lillia was released with the patch 10.15, which hit the live servers on July 22, Yone skipped the first patch of the Spirit Blossom event. This isn’t anything unusual since Riot occasionally delays champion releases by a couple of weeks to iron out the possible bugs that may arise with a new event.

The recent Ability Rundown of Yone by Riot stated that the champion would become available to play with patch 10.16 that is scheduled for an August 5 release.