With veteran and former World Champion Bae “Bengi” Seong-ung entering the latter stages of his career, Korean Powerhouse SK Telecom T1 began the search for a new jungler. Preferably one who could play alongside Bengi while he built up synergy with the rest of the team. In a fashion that is accustomed to the organization, SK Telecom began to scour the solo-queue ladder in search of up-and-coming talent, the same tactic used to find SKT’s midlane star Faker and toplaner MaRin. In result of the search, SK Telecom signed 19 year old Im “Tom” Jae-Hyeon. Tom shot up through the Solo-queue ladder between Season 4 and Season 5, climbing from mid Diamond all the way up to his peak at rank 37 in Challenger. His climb is much in thanks to his most played champion, Udyr, on which he boasts a 64% win rate over nearly 130 games. While Tom has shown he can perform on the ranked ladder, the verdict is still out on whether or not he has what it takes to become a top-tier professional jungler.

On Friday, March 20th, the lights in the ogn booth flicked on to reveal SK Telecom’s lineup, who would face off against Incredible Miracle in the second match of the day. However, a familiar face was missing from the group of players on the stage. For the first time in two years, longtime jungler Bengi was not started. In replace of Bengi, rookie jungler Tom made his professional debut.

In the second round of the pick ban phase, SK Telecom locked in Tom’s Udyr, along with Hecarim for MaRin. As the game got underway, Tom immediately began to use Udyr’s strong objective control by taking the first dragon of the game in under 5 minutes. By 10 minutes he had assisted MaRin in killing Lil4c top lane. Tom continued to play aggressively, and secured a 22 minute baron with the help of his team, and a third dragon by 25 minutes. SKT closed out Tom’s debut in 33 minutes, up 20 thousand gold, twelve kills, and 9 towers. Tom ended the game 2/0/6.

The second set versus IM was more of the same from Tom, and the whole SK Telecom team. Incredible Miracle banned Udyr, so Tom fell back onto his third most played solo-queue champion, Jarvan. Tom secured first blood in under a minute when Lil4c was caught out as a result of IM attempting to invade both sides of SKT’s jungle. Under two minutes later, Tom showed more of his aggressive playstyle by taking down Tusin’s support Irelia in a level two gank. While SKT began to fall behind IM in the midgame, a huge triple kill near the dragon pit from Faker would put SKT back into driver’s seat. On the back of Faker’s Viktor, SK Telecom would close out the match in just over 38 minutes. Despite not having the toughest opponent, Tom’s debut match looked very promising. The rookie jungler played fantastically outside of a few strategical misplays, and finished the series with a KDA of over 6. 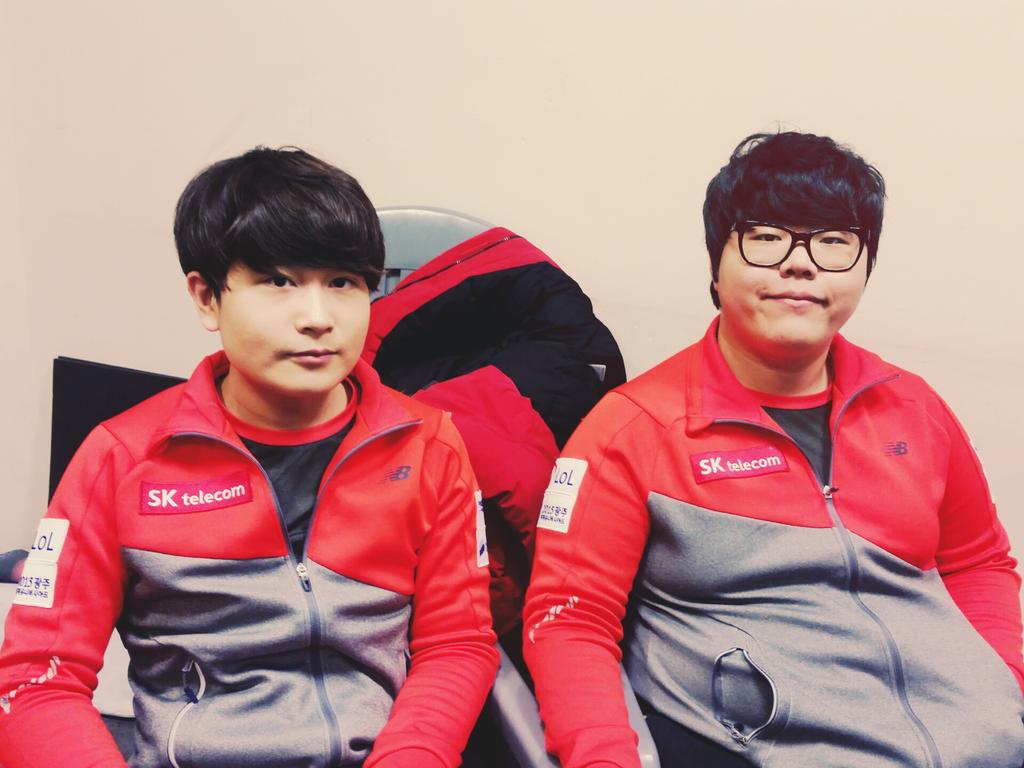 While SKT was experimenting with Tom in jungle, the team still had a playoff race to contend in. Placing 2nd in the standings just below GE Tigers, and narrowly above the 3rd place CJ Entus, SK Telecom could not afford to lose any matches. Entering week 11 of the LCK split, SKT played against the 4th ranked Jin Air Green Wings. Jin Air had shown the skill necessary to beat the top ranking teams, and despite being on a considerable downswing, had a shot to possibly steal 3rd place away from CJ Entus. Facing a team with the potential to upset anyone in the league, SKT put trust into Bengi to guide them through the series. Bengi fulfilled his role, and SKT easily 2-0’d Jin Air.

In the second to last match of the split SK Telecom were scheduled to verse Samsung Galaxy. After an exodus of Korean pros to China, Samsung Galaxy found their roster completely gutted of all former talent. Forced with the task of building a new team, SSG struggled in the basement of the league. Samsung floundered throughout the split, only picking up two wins against other bottom-ranked teams. The match against SK Telecom was predicted to be a blow-out, so in response, SKT coach kkOma subbed Tom back in for Bengi.

A large question often brought up when young talent makes it’s way into the professional  scene is if the solo-queue accustomed rookies can adapt to the professional playstyle and champion pools. Tom had shown he had no issues adapting to the playstyle, but his champion pool was still in question.  When Tom had played his first match with SKT, the league still used patch 5.4, where solo-queue-esq aggressive early game junglers suited the jungle quite well. Now, in his second appearance, the addition of Cinderhulk has shifted the jungle meta away from hyper aggressive bruisers, to tanky utility junglers. ‘

Again, Tom proved to any doubters that at the very least he was mechanically sufficient on these junglers. In game one Tom locked in Sejuani, against Eve’s Lee Sin. Tom took a step back from his hyper-aggressive playstyle and spent more time in his own, and his enemy’s jungle farming. He secured the first dragon of the game at 7 minutes with the help of SKT’s bot lane, Bang and Wolf. Despite playing passively, Tom ganked SSG’ CuVee at nine minutes for yet another first blood. SKT went on to dismantle Samsung in 29 minutes, beating SSG with a 20k gold lead, 13-1 in kills, and four dragons to none. Tom ended the game 3/0/5 with 96 cs. The second set between the two teams ended in the same result; a crushing victory by SKT. Tom, again on Sejuani ended the game 1/2/8, after landing a huge 3 man Glacial Prison to completely turn around a mid game fight that looked to be going poorly for SKT. SK Telecom missed a perfect game by 3 kills, stomping Samsung in the fastest game of the split, just over 24 minutes.

Pride Match of the Titans: SKT v.s GET

With both GE Tiger’s and SK Telecom’s spots locked in for end of the split (first and second place), a match that would normally be the cause for an ample amount of hype had no meaningful risk for either team. A pride match is the best way to describe the showdown. Both teams were favorites to reach the finals, and the winner of this regular season match would be deemed to have the upper hand heading into the playoffs. SK Telecom did not miss the chance to give Tom the experience to play against one of the best teams in Korea, or even the world.

In the first set Tom moved away from Sejuani, who he had played twice against SSG, and picked up Nunu instead. SKT ran a Juggermaw-type team comp, except with Sivir in the place of Kog’Maw. The rookie jungler attempted few to no ganks throughout the whole first set, however, he still had a large impact on the set. Constantly pressuring dragon in the early minutes of the game forced GET’s Lee to stay on the bottom half of the map, allowing MaRin to survive as Rumble against Smeb’s Gnar. Tom kept up great vision control around the dragon, and lived inside Lee’s jungle creating havoc wherever he went. At times Tom’s rookie status shown through, as he went for exceedingly risky invades with no backup from other members of SKT. On the back of a phenomenal performance from Bang’s Sivir SKT took the first set with ease.

The second set was much closer than the first. After the GE Tigers picked Nunu away in the first round of pick ban, Tom defaulted back to Sejuani. He made great use of Glacial Prison, landing one after another. First to save Faker and secure first blood in the midlane. Next to clean up the jungler and AD carry of GET in front of the dragon pit. He hits yet another to freeze Lee and steal the second dragon of the game, and to set up a 4-0 fight in favor of his team.

The second game was by no means a clean one from either team. A risky baron call nearing 30 minutes from SKT went horribly wrong, handing GET the baron, and 3 kills along with it, nearly squandering a 6k gold lead. Faker looked far from comfortable on Cassiopeia, getting caught out multiple times, and missing a couple of ultimates. Despite some sloppy play, SKT closed out the match in 46 minutes.

The First Test and the First Verdict

By now the brand new SK Telecom jungler had began to make an impact on the league. He boasted a 6-0 record, and a KDA of 8.13. Even if four of his wins came from the bottom two teams, he had shown he could dance with the best in his match against GE Tigers. If there was to be a chink in his armor, it would be his over-aggressiveness, and tendency to get caught out. An issue common in many young players, and should be corrected as he matures. However, in the series against CJ Entus, Tom had not transformed into a fully matured jungler, and still being the inexperienced rookie he is, underperformed in both sets he played in.

During the first set Tom played his first professional game of Gragas, to sub-par results. He did secure first blood after catching Madlife roaming in the river, finding his first and last kill of the whole series. He was counterganked bot lane, leading into a 2 for 1 and a dragon in favor of CJE, and he committed multiple mechanical blunders, hurting the fumbling SK Telecom’s chances of winning even more. SKT found themselves down 4k gold at 38 minutes into the game, and only 5 minutes later, down 0-1 in the series.

The second game did not showcase any better results from Tom or SK Telecom. Tom picked Nunu away from Ambition, who then selected Gragas to face him. Tom tried to repeat the performance he had against the GE Tigers, however it failed considerably hard. While he captured the first dragon extremely early into the match, (under 5 minutes in) the move handed over first blood to Ambition. Throughout the game Tom fell just a few steps behind Ambition, leaving him desperately invading the enemy jungle, and making risky plays in order to find gold anyway he could. After continuously being picked off and outfought, SKT again found themselves down 15 kills, 10 towers, and most importantly, down 2 games to none in a best of five series.

In his first ever best of five, Tom’s inner nerves weaknesses got the best of him. He finished the only two games he would play in the series with a KDA 1/9/2. SKT head coach kkOma had seen enough, and called for the battle tested Bengi. Bengi would work together with Faker, Bang and the rest of SKT T1 to stage a 4 game comeback and beat CJ Entus in a long, suspenseful best of five, all while Tom watched it happen from the back room of the studio.  For the young Tom, despite having a disappointing playoff series, he proved to all the competitive scene that, when he is on his game, he has what it takes to become the jungler SK Telecom T1 needs in order to regain their spot as a world class powerhouse. Tom is off and running to become a dominant jungler in the toughest region on the globe, and it’s only a matter of time before he reaches the finish line.

Images are property of lolesports.com and SK Telecom t1 respectively.

SpyDoc is an amateur writer with absolutely no experience, and just wrote his first ever article. You can follow him on Twitter: @SpyDocked