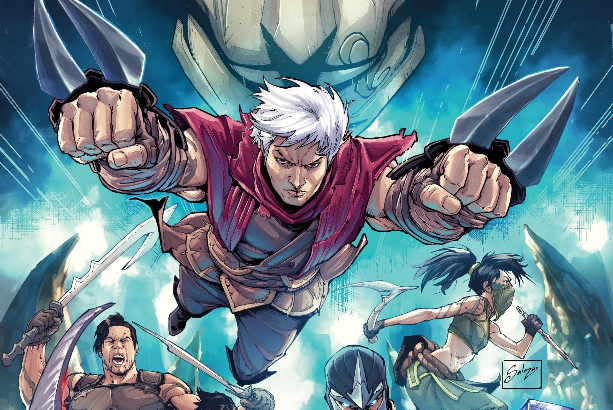 Riot Games first teased the Zed comics series earlier this month, previewing a sneak peek of its collaboration with Marvel on the Master of Shadows. And now, the first of six issues is finally here.

The comic follows Zed, formerly known as Govos, as he tries to protect his homeland of Ionia. Issue One involves a little bit of everything, including death, reunions, flashbacks, and unhinged murderers.

Before we delve deeper into Issue One, written by Ashe: Warmother’s Odin Austin Shafer, we definitely encourage you to read the full comic on Riot’s Universe page.

The story begins with Zed admiring a statue of his former Master Kusho, who he killed despite being raised and trained by the admirable leader of the Kinkou Order. Zed then duels Kusho’s nephew, Althon, while Kayn and the rest of the band of assassins watch from the sidelines. The Master of Shadows makes worm meat of Althon, claiming he was “never [his] master’s equal.”

Zed’s difficult-to-define relationship with Master Kusho is further revealed through a flashback. After Jhin attacked Kotha Village, Zed had to nurse the wounded back to health while letting others whose injuries were fatal die. Kusho is so impressed with Govos that he chooses the young orphan to succeed him as the Eye of the Twilight when his time to step down comes, instead of his own son, Shen.

When Akali hears of the Althon’s death, she tells Shen who seems to want to avoid a confrontation that centers around revenge and passion. Akali refuses to listen, and asks Shen to join her in killing Zed once and for all.

The issue ends with Jhin luring Zed and the rest of the band of thieves to Kotha once again, readying his encore performance.

“Zed” seems to bring up issues of classism several times, as the word “peasant” is brought up repeatedly in derogatory fashion. Althon calls Zed a “peasant” during their duel in the first scene when the Master of Shadows refuses to be called “Govos.” That was his peasant name prior to being elevated to Usan by Master Kusho. And when Zed is being lured to meet Jhin, he claims that he doesn’t “duel with peasants.” Zed’s rise from peasant to leader is an interesting theme that will likely be explored in upcoming issues.

The second issue will be released on Dec. 18 and is titled “Reunion” which may hint at Shen and Zed coming back together to best the Virtuoso.