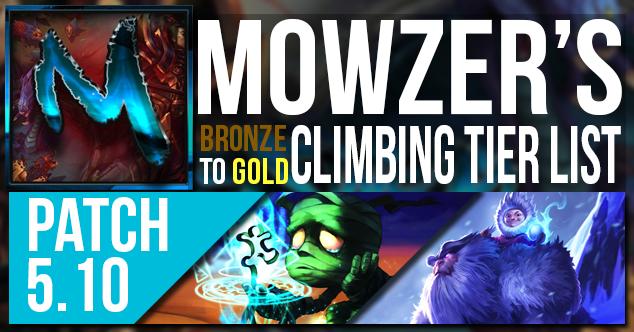 Hey everyone. Mowzer here. Here is my bronze to gold jungle “climbing tier list” for patch 5.10. This list is aimed at helping those at lower MMR to climb the ranks. This list is just my opinion and is not to be taken as fact.

There were no jungle notes this patch due to there only being a few jungle changes.

Reasoning: Both champions are easy to pick up and use. They are great in team fights and take advantage of cinderhulk. Their play-styles are very different.

Amumu (Champion Card – Runes & Masteries Card) vs. Nunu (Champion Card – Runes & Masteries Card): Amumu has % health shred, dishes out more damage, has more CC, and is a better initiator. Nunu is a better counter-jungler, objective securer, and has better utility. Those that prefer carrying will feel more comfortable with Amumu, while those more focused on getting the team the upper hand will enjoy Nunu. Amumu has more personal carry potential and Nunu uses his kit to snowball his team.

Reasoning: All of these champions are strong and have something different to offer the team.

Tank – Gragas, he fits well into the meta and has a strong early-mid game. He has a lot of early game damage and scales decently into the mid and late game.

Carry – Rengar, he is a snowball carry that can build various ways and fill different roles. His hyper-carry, glass cannon build does well when ahead to delete the opposition. His comeback potential isn’t the greatest though.

Reasoning: This is where the majority of the junglers end up. They are all good, but they lack, in my opinion, the power to complete with the upper tiers.

AP Tank – Cho’gath (Champion Card – Runes & Masteries Card) – He clears easily and has a great damage to tank ratio. He can easily secure dragon and baron and lay down some CC. Kiting is his weakness.

AD Tank – Olaf (Champion Card – Runes & Masteries Card) – He can easily clear the jungle and has solid ganks, provided that you can land an axe. His ult + righteous combo makes him go crazy quick and he has a good build patch in the current meta. He has issues getting kited though.

Carry – Kha’zix – He has been up and down in the last few patches, but he still is really strong. He lacks solid CC and needs kills/money to get moving. He is a monster once he goes his wings flapping though. He does not have the greatest comeback potential either.

Reasoning: These champions can jungle, but they typically do better laning than jungling. They either require a lot of gold or skill with them to pull off.

Reasoning: This is where everyone else goes. Every champion in the game can jungle, literally.

My Suggested Pick(s): I recommend none of the champions from here in ranked. My fun pick is Ashe though, especially since her remake. She has global stun gank potential and can perma slow champions. She lacks an escape and is easily counter jungled though.

Recommended Jungler for newer Junglers: Nunu or Warwick. Both champions can easily jungle and don’t require a lot of skill to pull off. Nunu is a top pick, in my opinion, at the moment. Warwick is still really strong too. He does well against the tanky meta and can become almost unkillable in certain situations. I have ranked up a new smurf account to platinum 2 on KR with almost only Warwick.

My Personal pick(s) – Olaf and Cho’gath

There are many junglers to choose from this patch. Don’t be tricked into thinking that there are only a couple of “viable” ones. Solo Q is not LCS, LCK, LPL, etc. There are no guides or streams that can turn you from a bronze/silver/gold tier player into a challenger tier player overnight. Climbing the ranks takes time, skill, dedication, and a bit of luck. Admit your mistakes and improve from them and you will go far. None of us are perfect, why act as such?

TL;DR – Sejuani moved down a peg after the nerf to her W. Gragas’s nerf wasn’t very game changing. There are a lot of good-viable picks currently. Pick something you are good with and enjoy.