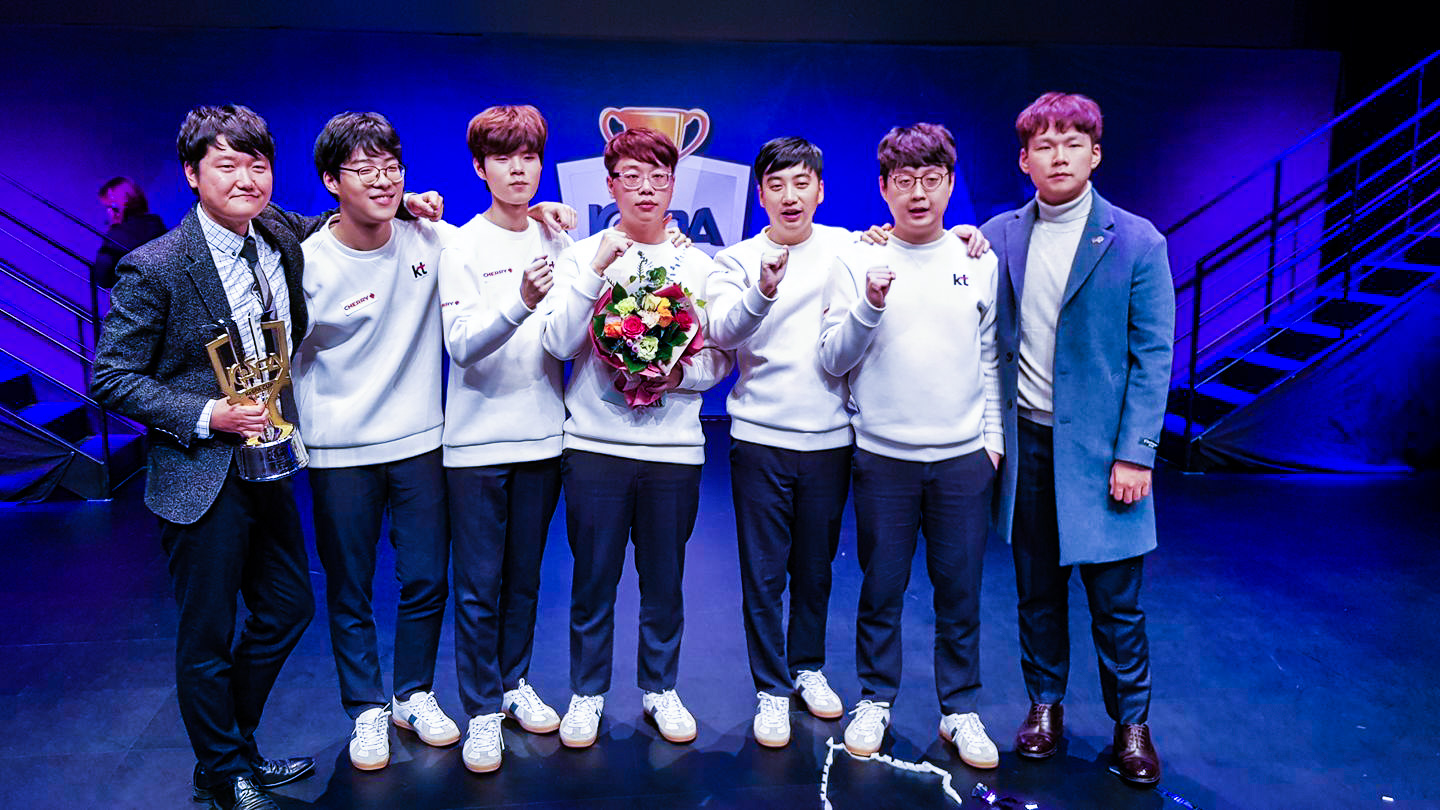 KT Rolster finally did it. Season seven was an unmitigated disaster for a team full of stars. But KT started season eight with a bang by defeating Longzhu Gaming in the final of the KeSPA Cup.

When KT rebuilt its roster after season six, many pundits and fans immediately dubbed it a “super team.” The roster consisted of former world champ Cho “Mata” Se-hyeong, top laner Song “Smeb” Kyung-ho—who many considered the best player in League that year—and ADC Kim “Deft” Hyuk-kyu seemed destined for greatness. But the team struggled throughout season seven, with poor map awareness and baffling macro decisions. It wasn’t really a surprise when they were reverse-swept by primary rivals SK Telecom T1 in the LCK playoffs.

It was somewhat surprising then when KT returned the entirety of its roster for season eight. That decision paid off on Saturday as the team showed improved synergy by defeating Longzhu. KT already knew how to beat the LCK champs—they did exactly that at the end of the last split by focusing on Longzhu top laner Kim “Khan” Dong-ha and keeping him down.

Khan made it harder this time around. He picked Ornn—a totally broken champion right now—and dominated from the first minion wave. He shoved Smeb’s Fiora around and was in firm control even before receiving a gank from mid and jungle to snowball his lead.

Buff after buff succeeded in turning Ornn into a stupidly OP champion, and Longzhu were forced to ban him on red side in the second game. KT decided to pick Jayce for Smeb. Jayce is extremely powerful, but also ultra risky. Lose lane with him, and the game is over. Thankfully for KT, Smeb didn’t lose. Longzhu fought hard, but KT came out on top.

KT’s longstanding problem of poor objective control reared its head in the third game, allowing Longzhu to come back from a deficit. They snowballed a lead more effectively in game four, with Mata making big plays on his trademark Thresh. That set up a final game five for the championship.

The teams traded even until a messy play in the bot side jungle sent Longzhu ahead. For the first time since game one, KT had to play from behind—something they aren’t very good at. They did a much better job in this game, correctly picking sides of the map and taking free objectives. A Baron steal by Go “Score” Dong-bin completed the comeback.

Longzhu defended well though and KT required another objective steal—Elder Dragon this time—from Score to stay even. The game surged past 40 minutes and seemed headed for 50 before a massive engage by KT ended it. Smeb’s Jarvan IV ult combined perfectly with Deft’s Miss Fortune ult in melting Longzhu’s health bars. It was one of the most impressive wins we’ve seen from KT all year.

In the long run, the KeSPA Cup doesn’t mean that much. It’s not considered a major championship by any stretch. But for a team that has struggled with expectations as much as KT, getting a win like this on the board is important. And they did it in five games, through some adversity, which makes the victory even more meaningful.