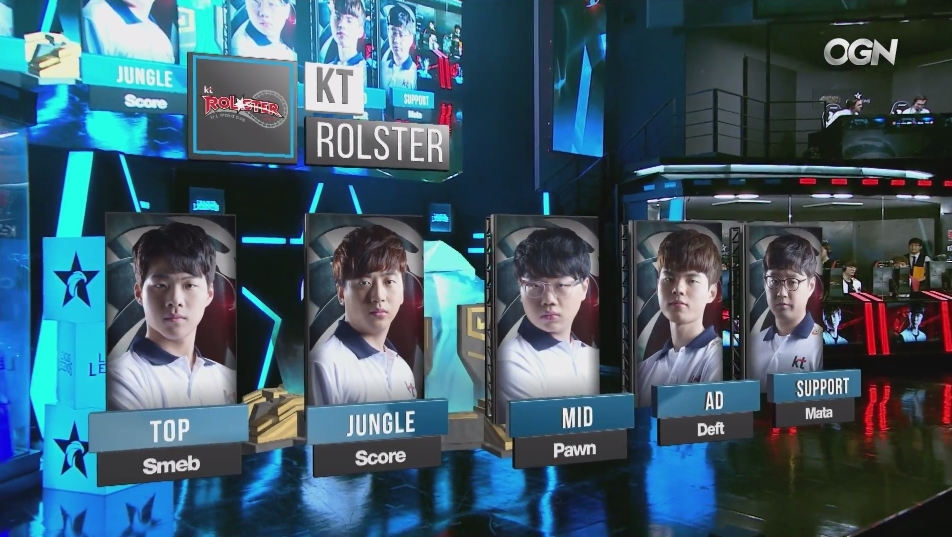 As the OGN camera panned over the KT Rolster booth for the last time in 2017, the players remained stoic—all except for jungler Go “Score” Dong-bin, who held his head down in disappointment. This was the second year in a row Score had been denied a spot at Worlds by Samsung Galaxy in the finals of the Regional Qualifier.

For the past two years, Score had been considered the best jungler in the world, but was denied a chance to showcase his talents on League of Legends’ biggest stage.

And then Score and KT’s 2017 season abruptly ended in complete failure.

There’s no other way to look at it. This iteration of KT was created to accomplish three goals: Become the LCK champions, win Worlds, and dethrone SK Telecom T1.

KT failed to accomplish any of these. KT lost to SKT in both of the playoff series they played during the Spring and Summer Splits. And despite multiple chances to qualify during the latter half of the Summer Split, KT failed to make this year’s World Championship.

Knocked out of the Summer Split Playoffs by SKT in the semifinals, KT’s final chance at Worlds qualification was to beat Samsung Galaxy in the Regional Qualifiers. But KT couldn’t even take a game against the team they crushed handily over the year, as KT were swept by Samsung, ending their season.

Named the Korean “superteam” quickly after the roster was announced at the end of 2016, this iteration of KT had seemingly unreachable goals placed on their shoulders. A star-studded lineup comprised of all-time greats like Kim “Deft” Hyuk-kyu and Cho “Mata” Se-hyeong, with former ROX Tigers top laner Song “Smeb” Kyung-ho, who many considered to be the world’s best player in 2017, KT had built an iron fortress of talent.

The only question was mid laner Heo “PawN” Won-seok, who fluctuated in and out of play throughout 2016. While some Korean pundits saw potential red flags pop up around PawN’s play, most fans were blinded by his illustrious accomplishments from 2014 to 2015, when he won Worlds with Samsung White. He was also the first player to hand Lee “Faker” Sang-hyeok an international tournament loss during the 2015 Mid-Season International.

Even with doubt surrounding PawN, the entire community seemed sold on this superteam. By the time the 2017 LCK Spring Split commenced, everybody was sipping the KT Kool-Aid.

Shotcallers are a hot commodity in League of Legends. In an esport that emphasizes coordination and synergy between players, having a leader or shotcaller to rally the team together becomes an invaluable tool. Without at least one leading voice, teams become disjointed. No matter how skilled a set of players are individually, if there’s nobody dictating what to do next, the team will roam the map aimlessly, emulating a solo queue-like playstyle.

Cloud9’s 2015 Summer Split roster ran into this exact problem. Despite the noticeable increase of mechanical skill and laning prowess Nicolaj Jensen brought to the mid lane, Cloud9 lost their only shotcaller in Hai Du Lam, and thus had no idea how to play the map past the laning phase.

But too much of a good thing can lead to problems. Prior to joining KT, Song “Smeb” Kyung-ho, Kim “Deft” Hyuk-kyu, and Cho “Mata” Se-hyeong all played on teams built around them specifically. They had the freedom to dictate how their teams played.

Early in the LCK Spring Split, it was clear there was a clash of playstyles on KT. While KT’s laning phase was great, and most likely the best of any team in the league, trouble started to brew once the mid game hit. It seemed as if multiple players called for different plays at the same time, resulting in disjointed macro play.

This wasn’t a huge problem against lower seeded teams because of the vast difference in mechanical skill. But KT’s shotcalling issues became a glaring problem once they faced teams at the top of the standings. Although they almost always found early leads, KT usually made some macro mistake around the 35th or 40th minute. For teams like SKT and Samsung, this mistake was more than enough of an opening to make a comeback and win.

Although their team cohesion had greatly improved by the Summer Split, KT’s shotcalling faltered when it mattered most: Worlds qualification. In their playoff and Regional Qualifier losses to SKT and Samsung, KT were unable to win without a massive gold lead. If they fell behind early, or entered the late game even in gold with their opponent, KT almost certainly lost.

The most worrisome aspect of KT’s failure to reach Worlds was the manner in which they lost to SKT and Samsung. KT looked as if the team had regressed back into their early Spring Split form, making many of the same mistakes they were thought to have overcame. But for this regression to occur, a condition needed to be met—KT had to lose a game.

Against SKT in the Summer Split semifinals, KT started the series incredibly, up two games at match point against the team they’d yet to best this year. Once SKT won game three though, KT’s play worsened dramatically. While macro play was never one of their main strengths, KT’s map movement and objective control was non-existent in the following three games. KT repeatedly got caught out, and SKT had full vision control of the entire map—a confusing sight for those who tuned into games one and two of the semifinal.

Similarly, in the Regional Qualifier, KT’s play regressed once they fell behind after a game one loss to Samsung. KT’s mid to late game decision making looked almost identical to the Spring Split, as they couldn’t close out a game despite an overwhelming lead. For KT to throw a 7,000 gold lead with three open inhibitors, especially against a team they repeatedly bested throughout 2017, something had seriously gone wrong.

Both of these losses point to a lack of mental fortitude. For some fans, that conclusion probably sounds crazy. This iteration of KT was composed of battle-tested veterans, who’ve experienced both success and defeat. But in their three best-of-five losses of 2017, KT never came back once they lost a game. Instead, they crumbled, falling back to old bad habits fans thought they’d overcame. The superteam disappeared.

What’s next for the superteam?

While caster Kim “Dangun” Ui-joong readied himself to interview Samsung after their Regional Qualifier win, an OGN camera, for a brief moment, panned into the almost vacant KT booth. Standing alone was Deft, packing up his peripherals in the now darkened box he had just played his final best-of-five of season seven. As Deft finally exited the stage at the behest of staff, it was clear a feeling of uncertainty had begun to surround KT.

Unable to make this season’s World Championship, KT’s lineup may see a shakeup over the upcoming offseason. PawN, who was KT’s underperformer this season, seems to be the most obvious candidate. In the heart of South Korea, a country known to mass-produce talent, it’s hard to imagine KT not at least trying to find a young rising solo queue mid laner to be a substitute, similar to Spring Split Longzhu with Song “Fly” Yong-jun and Gwak “Bdd” Bo-seong.

Whether we see a roster move, the addition of a substitute lineup, or a change in the long-standing coaching staff, come 2018, KT will look much different than the current iteration. If not, expect another disappointing year.