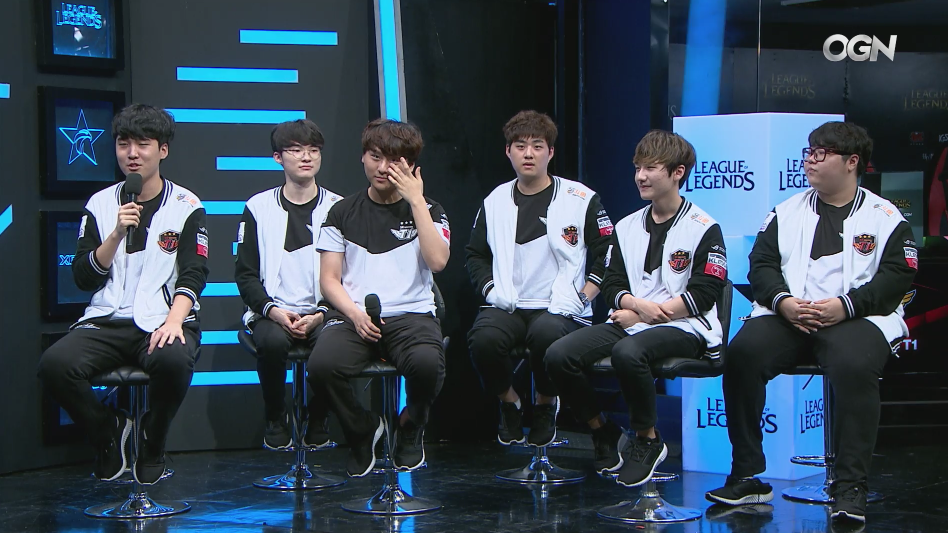 Not only was today’s highly-anticipated bout the final LCK Telecom War of 2017, but it was also SKT’s shot at revenge against KT Rolster. After losing to KT almost exactly one year ago during the 2016 LCK Summer Split semifinal in a reverse sweep, SKT weren’t going to taste defeat twice.

But after games one and two, SKT’s dreams of an LCK final seemed hazy. KT rushed out to two quick game victories. Great macro play combined with KT support Cho “Mata” Se-hyeong’s insane play on Thresh netted giant leads for KT. SKT, who drafted two late-game scaling compositions, had no way of stopping KT from snowballing once they got ahead.

But unlike some of their games in the past, KT didn’t throw these leads. Decent late-game shotcalling by KT led to relatively clean endings for games one and two, as SKT had almost no openings to find kills.

SKT was one loss away from playoff elimination—but then they subbed in jungler Kang “Blank” Sun-gu. Blank’s appearance in addition to Lee “Faker” Sang-hyeok seemingly having a realization that Corki exists allowed SKT to mount their comeback.

SKT flipped the script of this series, as they were now earning the early leads. Faker, now on Corki for the first time this series, returned to his dominating form and became untouchable on the map. If SKT ever made a mistake and gave KT an opening, they quickly fixed this error through a teamfight win moments later.

SKT won the next three games with ease to complete the reverse sweep of KT. Now with their revenge enacted, and a spot at the 2017 World Championship guaranteed due to championship points, SKT set their sights on Longzhu Gaming.

SKT will have one week to prepare before returning to the Rift on Aug. 26, when they face Longzhu in the LCK Summer Split finals.