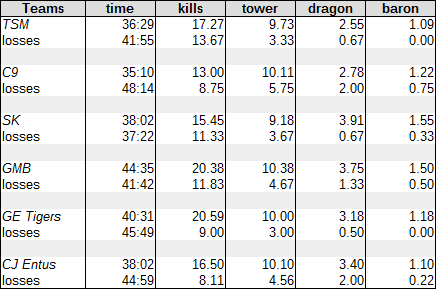 A quick look at the IEM teams and how they play.
Unfortunately the lolesports site does not include match history for LPL/LMS; that means no stats for Team WE or Yoe Flash Wolves 🙁

First off, we see how many fewer games the LCS teams have played compared to the Asian teams. The Bo2/Bo3 match format used in LPL and OGN (respectively) adds up to far more individual matches.
We also see three distinct tiers of performance in their respective regions. GE, SK, TSM, and Yoe are all top of their standings, though SK and TSM have not been quite as dominant as GE and Yoe. Next we have the CJ (3rd), C9 (3rd), and Gambit (4th) tier, of teams in the top half of the pack. And finally we have WE, coming in in bottom of the LPL standings (12th place, which is impossible in the other leagues).

Next lets look at overarching playstyle differences.
We just pull the stats from match history for (most of) the teams, and can compare statistics like average game time, kills, towers, dragons, and barons. This will give us an idea of what the teams prioritize in their matches, both for wins and losses. The numbers are given in average per-game.

Thoughts:
NA teams have lowest average game time in wins.
All but the EU teams have longer games in losses than wins.
Cloud 9 have the least kills in their games, especially their wins.
GE Tigers and Gambit have the most kills; their losses are characterized by less kills than normal.
Cloud 9 take the most towers and dragons in losses.
TSM takes the fewest Dragons in wins, followed by Cloud 9; may be a regional thing.
EU teams average the most Baron takes, though nobody averages more than 1.5 per game.
GE Tigers are really good – they have only 2 match losses, and have never lost a Bo3 series. And 1 of those 2 losses came against the best player in the world on his best champion (8-0-6 LeBlanc).