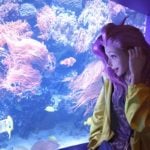 League of Legends is having one of its best years as long as champion releases go. Riot Games has already introduced three champions so far, Sett, Yone, and Lillia. Though the recent leaks regarding the next champions of 2020 mainly revolve around Samira, Riot has been dropping subtle hints for one more champion, Seraphine.

Unlike other champions that became a part of the gigantic roster through the years, it’s almost impossible to find Seraphine’s traces in League’s lore. This could change in the future since Riot hasn’t officially announced the champion.

Even though Seraphine’s background is foggy for now when it comes to her relations and interactions with other champions, we still know quite a bit about her thanks to her social media presence.

According to her Twitter and Instagram bios, Seraphine is an aspiring songwriter/producer that currently resides in Los Angeles and who has big dreams. Seraphine mostly tweets and shares posts like a regular person. She retweets inspirational quotes, shares her cover songs, and posts many pictures of her cat.

While it’s impossible to draw a character map based on her posts, some of her tweets actually tell a lot about her when observed carefully. Seraphine recently shared her version of K/DA’s hit song “POP/STARS,” she’s a big fan of the group, and the chances are she’ll be the newest addition to the band.

It’s also quite possible Seraphine has a Chinese origin. She sometimes tweets in Mandarin, and she recently shared a screenshot of a conversation between her and his dad in which her dad responded in Mandarin.

There have been some League Easter eggs buried in her pictures as well. Fans located Tibbers, Annie’s trusty companion, plushy in one of her photos. Though this hardly means anything by itself, it could potentially be a teaser of a dialogue that Seraphine has with Annie.

As far as her League status goes, she’s most likely a mage and a sensational one at that.

Her League lore confirms that she’s an artist and one of the most popular ones in Runeterra, at that. Originating from the streets of Zaun and Piltover, Seraphine just wants to make it in the show-business.

Riot officially revealed Seraphine and all of her abilities on Oct. 12. Though most fans thought she looked like an alternate version of Sona, Seraphine is packed with a much more skill-shot oriented kit. This means there will be a steeper learning curve for the champion, and players with precise hands will be able to thrive while playing her.

Every third basic ability Seraphine casts will echo, automatically casting a second time. Additionally, whenever she casts an ability nearby an ally, she will create a Note. Each Note gives her basic attacks more attack range and deals additional magic damage, consuming the Note.

Seraphine surrounds her nearby allies in a song, granting herself and her allies movement speed and a shield. If Seraphine is already shielded, she can heal her nearby allies, restoring health based on how many allies are near her.

Seraphine unleashes a heavy soundwave, dealing magic damage to enemies in a line and slowing them. Enemies that are already slowed are rooted, and already rooted enemies are stunned.

Seraphine takes the stage, projecting a captivating force that charms enemies and deals magic damage. Any champions struck (allies included) become part of the performance, extending the range of the ability and granting allies maximum Notes.

When does Seraphine release on live servers?

The aspiring superstar, Seraphine, is set for an Oct. 29 release. The new champion will go live alongside Patch 10.22 and will debut with her ultimate skin.

Seraphine’s social media activity until her release suggested that she’s a huge K/DA fan, and her ultimate skin will feature Seraphine collaborating with the virtual K-Pop band.

Seraphine’s ultimate skin will be available as a bundle, retailing for 3250 RP. It’ll be packing two icons, one emote, and a border to let you show off how much of a Seraphine fan you’re.

This article will get updated as more information regarding Seraphine becomes available.