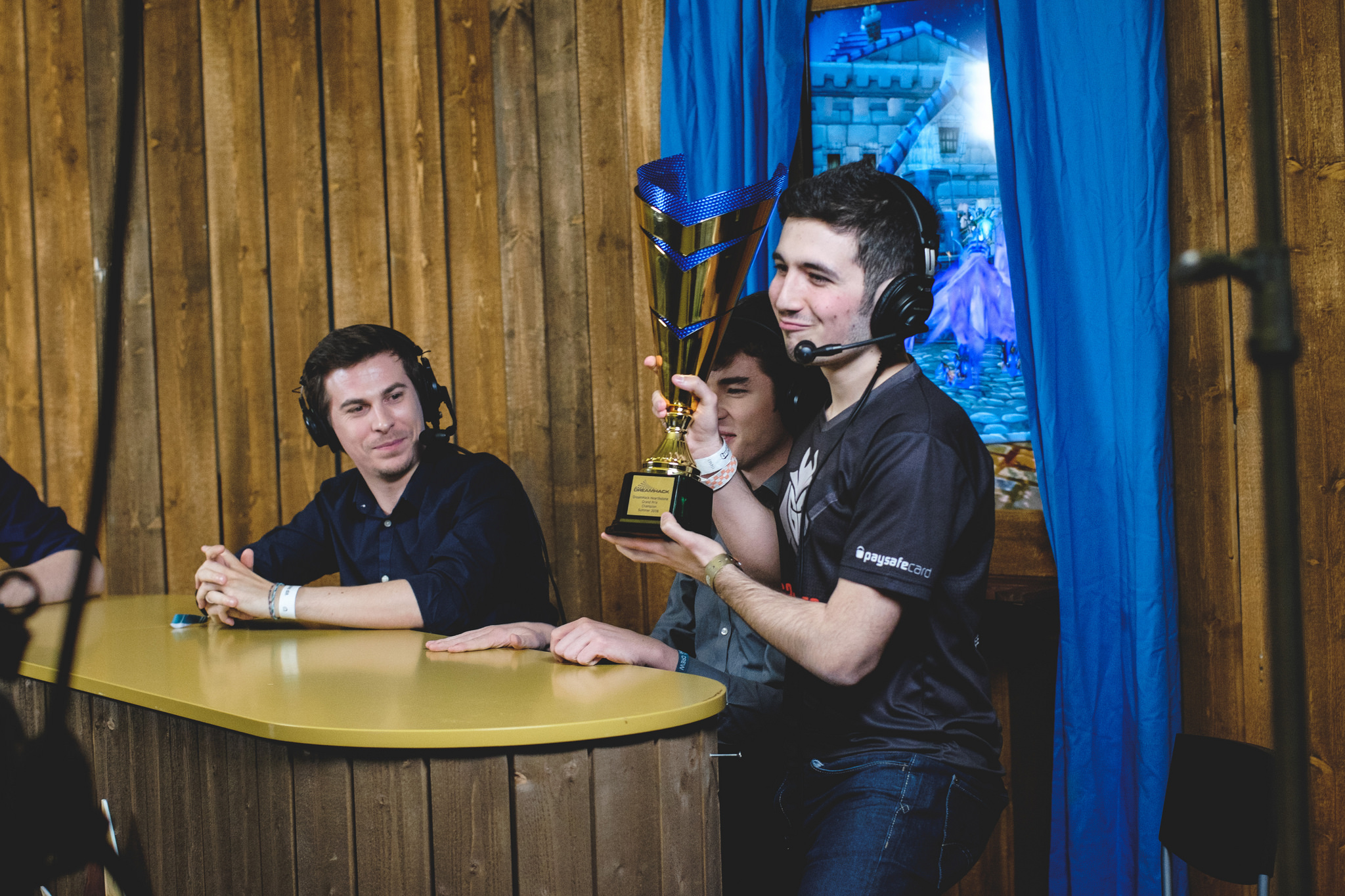 Dima “Rdu” Radu is one of the best competitive Hearthstone players of all time.

That sounds like hyperbole, but it’s true. Only a handful of players have won as many trophies as he has, with two DreamHacks and a Truesilver Championship to his name. He won the first major Hearthstone tournament at DreamHack Summer 2014, and hasn’t stopped winning since.

But last weekend he achieved something that had eluded him throughout that three year career. He finally qualified for a Blizzard championship—the Hearthstone Spring Championship in Shanghai—after three failed or blocked attempts.

Dot Esports spoke to Rdu about his journey, the current meta, what makes him so consistent, and life without Lifecoach.

You’ve finally qualified for a Blizzard championship in your fourth year of trying. How does it feel to have finally got this monkey off your back?

It’s definitely a good feeling, but I think there are multiple factors for why I haven’t performed in HCT [or the World Championship qualification]. The most important one was that when I felt I was at my best in 2014, and the format was Last Hero Standing which I like way more than Conquest, Romania wasn’t eligible to participate at the World Championship. In that year, I couldn’t do it. I could only do it the past two years. In the year Ostkaka won I was pretty close, I think I was like one or two games away from getting top eight and getting to regionals. I lost to Maverick, I remember, after beating people like Crane. So very very close. Last year, I failed horribly in all the prelims and at Last Call I was one series away. I dunno, it was just average performances, nothing stellar.

What was it like last year, when you came within one game of going to the World Championships only to lose out?

It was a very weird thing. I knew I didn’t have that many chances going into it, and I just tried to play my best and bring some interesting stuff. It worked well for the first two series. But then in a series where I thought I was favored, I lost to Pavel. It was very exhausting to play three best-of-sevens in one day. If you watch Bahamas (the Winter Championship) and all the other HCT events, even this playoffs, it’s more relaxed. You don’t play that many games. It’s still a very high pressure situation, but because you play less you can think a bit more. Playing three best-of-sevens in one day is not the best experience, especially when you are a bit rushed by the schedule. For example I didn’t have time to properly think through the bans.

What was it like to watch Pavel win the World Championship? Did it soften the blow because you lost to the guy that won, or make it worse because he won from what could have been your spot?

I dunno, I have a different way to look at things. I don’t think if somebody beats someone that he’s clearly better than him. He might be clearly better on that specific day, but I think it’s very important what lineups you bring to tournaments. Like if you bring a really solid lineup and you really know your decks, you might be the best player in the world for that day. but if the meta shifts around you might not be. It definitely felt really good to see Pavel finally getting rewarded for how he plays. I was definitely not sad losing to him specifically, because he was a player who was always trying to play fair, he was always trying to play as well as he could, and he never had voiced any concerns. You see all the pro players, including myself, like to complain about the state of the game, the state of tournaments, game formats. Pavel just doesn’t care, he plays the game and enjoys it. And he’s really really good at it. But now it’s my time.

You made your name winning DreamHack Summer 2014, but also because of the controversy at that event where someone sent you messages of what was in your opponent’s hand to try and get you in trouble. How do you feel about that looking back?

It still feels super bad, every time I achieve something someone is always on Reddit saying “oh is this the guy who cheated?” People just read the title of some news from some time ago, and don’t even look into it, and then throw accusations around. It’s pretty hurtful.

I wouldn’t call it sabotage what happened, but the guy was jealous and tried to fuck around, and didn’t know that it would blow up so hard. If I knew I would just have deleted my whole friend list before the tournament, but I didn’t have that much life experience and assumed that people wouldn’t do that kind of thing.

You are one of only a handful of players to have won a major championship in every year of Hearthstone so far—DreamHack Summer in 2014 and 2016, and the Insomnia Truesilver Championship in 2015. How have you stayed so consistent through the years of changing meta?

I just like card games, and I play a lot. I think about the game a lot. I think I’m just really good at getting a feel of the meta game, and then I can almost always bring optimal decks compared to my opponents. If I also put in the time to learn these optimal decks and know them in and out I’ll perform really well. The tournaments where I haven’t performed well are where I’ve only had time to come up with the lineup and haven’t known my decks in and out, or played some decks I’m not totally comfortable with. In the meta game, there’s so many good decks that should have potential to be brought to tournaments that it’s impossible for a pro player to learn each and every one of them. So you have to focus on some. I was making the mistake of trying to know a little about everything, but that’s really not correct I think.

Related: The 10 people who made Hearthstone matter in 2014

Which of your trophies is your favorite?

The Insomnia one is the best quality one, I guess I like that one the most. I took the DreamHack one on the plane home, and it was one of the worst experiences of my life. I was so sad when I got home. I left the hotel very early and walked to the train station for like an hour, with the trophy in my hand. Then I took the bus for two hours, after waiting for an hour. Then I took a plane, waited in the airport for an hour then took another plane. They didn’t have any extra space, so I had to keep it in between my legs and everyone was looking weirdly at me. I had no legroom and it was pretty annoying.

You brought four aggressive decks to the EU Playoffs. Do you think a full aggro strategy is the best way to go in Conquest right now?

I think it last weekend [At Playoffs] it was the best strategy, to play all aggro without playing Paladin. I expected a lot of people to bring Paladin, Jade Druid, and Rogue. I also expected a lot of people to catch the bait and play OmegaZero’s Secret Mage. I tried that out and realized it’s going to be super bad in the current meta game, but a lot of people got baited into playing it and they did awfully except Hoej. I don’t really understood how he got to top eight with it, even Hoej said that it’s bad.

We’ve just had the set rotation to the Year of the Mammoth, as well as the release of the Journey to Un’Goro expansion. What do you think of the meta game right now?

The meta game keeps evolving, and I think will keep evolving for quite a bit. There are still some areas that need to be explored. For example, Silence Priest is a deck that probably has to be explored some more. Shaman archetypes have to be explored some more. Both Elemental Shaman and the type of version I brought with Bloodlust. We’re probably going to see a very different meta at Americas Playoffs and APAC Playoffs, and a very different one at the tournament in Shanghai.

Your G2 Esports team mate, Adrian “Lifecoach” Koy, has stepped away from the team and from Hearthstone all together saying he is “fed up” with the game. What do you make of his decision, and what did he bring to the team?

Lifecoach has always been an example to me, I always try to follow his path because he’s such a unique person. I think I learned a lot, not only in Hearthstone but also in life, from Lifecoach. So I’m very grateful for what he did for me and Thijs. Now I think it will be hard for us to find someone who can fill his shoes. It will be impossible, we have to do something else. Right now the G2 roster is just me and Thijs, and we will see soon if someone will join. I can’t really talk about it. I think we need a third for potential team leagues.