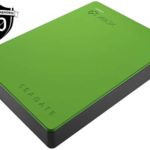 Consoles offer a great deal of value when it comes to pure gaming performance. There are three different Xbox One versions, and each comes with varying solutions of storage ranging from 500GB to 2TB. While even the 500GB version may sound like enough, modern games like Call of Duty: Modern Warfare alone can take up more than 150GB of your storage, limiting your number of games that are ready to play.

This may force you to uninstal some of your games to make room for others. Though having a fast internet can make up for the time, downloading a huge-sized game can take hours or even days for those with a slower connection, making an external hard drive a must-have to keep your extended game library at arm’s length.

An external hard drive is a compact and portable storage device that you can connect to your Xbox One with a regular USB cable. External hard drives serve as a great way to support your system with extra disk space, and their portability allows you to carry your games wherever you go.

Picking the perfect hard drive for your needs can be time-consuming since making sure that the hard drive of your choice supports at least USB 3.0 and has enough space for your gaming requirements is only the tip of the iceberg. External hard drives come in all shapes and sizes, meaning you should also consider buying one that suits your style.

We’ve compiled some of the best external hard drives on the market to save you some time on research and take your gaming experience on Xbox One to the next level. 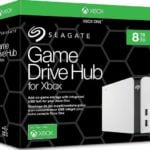 Even if you aren’t a frequent shopper of games, your library can pile up quickly with an Xbox Game Pass.

Seagate’s Game Drive Hub is one of the fastest external hard drives you can get for your Xbox One. It has a writing and reading speed of 220 megabits per second, alongside its 8TB of capacity. The Game Drive Hub also doubles as a USB Hub, which increases its usability even further.

If we were to estimate an average Xbox game’s size as 55GB, this state-of-the-art drive could carry up to 145 games inside. All of this functionality increases the hard drive’s weight, however, putting it at 1.96 pounds. 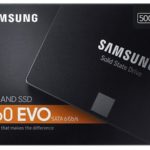 While external hard drives are cost-effective when it comes to their storage capacities, they may leave you wanting for more if you’re after faster loading times. SSDs cost quite more than hard drives, but no hard drive can match their speed.

Samsung 860 EVO is a popular SSD that offers the best bang for your buck. It comes in five different sizes ranging from 250GB to 4TB. The 1TB and 2TB options are great for storing the just-enough number of games while assuring the fastest transitions to cutscenes.

The hard drive offers Up to 550/520 megabit per second writing and reading speeds, respectively, and you’ll need to invest in a couple of dongles to set it up properly. SATA SSDs don’t come with USB ports. A simple USB 3.0 enclosure device will be enough to get your SSD working with your Xbox One, and they usually cost around $5-10. 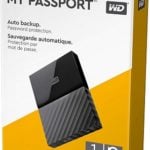 The higher the storage capacities get, the higher its size gets as well. A compact HDD can be especially useful for anyone who travels a lot with their console and enjoys bringing their games with them.

Western Digital’s cloud storage and 256-AES encryption solutions also separate it from its competition by making it one of the easier portable hard drives to backup. The non-gamer design also gives the hard drive a subtle look and makes it the perfect choice for using in professional environments like offices.

Seagate Game Drive for Xbox One 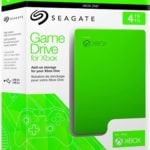 Specs define proper hardware while looks define your sense of style. Most external hard drives and SSDs in the market come with a pretty generic appearance that usually stands out in your console-setup. Seagate’s Game Drive, on the other hand, was specially designed for Xbox users both in terms of specs and style.

The Game Drive comes with two color options being green and white, which feature the iconic Xbox franchise look. The 2TB hard drive is as compact as it gets and has a decent reading/writing speed at 140 megabits per second.

The hard drive also comes with a one-month long Xbox Game Pass membership, which further increases its appeal if you are already thinking about extending your subscription.

Most hard drives are built to last, and they can withstand a couple of low height drops, but it may only take a single hard blow to knock them out for good. Rugged hard drives may look bulky and ugly, but their durability allows them to withstand the test of time and a thousand falls to hard surfaces.

Silicon Power’s Shockproof External Hard Drive looks like a shrunk backpack and comes in three different storage options. Two, four, and 5TB of storage are all enough to store at least 40 games that each take 50GB of space.

Its military-grade shockproof plating is accompanied by a decent 103 megabit-per-second reading and writing speeds. Though its size makes it impossible to carry it in your pockets comfortably, it should be able to hold its own fine in a tightly fitted bag. 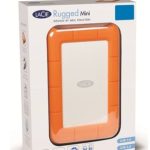 Durability can mean a lot of things. While some of the hard drives on our list can take a good beating and last you for more than 10 years, they aren’t dust or splash resistant, making them easy prey for toddlers or naughty pets.

Don’t let the name “Mini” fool you since Lacie’s Rugged External Hard Drive can still be considered as decently sized. You can choose between five different storage options: one, two, four, five, and 8TB. On top of being drop-proof, thanks to its rubberized and rugged corners, the Lacie Mini is also splash and dust resistant. Considering dust is the number one factor behind electronics overheating not performing like they used to, getting a Lacie Mini can be a wise investment if you’re looking to use it for the most interminable foreseeable future.

The hard drive offers writing/reading speeds up to 130 megabits per second, and its complete durability package raises its price tag a bit compared to its rivals. 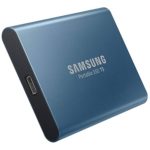 SSDs carry significantly higher price tags, mostly due to their writing and reading speeds. Despite looking similar in terms of looks, the worst SSDs tend to be at least four times faster than the best hard drives.

While most SSDs will require you to use a USB 3.0 enclosure to get them working with your Xbox One, portable SSDs feature the same plug and play characteristics like a standard external hard drive.

Samsung’s T5 Portable comes with three storage options, 500 GB, one, and two TB. Each version offers writing and reading speeds up to 540 megabits per second. SSD’s are also a lot more compact than the most external hard drives, making them a strong candidate if you’re looking for something that’d fit into your pocket.

How to set up an external hard drive or an SSD on Xbox One?

Almost all external hard drives and portable SSDs require you to plug them in and let them do their magic. Once you plug them to your Xbox One through a USB port, your console should automatically detect it. If nothing happens, try turning off your console and turning it back on while your hard drive is still plugged in.

Your console should greet you with a pop-up that lets you know that a new storage device was detected. Navigate through the setup process, and your Xbox One will start reformatting your hard drive, wiping everything inside, and getting it ready for gaming usage.

Name your hard drive to finish the process and make sure to pick it when your system asks where it should download your games, above your internal storage.