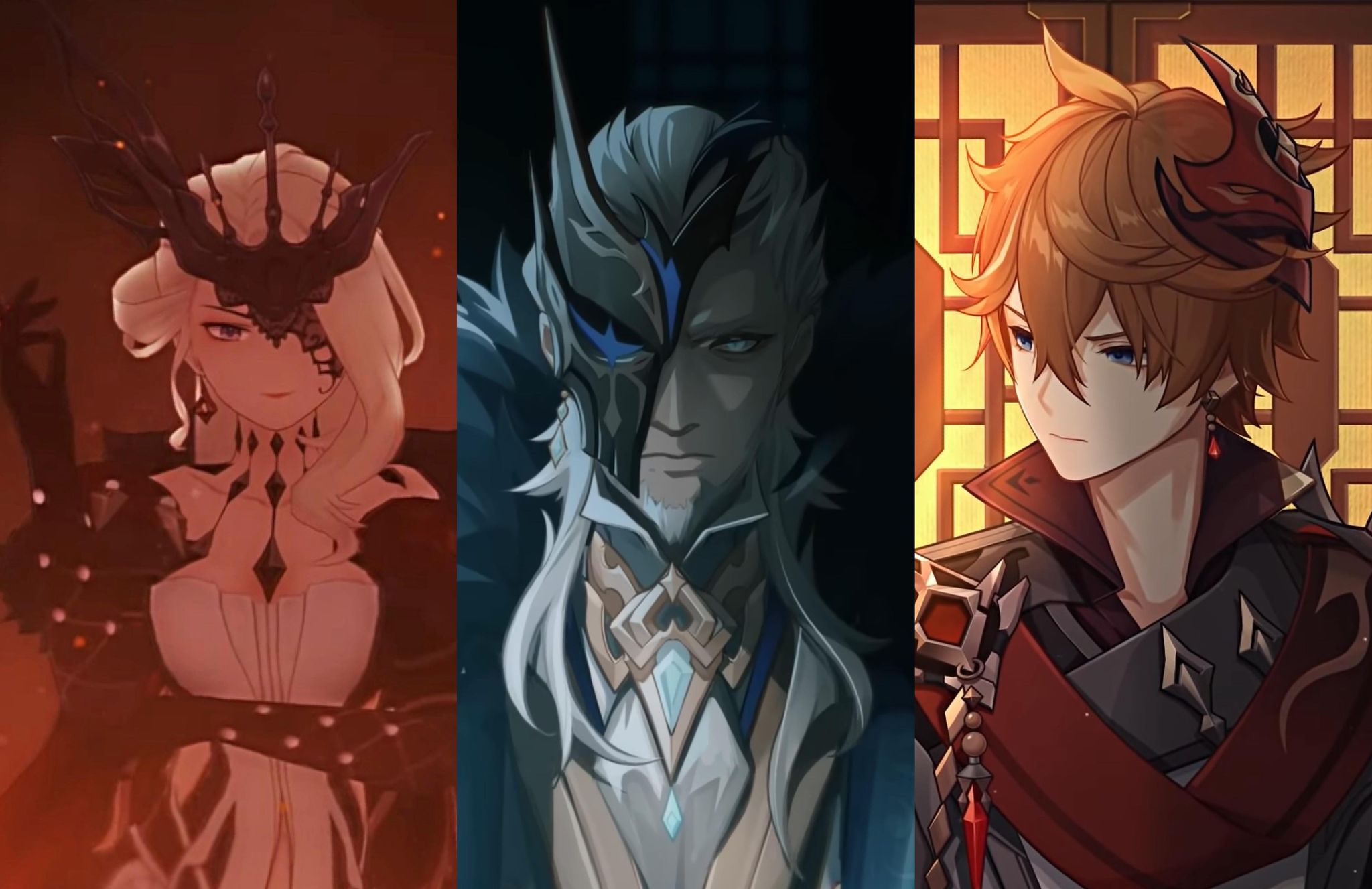 Regular Genshin Impact players are very familiar with the Fatui, a group driven by an insatiable desire for power and control. The Fatui is a faction that consistently clashes with the Traveler and is antagonistic towards everyone outside their group.

Much of the group’s backstory and goals are unclear but it is evident they will utilize fear and intimidation to gain power. The Fatui are a strong military force and are regarded as the most powerful military force among the seven nations.

The intimidating group is led by 11 Fatui Harbingers, who report directly to Tsaritsa, the Cryo Archon. Tsaritsa is the ultimate leader of the Fatui, but has not yet been featured in Genshin, except by name.

The Cryo Archon is known to grant some of her follower’s Delusions, which are like Visions but only allow the user to manipulate elements for a price. Wielding a Delusion can have very negative side effects such as draining the user’s lifeforce or backfiring on them. All 11 Fatui Harbingers are believed to possess one, although whether this is definitively true is currently unclear.

While the 11 Fatui Harbingers are overall pretty mysterious, miHoYo has shared a teaser that grants players a bit more insight into them and dropped hints about them through gameplay. For players hoping to learn all there is to know about the imposing group, here is a complete breakdown of all that has been unveiled about each member thus far.

All Fatui Harbingers in Genshin Impact

The leader of the 11 Fatui Harbingers is Pierro, a formidable-looking man who is also the very first member of the Fatui. Most of his history is a mystery, but players have learned bits and pieces through gameplay and received small teasers from miHoYo.

It is known that Pierro tried to pander to a past ruler of an unknown nation but failed and some kind of immense destruction resulted that he was unable to stop. This event made him bitter and led to him joining Tsaritsa’s cause.

After he joined Tsaritsa, Pierro went around seeking talented recruits for their cause. He recruited many members of the Fatui Harbingers including Il Dottore, and La Signora but is suspected to have recruited most of the others as well.

Pierro is also the grand mastermind behind the prolonged war in Inazuma. He led the Fatui in manipulating things behind the scenes so that the group could create more Delusions and have things unfold as they desired.

Not much is currently known about Pulcinella although he is thought to be calculating and intelligent based on what is known about him. He is also the one who recruited Tartaglia to the Fatui.

The sixth of the 11 Fatui Harbingers is quite a wildcard. Scaramouche is very arrogant and generally disliked by all who know him, even his fellow Fatui Harbinger members. He is wildly unpredictable but immensely clever which makes him extremely dangerous.

Scaramouche was originally created by Ei as she tested out the idea of making a puppet body. Because creating him was successful, Ei went on to make her actual puppet with the Raiden Shogun. She was going to have Scaramouche serve as the vessel for her Gnosis but deemed him too gentle for such an important task and allowed him to leave and do as he pleased.

He then wandered around and got into a few tough situations before stumbling upon the Fatui and deciding to join them. They helped him to unlock the impressive powers lying underneath due to his creation by an Archon, made a few other adjustments to him, and he then climbed the ranks of the Fatui until he became a Fatui Harbinger.

Later on, Scaramouche obtained the Electro Archon Ei’s Gnosis in an exchange Yae Miko made to save the Traveler’s life. He was supposed to report back to the Fatui immediately after this with the Gnosis but did not. Speculations indicate that he may have gone rogue with this fact and his other unpredictable behaviors taken into account.

Tartaglia went searching for him but was not able to find him. Because he did not return when he was supposed to and has not been able to be found, Scaramouche’s status with the Fatui Harbingers is currently uncertain.

Rosalyne-Kruzchka Lohefalter, who is more commonly known as La Signora, was the eighth member of the Fatui Harbingers. She was the “Crimson Witch of Flames” and possessed fire-based powers. Upon joining the Fatui she was also given a Cryo Delusion by Pierro to help keep her dangerous flames at bay.

La Signora used to be a normal woman but upon losing her love Rostam to the cataclysm turned bitter and filled with rage. She then utilized liquid fire to turn herself into a living flame.

She would have lost her life to the flames had Pierro not found and saved her. He recruited her to the Fatui and she immediately became known as the eighth member of the Fatui Harbingers, La Signora.

La Signora was on a mission to capture all Archons Gnoses for Tsaritsa’s unknown goal, but since she is now deceased it is likely a different member of the 11 Fatui Harbingers will now take up the job. She was killed by Ei after losing in a battle against the Traveler before the throne.

Before she was executed, La Signora successfully captured the Anemo Archon Venti’s Gnosis in a traumatic scene that turned the Traveler fully against the Fatui and peacefully gained the Geo Archon Zhongli’s Gnosis through a contract. This means that Tsaritsa currently has two Archon Gnoses thanks to La Signora.

The ninth member of the Fatui Harbingers is Pantalone. He is an extremely wealthy man who was originally born into poverty.

His poverty made him unable to receive a Vision which in turn led to him distrusting and despising the gods. This ultimately led to him gaining massive wealth, joining the Fatui, and becoming the overseer of Snezhnaya’s economic policies.

While many other members of the 11 Fatui Harbingers were chosen directly by Pierro, Tartaglia was brought into the general Fatui by Pulcinella and had to climb ranks all the way up to the Harbingers. He has described himself as “kind of a bad guy” and this fact is evidenced by his consistent dedication to chaos and violence.

He is all-around an unpredictable danger-seeker who is always up for a challenge. Tartaglia may be the youngest member of the Fatui Harbingers but he should not be underestimated as he is a highly driven warrior who will stop at nothing to fulfill his goals.

His relationship with the Traveler is quite complicated as the Traveler does not trust the Fatui one bit. However, Tartaglia respects the Traveler and considers them a friend. Thus, players are on somewhat of good terms with him despite their feelings for the Fatui as a whole.

Tartaglia possesses a Hydro Vision and an Electro Delusion. Both cannot be used during gameplay by players, but those hoping to see both in action will experience it during the main storyline and may later repeatedly take on Tartaglia in the “Enter the Golden House” weekly boss fight.

The ruthless Il Dottore has almost no regard for human life and is quite heartless. He absolutely despises those who wield Visions which probably led to him joining the Fatui. Il Dottore seems to be regularly engrossed in projects and experiments.

Il Dottore was pushed out of his home following his suggestions and experiments that centered around creating humans who were enhanced to be more powerful than the gods. While attending Sumeru Academia, Pierro invited him to join the Fatui and promised they would help give him access to resources for his experiments. He agreed and joined their ranks and gained the title of “The Doctor.”

Nothing is currently known about Capitano beyond him being a member of the 11 Fatui Harbingers and his official appearance, which can be viewed below.

The only currently known fact about Sandrone is in regards to her unique appearance. She seems to be carried everywhere by some kind of modified, imposing Automaton. The duo can be viewed above.

Arlecchino is another member of the 11 Fatui Harbingers and is known to run an orphanage called the House of the Hearth. Orphans adopted by this house are raised as Fatui and later sent on various missions across Teyvat as they grow up.

Outside of her role running the orphanage, nothing else is currently known about Arlecchino. However, her appearance was unveiled alongside the rest of the 11 Fatui Harbingers and can be viewed above.

Nothing is currently known about Columbina beyond her appearance. She first made her debut in the Fatui Harbinger teaser alongside the rest of the group and can be seen below leaning on La Signora’s coffin.