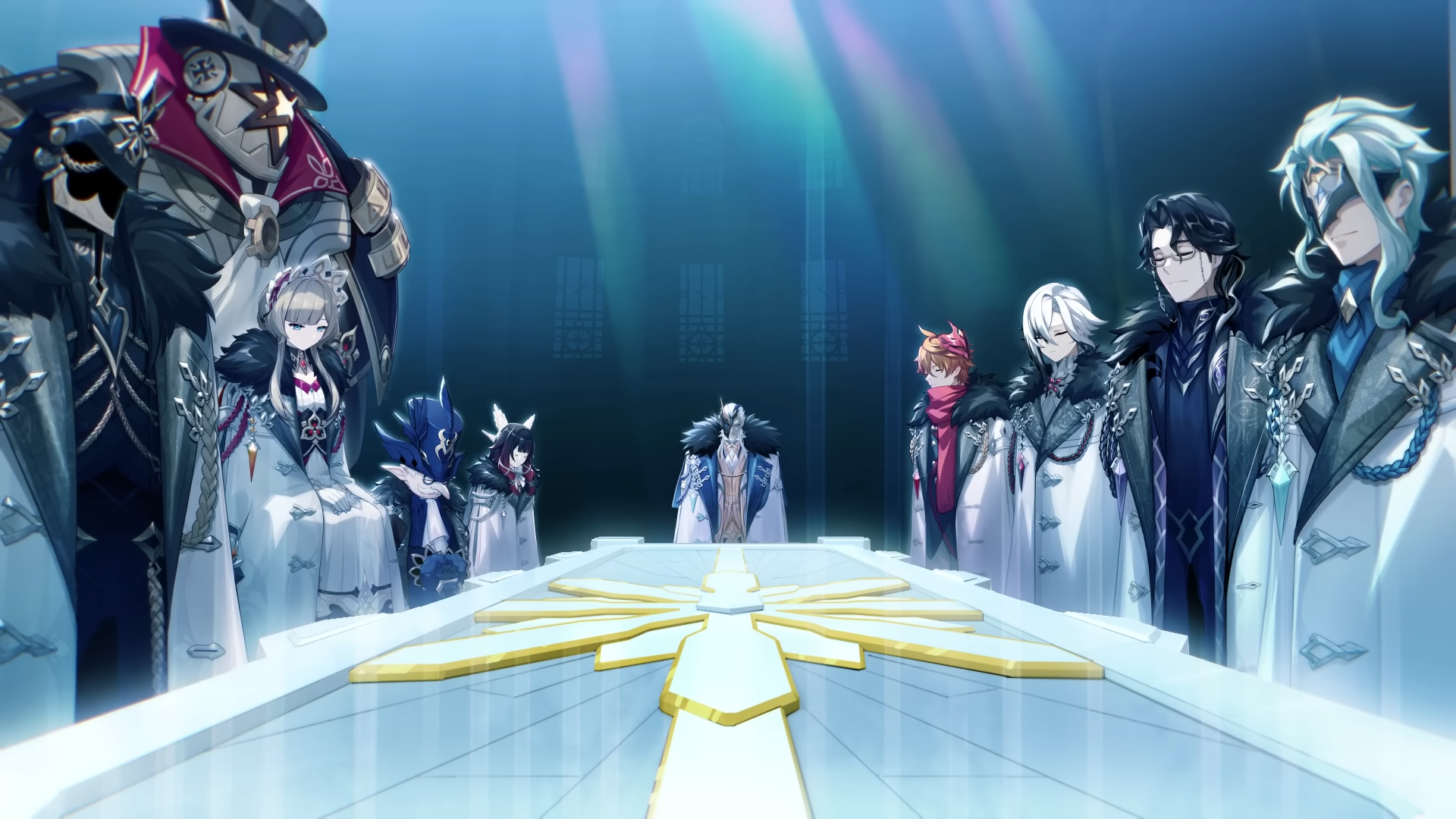 Of all the foes that players regularly come into contact with in Genshin Impact, the Fatui are one of the most menacing, mysterious, and malevolent. The Fatui are an organized faction led by the 11 Fatui Harbingers as well as Tsaritsa, the Cryo Archon herself.

The teaser features all 11 Fatui Harbingers meeting to mourn the loss of La Signora and the group also reveals that her name is Rosalyne. It opens with the first Fatui Harbinger, whose name is Pierro, monologuing vengefully while playing chess in a manner that is very typical of villains. La Signora’s signature butterfly flies into the scene and lands on a pawn that was just knocked over to symbolize her recent death.

The scene then shifts to show all 11 Fatui Harbingers gathered around a coffin. One of the 11, whose name is Columbina but whose number is unknown, is leaning on it mournfully. Fatui Harbinger number five, who is named Pulcinella, explains that the group is gathered there to remember the sacrifice of their “dear comrade” La Signora.

Pulcinella says that all work will be halted for half a day in remembrance of her and so that the nation can mourn her passing. The scene then shifts to Pantalone, who is the ninth member of the Fatui Harbingers, as he laughs at it only being half a day. More banter on the situation occurs and develops into a heated discussion among the group before the scene shifts to Tartaglia as he attempts to diffuse the situation.

The only missing member of the group besides the deceased La Signora is Scaramouche, who the group briefly mentions. They mention him in relation to a “Gnosis from Inazuma,” which he was sent on a mission to steal. Scaramouche was supposed to return after collecting it but clearly has not as he is missing and the group is pondering what he is up to and reflecting on what his next move may be.

The screen fades to black before revealing Il Dottore, who is another member of the Fatui Harbingers whose number is unknown, as he stands in front of a fiery tree. Two unknown characters can be heard conversing over this scene and refer to Il Dottore as “The Doctor.”

Lastly, the teaser jolts to show Collei, a recently unveiled Dendro character, as she awakens in confusion. Tighnari, another upcoming Dendro character, calls to her and she says she’ll be over soon before she questions what just happened. This seems to indicate that she had some kind of vision or nightmare that showed her the same scenes of the Fatui Harbingers that players saw.

Because the teaser ends with Collei, who is expected to arrive early on in the Version 3.0 update, it is believed that the storyline teaser is previewing what’s to come with that same update. This means that players can likely expect the Fatui Harbingers to become much more involved in Genshin Impact’s storyline in the near future since they are certainly planning something devious.